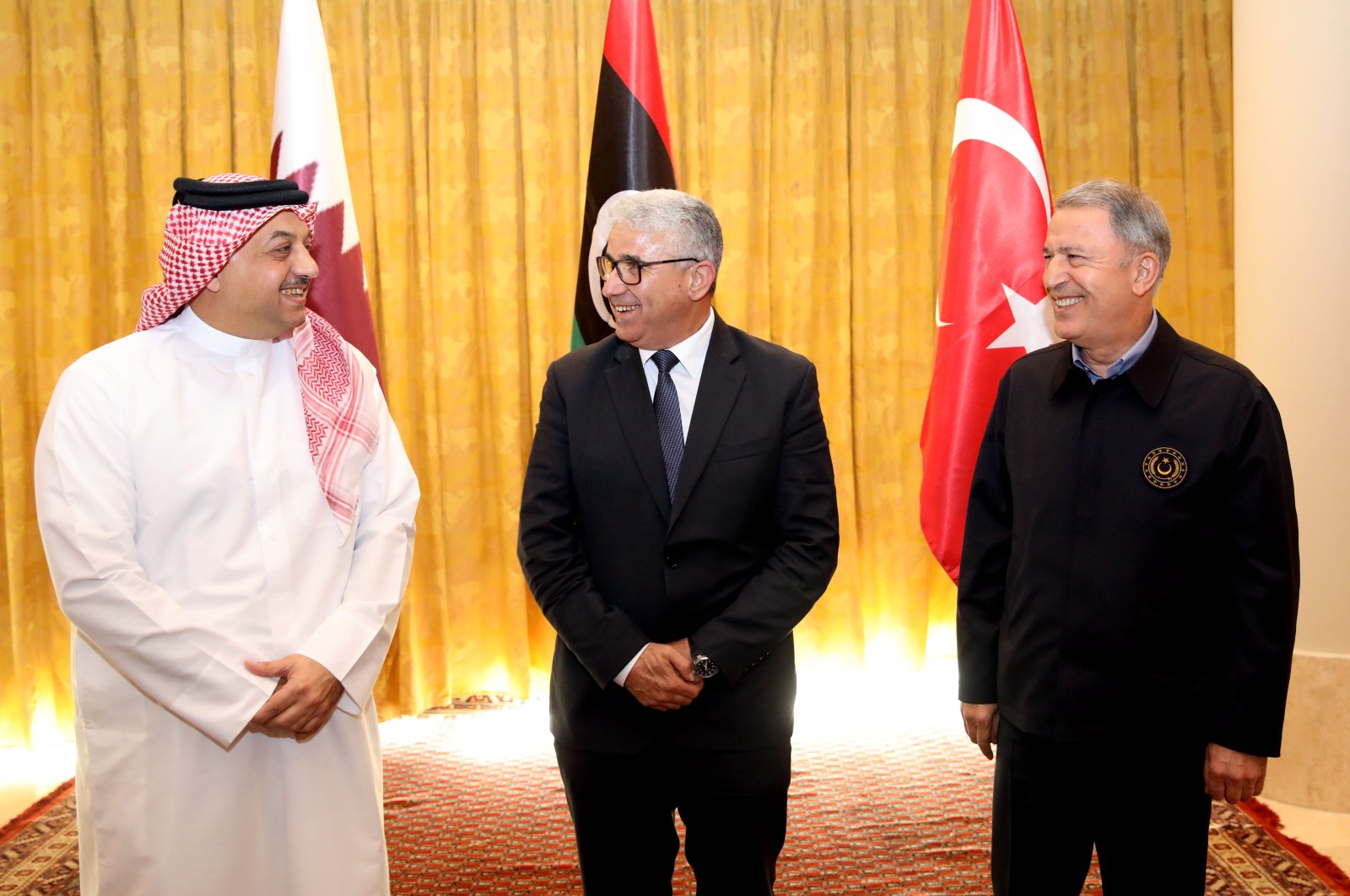 Turkey is committed to ensuring Libya's territorial integrity and will continue to support humanitarian, development projects there, Defense Minister Hulusi Akar said after returning from a trip to Tripoli Tuesday.

Presidential Spokesperson Ibrahim Kalın, in the meantime, said Ankara is in favor of a political rather than a military solution in the country.

Speaking to reporters about his Tripoli visit, Akar said his meeting with Libyan officials and his Qatari counterpart Khalid bin Mohammad Al Attiyah was productive. I expect the discussions to produce fruitful results for the Libyan people, he said.

"Upon the instructions of our president, we will continue to stand with our Libyan brothers, with whom we share a history that goes back some 500 years. We will strive to ensure the security and prosperity of the Libyan people," Akar told reporters.

He noted that Turkey has been sharing its military resources and providing training to the Libyan Army as part of a cooperation agreement signed last year.

"We’ve also been carrying out our humanitarian activities and provide all types of support for hospitals," Akar said, adding that Turkish security forces are also involved in demining operations in areas freed from the forces of putschist Gen. Khalifa Haftar.

He further said Turkey backs the U.N.-supported Government of National Accord (GNA) in Libya and is committed to the country's territorial integrity and political unity.

"Everyone can see what the other side has been doing," he said, referring to the attacks of Haftar militias and mass graves found in the city of Tarhuna.

Libya's Deputy Defense Minister Salah al-Namroush on Monday also announced that his country has agreed with Turkey and Qatar to sign a tripartite deal for military cooperation to boost the capabilities of the Libyan military.

According to the media office of the government-led Burkan al-Ghadab (Volcano of Rage) Operation, al-Namroush said Turkey and Qatar will establish facilities in Libya for military training and consultancy.

Al-Namroush added that Turkey and Qatar will also send military consultants and personnel to Libya as part of the deal.

The visiting Turkish and Qatari ministers emphasized that they support a political solution and Libya's legitimate government, he added.

He also visited the Defense Security Cooperation and Training Assistance Advisory Command that was established as part of a memorandum of understanding between Turkey and Libya.

Libya has been torn by civil war since the ouster of late ruler Moammar Gadhafi in 2011. The government was founded in 2015 under a U.N.-led agreement, but efforts for a long-term political settlement failed due to a military offensive by forces loyal to warlord Haftar.

The U.N. recognizes the GNA as the country's legitimate authority, as Tripoli has battled Haftar's militias since April 2019 in a conflict that has taken more than 1,000 lives.

Turkey continues to support the internationally recognized government, but Haftar has been backed by Russia, France, Egypt and the United Arab Emirates (UAE).

Akar’s visit coincided with that of German Foreign Minister Heiko Maas, who came to spur international efforts to resolve the country's long-running conflict. It was Maas' first visit to Libya following a summit in Berlin in January when world powers agreed to a peace process for the war-torn country that has largely fallen flat.

Maas was scheduled to visit the UAE the next day, to urge the Abu Dhabi administration to stop sending military support into Libya – one of the commitments agreed to at a peace summit held in Berlin in January, whose resolutions have so far made little difference on the ground.

Turkey, Qatar and other allies that have backed Libya's legitimate government are there to support a political solution in the war-weary country, Turkish presidential spokesperson Ibrahim Kalın said Tuesday.

Kalın told Al Jazeera that Turkey was concerned that military elements had been building up in the Libyan cities of Sirte and Jufra for a year, posing a threat to the country's peace and territorial integrity.

Noting that Turkey rejected both official and nonofficial plans regarding the disintegration of Libya, Kalın emphasized the Turkish administration did not seek military solutions anywhere in Libya.

He added that Ankara did not want to confront any foreign country in Libya. Egypt, for instance, is a neighbor of Libya and could adopt a constructive role to resolve the conflict, he said.

However, the presence of Russia's Wagner Group mercenaries and other foreign mercenaries the UAE brought in from countries like Sudan, Niger and Chad are a source of concern for Turkey, he said.

He added that ridding Sirte and Jufra of weapons and mercenaries could be a good step toward stopping clashes and open a window of opportunity for a political solution in the country, adding that this process had to be conducted fairly and transparently.

Noting that President Recep Tayyip Erdoğan and his Russian counterpart Vladimir Putin recently held a long phone conversation on developments in Libya and Syria, Kalin argued that the two powers could cooperate in Libya as they have in Syria.

Kalın said Russia supported Haftar despite Moscow denying such claims but noted that the Russian administration had sought to act as a mediator between the conflicting sides in Libya.

Kalın noted that he believes a political solution could still be achieved in Libya and Turkey would be glad to see any country including Egypt, Qatar, Germany, Russia and Italy contribute to that process.

Defense Minister Akar also touched upon recent tensions in the Eastern Mediterranean, saying that Turkey’s actions in the region are in line with international law, as it tries to protect the interests of itself and the Turkish Republic of Northern Cyprus (TRNC).

"Our work is open and transparent and respects the rights of our neighbors as we reiterate that we are in favor of good neighborly relations," Akar said.

He also criticized the recent agreement signed between Greece and Egypt, saying it is against the interests of the people of both countries.

"We invite everybody to use common sense and expect all to realize that fait accompli and distortion of incidents will not get them anywhere," Akar said, adding that Turkey will continue to carry out activities in the area.

Since the discovery of significant gas reserves in the region a decade ago, countries have been engaged in renewed disputes over maritime borders while international law also presents few remedies. The deepening rift between Turkey and Greece has surfaced with Turkey’s decision to enhance energy exploration activities in the Eastern Mediterranean and the deal Ankara made with Libya’s official government.

Egypt and Greece had been in talks for a while after Turkey and Libya on Nov. 27, 2019, signed two separate pacts, one on military cooperation and the other on maritime boundaries of countries in the Eastern Mediterranean.

The agreement between Turkey and Libya determined the sovereignty area based on international law as 186,000 square kilometers (71,815 square miles). Thus, the possibility of establishing an exclusive economic zone (EEZ) agreement between Greece and Egypt, and Greece and the Greek Cyprus administration was eliminated.

The maritime pact asserted Turkey’s rights in the Eastern Mediterranean in the face of unilateral drilling by the Greek Cypriot administration, clarifying that the TRNC also had rights to the resources in the area. The pact took effect on Dec. 8.