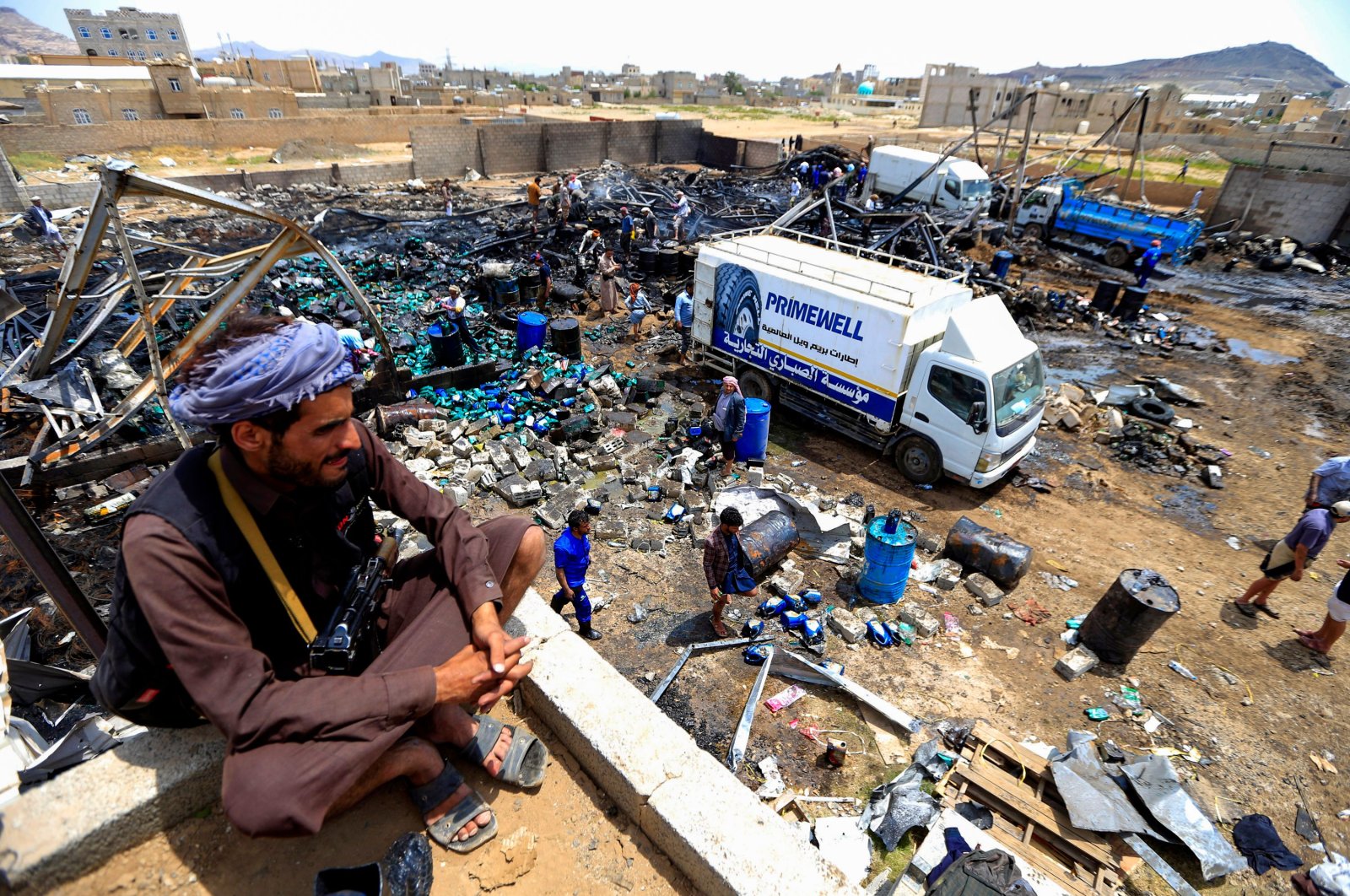 Workers search through debris at a warehouse, after it was reportedly hit in an airstrike by the Saudi-led coalition, in the Yemeni capital Sanaa, July, 2, 2020. (AFP)
by Anadolu Agency Jul 02, 2020 9:50 pm
RECOMMENDED

The U.N. Security Council must remind the United Arab Emirates (UAE) it is bound by international law not to implement "destructive and malicious policies" in the Middle East and North Africa, Turkey told the international body.

Turkey's ambassador to the U.N. Feridun Sinirlioğlu accused the UAE Wednesday of embarking on a campaign to stifle democratic movements in the region, citing Abu Dhabi's "excessive ambition" to dominate the wider region "resulted in nothing but human suffering."

The UAE is a part of a Saudi Arabian-led coalition that launched a devastating air campaign to roll back Houthi territorial gains in 2015, further escalating the crisis in Yemen.

Tens of thousands of Yemenis, including civilians, are believed to have been killed in the conflict that has led to the world's worst humanitarian crisis as millions remain at risk of starvation.

"UAE's actions amounted to war crimes, causing mass civilian casualties and systematic destruction of civilian infrastructure through airstrikes," Sinirlioğlu said in a letter to the Council and Secretary-General Antonio Guterres.

Turning to Libya, which has been torn by civil war since the ouster of late dictator Muammar Gadhafi in 2011, Sinirlioğlu said Abu Dhabi was supporting putschist Gen. Khalifa Haftar and wants to oust the legitimate U.N.-recognized Government of National Accord.

The government was founded in 2015 under a U.N.-led agreement, but efforts for a long-term political settlement failed due to a military offensive by Haftar's forces.

He said the U.N. also recorded systematic violations of an arms embargo by the UAE and deployment of mercenaries from Syria, Sudan, Chad and other nations to Libya.

Abu Dhabi also supports the Bashar Assad regime in Syria in its offensive against democracy, civil movements and civilians, said Sinirlioglu, adding the UAE is offering financial and logistical support to the PKK terror group to carry out attacks in Turkey.

"The UAE's efforts to undermine the U.N.'s efforts and credibility continue unabated," he added.

He said the UAE had failed to create an "axis of unstable and fragile states that it can easily manipulate in the region," which led to the understandable "frustration" of the emirates.

The UAE "must respect the independence, sovereignty, unity and territorial integrity of other states and it must stop instigating instability in the region and beyond," Sinirlioğlu added.