Turkey urges world to back 'right side,' Azerbaijan, in Nagorno-Karabakh conflict 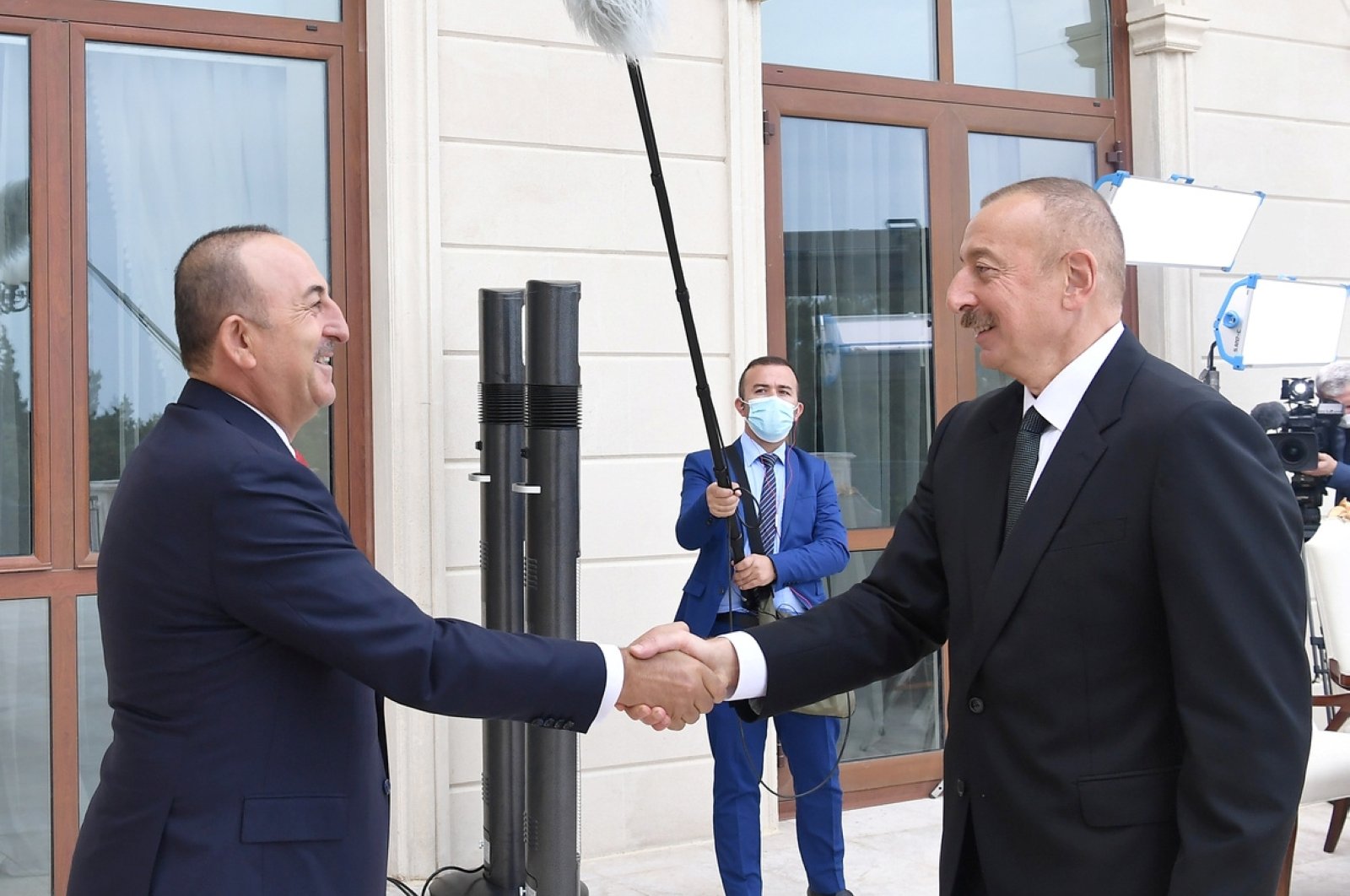 Turkey on Tuesday called on the international community to support Azerbaijan, the "righteous" party in the conflict in occupied Nagorno-Karabakh.

"The world must side with the right one in the Nagorno-Karabakh tension, and the right one is Azerbaijan," Foreign Minister Mevlüt Çavuşoğlu said, during a working visit to Azerbaijan where he met with the country's leader Ilham Aliyev as well as his Azerbaijani counterpart Ceyhun Bayramov.

Following his bilateral meetings with the Azerbaijani authorities, Çavuşoğlu gave a news conference and highlighted Turkey's support for Azerbaijan in its fight against Armenia.

"The international community treats the occupier, Armenia, and the victim, Azerbaijan, the same. This approach does not lead to a solution to the conflict. It can no longer go on like this," he said.

He added that Turkey will continue its fight to show the world the truth and enable the international community to support the right causes, like the cause of Azerbaijan.

Armenia's attacks on civilian settlements in Azerbaijan are not only a "crime against humanity" but also "a sign of the desperation," he also said. Separately, Bayramov also criticized Armenia, saying it has "a terrorist mentality" with no scruples in pursuit of its goals.

Later in the day, Çavuşoğlu gave an interview to Turkey's TRT Haber, accusing Armenia of terrorism.

"Azerbaijan is fighting Armenian terrorism. Armenia acts as if it is a rogue state," he said, adding that although all sides call for negotiation, it will not be possible unless Armenia withdraws from the occupied Azerbaijani territories.

"Turkey would like to participate in any group that is formed to hold peace talks on Nagorno-Karabakh, whether it is the Minsk Group or something else," the foreign minister said.

Regarding a possible solution in the upcoming days to the conflict, Çavuşoğlu emphasized that it will only be possible if Armenia retreats.

"However," he continued, "if a cease-fire takes place in the upcoming days, it would soon be violated once again by Armenia, just like all the other cease-fires before."

The foreign minister also called on Russia to side with Azerbaijan.

"Russia should be the one that contributes the most to the resolution process," Çavuşoğlu said.

Clashes between Armenian and Azerbaijani forces have intensified as Armenian aggression continues.

As soon as the violations began, Ankara reiterated its support for Azerbaijan, with many officials, mainstream parties and the Turkish Foreign Ministry declaring unwavering backing of its brotherly Turkic nation.

Devlet Bahçeli, leader of the Nationalist Movement Party (MHP) said on Tuesday that the Armenian attack on Azerbaijan is tantamount to attacking Turkey.

"The only solution in the southern Caucasus is Armenia's unconditional withdrawal from occupied territories," he stated during his parliamentary group meeting.

Azerbaijan's sovereignty should be affirmed in Nagorno-Karabakh, Bahçeli further asserted. "There is no other remedy, no other choice and no other solution."

"In clashes (with Armenia), the hearts of 83 million (Turkish people) beat with Azerbaijan," Kemal Kılıçdaroğlu, leader of the Republican People's Party (CHP), told his party's parliamentary group in the capital Ankara.

Azerbaijan has the advantage of being justified on the Nagorno-Karabakh issue under international law, Kılıçdaroğlu noted.

"We must back this righteous cause," he said.

Kılıçdaroğlu also called on Armenia to end the occupation in the region.

The Good Party (IP) also raised its voice in support for Azerbaijan.

"The government is taking the right stance on supporting Azerbaijan; we support this stance," Meral Akşener, leader of the IP, told her party's parliamentary group.

However, Akşener urged the government to carry out the right diplomatic strategy with all states involved in the issue.

"This should not be diplomacy with (just) one country but with all countries and institutions that can be part of this issue," Akşener said.

"It is very important to put rationality into action and to take some steps that can yield results," she added.

Akşener added that Turkey's most important asset is Azerbaijan's righteous cause regarding occupied Nagorno-Karabakh.

"If we verify this reality at the right time and place, we can get results," she said.

While Turkey pledges its determined support for Azerbaijan, Armenia fuels the tension in the region by targeting civilians as Azerbaijan's chief prosecutor confirmed in a statement Monday.

Since Sept. 27, Azerbaijan's civilian casualties rose to 27, while 141 have been wounded in Armenian attacks on civilian settlements.

Still, Baku's advancements resumes as the Azerbaijani army on Monday gained control of three more villages in Jabrayil district in Nagorno-Karabakh and some strategic hills in the occupied region.

"The successful operation of our heroic army continues. Karabakh is Azerbaijan," he wrote on Twitter.

The Azerbaijani army on Sunday also liberated the city center of Jabrayil and nine other villages from Armenian occupation.