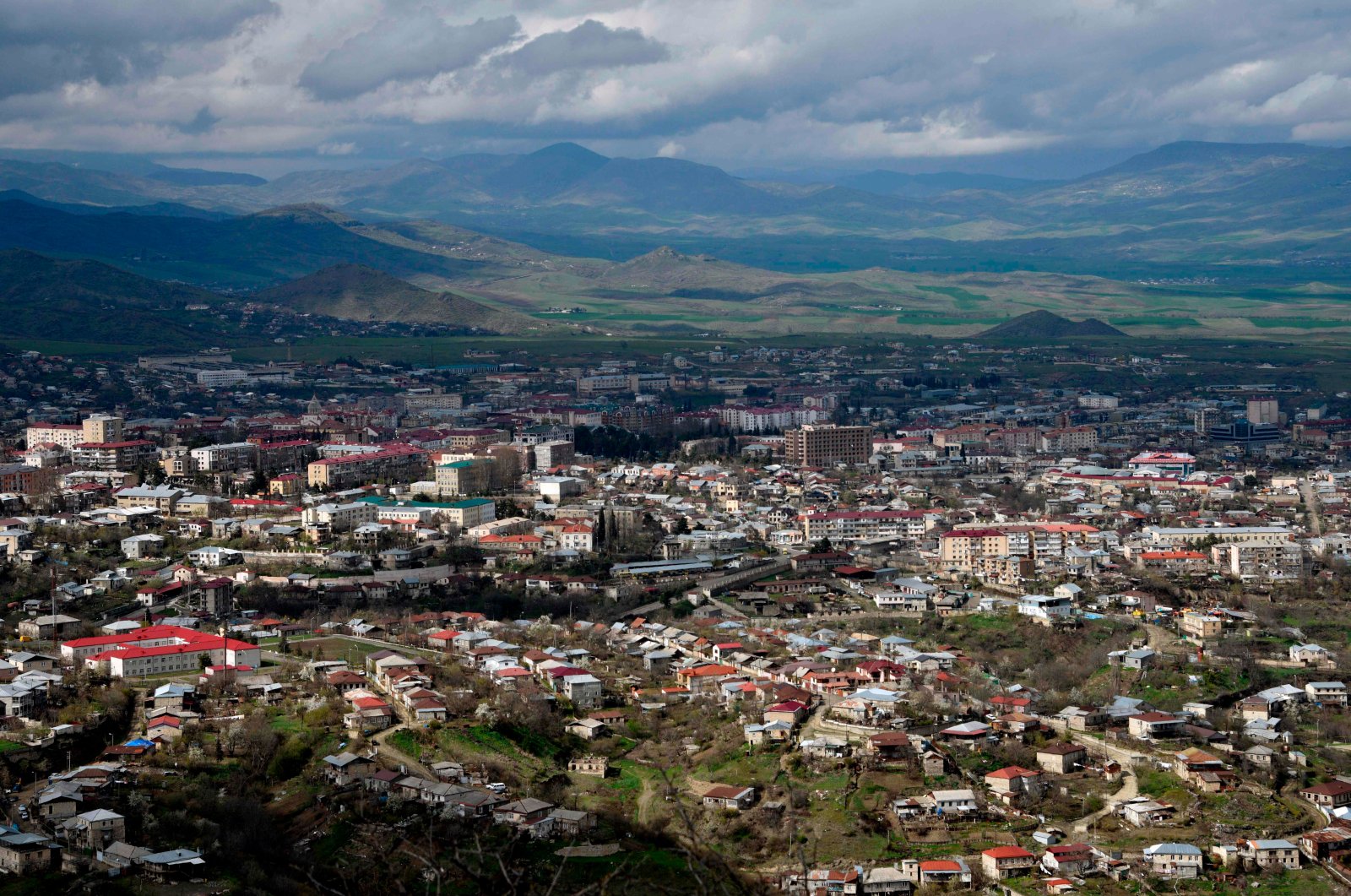 A general view of Stepanakert (Khankendi), the capital of the Armenian-occupied Azerbaijani region of Nagorno-Karabakh, April 4, 2016. (AFP Photo)
by DAILY SABAH WITH AA Jul 13, 2020 12:16 pm

Turkey on Monday warned Armenia to respect the territorial integrity of Azerbaijan, noting that Ankara will stand with Baku “with all it has.”

He called on Armenia to "pull its head together" and said that Turkey stands with Azerbaijan "with all it has."

Referring to Armenian aggression as "unacceptable," Çavuşoğlu said: "The Azerbaijani army has done what was necessary and repelled these attacks.”

Çavuşoğlu's remarks came shortly after four Azerbaijani soldiers were killed in a border clash with Armenian troops on Sunday.

"From this (incident), we see that by creating new conflict areas, Armenia wants to draw attention to other places, especially away from the lands it has occupied," he added.

"Whatever solution Baku prefers for the occupied lands and Karabakh, we will stand by Azerbaijan," he said.

“Azerbaijan is not alone. The Republic of Turkey and the Turkish people are with Azerbaijan with all our capabilities.”

The latest incident began Sunday when Armenian and Azerbaijani troops exchanged fire in the northern section of their border. Officials in both countries blamed each other for starting the fighting and said that sporadic shelling continued Monday.

Azerbaijan's Defense Ministry said the Armenian army had fired on positions held by Azerbaijan in the northwestern Tovuz region, adding that four of its soldiers had been killed in Armenian shelling since Sunday with five Azerbaijani servicemen wounded.

Turkey's Foreign Ministry earlier in the day strongly condemned the attack carried out by Armenian forces. In a statement, the ministry said the fact that Armenia's action, which marked a new manifestation of its aggressive nationalism, was repelled by Azerbaijan in a concrete indication that aggression would not be left unanswered.

The ministry also pointed out that such moves, which Armenia makes to distract the international community's attention from its yearslong illegal occupation of the Azerbaijani region of Nagorno-Karabakh and its surrounding areas and to add new dimensions to the conflict, are doomed to remain inconclusive.

The ministry also called on the Armenian side to give up such "dangerous tactics" and urged it to act with common sense in observing the law.

The ministry also noted that the undertaking of such endeavors exceeded Armenia's capacity showcasing its weakness in reasoning and constituted the biggest obstacle to peace and stability in the region, adding that the international community would not accept Armenia's efforts to cover up its aggression.

"Turkey, with all it possesses, will continue to stand by Azerbaijan in its fight to protect its territorial integrity," the ministry added.

Presidential Spokesperson İbrahim Kalın also condemned the Armenian aggression in a tweet and said that Turkey will always stand with Azerbaijan.

Azerbaijan's President Ilham Aliyev denounced what he described as “another provocation of Armenia” and vowed to protect Azerbaijan's national territory.

Moscow also said further escalation was "unacceptable" as it threatened regional security and expressed readiness to provide any assistance in easing the tensions.

In Moscow, the Russian Foreign Ministry has expressed “serious concern” about the outbreak of fighting and warned against further escalation that could undermine regional security.

"The Russian Foreign Ministry expresses serious concern over the sharp escalation of the situation on the Armenian-Azerbaijani border on July 12..." the statement said, offering condolences to the bereaved.

Russia has maintained close ties with both Armenia and Azerbaijan and has been part of the so-called Minsk group of the Organization for Security and Cooperation (OSCE) in Europe alongside the U.S. and France, which has tried to mediate a settlement of the Karabakh conflict. Russia also maintains a sizable base in Armenia and provides border security with Turkey.

Toivo Klaar, the European Union's special representative for the South Caucasus, voiced concern about the exchange of fire on the Armenia-Azerbaijan border, tweeting that it's “important for both countries to show restraint and to use all channels of communication, both direct and the good offices of the OSCE Minsk Group Co-Chairs."

Çavuşoğlu also touched upon criticism regarding the reversion of Hagia Sophia into a mosque, saying that the decision was lawfully made.

"People may express their opinion on the matter and we respect their opinions even if we do not endorse it, but we strongly reject statements that interfere in Turkey's right of sovereignty," Çavuşoğlu said.

He continued by criticizing Greece, noting that it does not respect religious freedoms and is the only country to have capital without a mosque.

"Greece is the last country to have a say on these issues. We know how badly they treat Turks in Western Thrace and the mosques in the country," the minister said.

Greek officials criticized the recent decision to revert Hagia Sophia into a mosque, while Turkish officials say Turkey respects and preserves cultural and religious monuments. Turkish officials also note that Ottoman monuments in Greece are being misused in a significant blow to the country's historical heritage and the cultural heritage of its Turkish minority.

Moreover, dozens of mosques were closed to worship, while others were converted into churches. Many buildings abandoned since have fallen into ruin.

Çavuşoğlu also said 80% of regional problems would be solved if Greece gave up its maximalist ambitions in the Eastern Mediterranean.

Touching upon the issue of the Libyan crisis, Çavuşoğlu said putschist Gen. Khalifa Haftar is not sincere in his remarks on a cease-fire.

"We believe he is trying to buy time by suggesting such moves. The GNA (Government of National Accord) is right to be suspicious of Haftar's sincerity," Çavuşoğlu said, adding that Turkey is in favor of a political solution to the conflict, but necessary conditions must be met to establish a political solution.