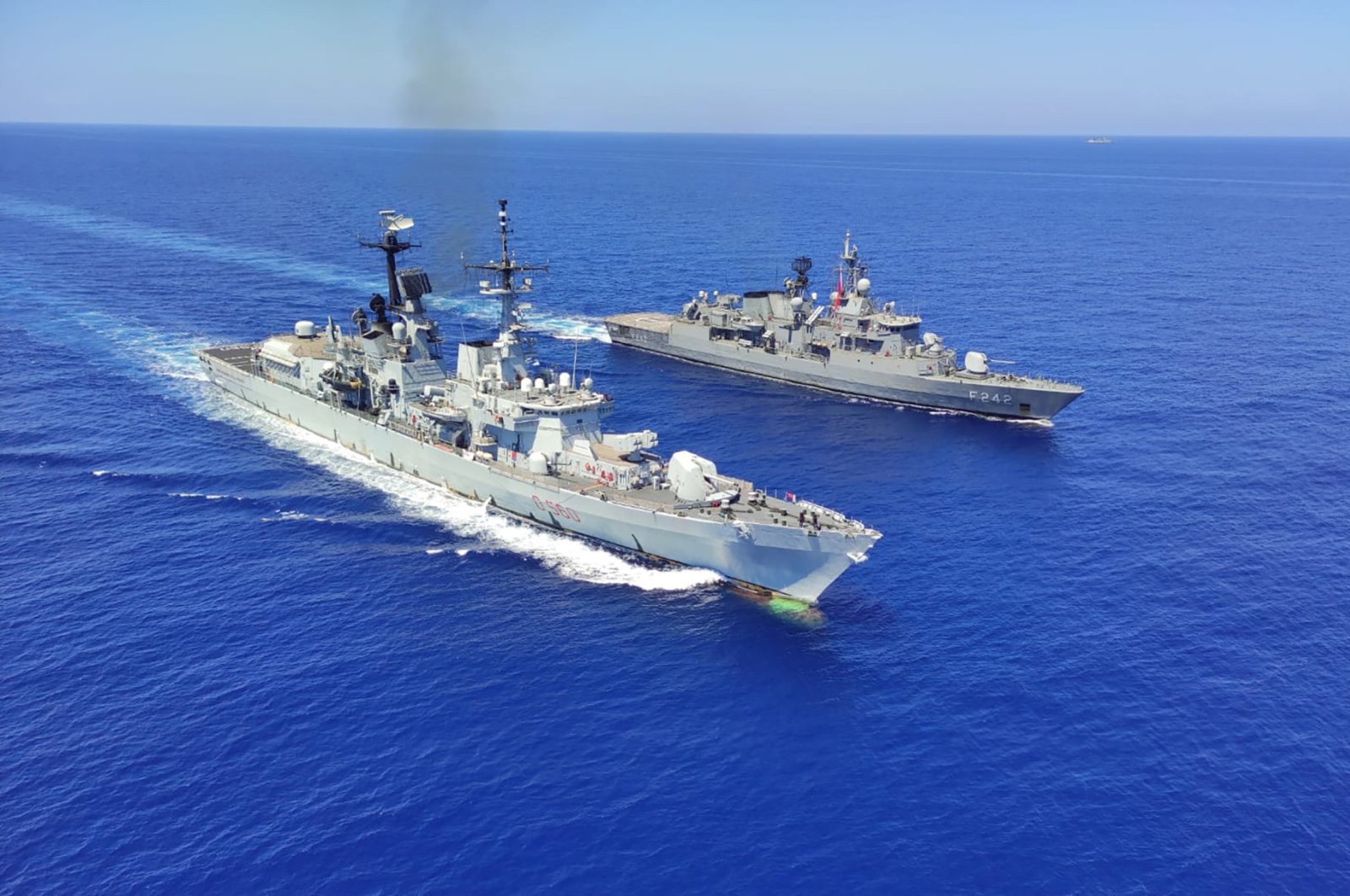 Turkey has pointed to aggressive actions mounted by Greece in the Eastern Mediterranean, particularly the country's attempt to double its territorial waters in the Ionian Sea from 6 to 12 nautical miles, warning that such steps would be considered a "cause for war."

"They cannot extend their territory by 12 miles. The decision taken by our Assembly years ago is valid. This could cause a war," Turkish Foreign Minister Mevlüt Çavuşoğlu told news channel A Haber Saturday.

In the future, Greece could also extend its territorial waters in other maritime areas, the Greek prime minister added.

Later Sunday, Çavuşoğlu and European Union Minister for Foreign Affairs Josep Borrell discussed the situation in the Eastern Mediterranean in a phone call.

Turkey – the country with the longest coastline in the Mediterranean – has sent out drillships to explore energy reserves on its continental shelf.

The country has been firm in declaring that Ankara and the Turkish Republic of Northern Cyprus (TRNC) have rights in the region. Ankara earlier said energy resources near the island of Cyprus must be shared fairly between the Greek Cypriot administration and the TRNC – which has issued Ankara's state oil company Turkish Petroleum (TPAO) with a license for exploration.

Both countries have called on their allies for support, urging the international community to mediate between them. On Wednesday, Greece, along with France, Italy and the Greek Cypriot administration, launched a three-day joint military exercise in the area south of Crete, while Turkey conducted drills with the U.S. Navy nearby.

The Turkish Defense Ministry also conducted its own drills with an Italian navy vessel on Tuesday. The same U.S. destroyer that took part in the exercises with Turkey staged air and sea maneuvers with the Greek navy south of Crete Monday.

However, while many allies seek a balance between Turkey and Greece, France's bold support for Athens has been met with strong reactions in Ankara.

Touching on France's support of Greece in the Eastern Mediterranean, Çavuşoğlu said France was pushing for European leadership. "France wants to create a security force in the European Union against NATO. NATO is one of the goals of the current escalation," he expressed.

Greece previously made agreements with Egypt, Israel and the Greek Cypriot administration. They are political moves against Turkey but not feasible, he noted on the recent Greece-Egypt maritime deal.

"This is our continental shelf and the approval of both states (Greece-Egypt) to the agreement would not change much for us," he added.

Early on Saturday, Turkey's Vice President Fuat Oktay urged the European Union to adopt a fair and just stance regarding the dispute between Turkey and Greece.

In an exclusive interview with Anadolu Agency (AA), Oktay said: "Turkey expects the EU to deliver a just stance: No one should expect Ankara to take one step back in terms of its rights."

Oktay also asked: "If Greece's attempts to expand its territorial waters isn't a cause for war, then what is?" He emphasized that the country "will protect its rights regarding every cubic meter of the Eastern Mediterranean no matter what."

"It is insincere for the EU to call for dialogue on the one hand and make other plans on the other regarding the activities we carry out in our own continental shelf in the Eastern Mediterranean," Oktay also said on his Twitter account.

"We (Turkey) are well aware of the language of peace and diplomacy, but we will not hesitate to do what is necessary when it comes to protecting the rights and interests of Turkey. France and Greece are among those who know this best," he added.

The EU is considering applying new sanctions on Turkey in response to its search for gas in the Eastern Mediterranean but wants to give diplomacy a chance first, bloc officials said Friday.

Maas, on the other hand, said the new sanctions must be discussed at the EU summit in September while highlighting that constructive dialogue would be the "only way out" from the crises in the disputed region. He also underlined that the ties with Turkey were "more than strained" due to the problems in the region. The EU has already slapped sanctions on companies involved in the drilling, and Turkey's process to join the bloc's ranks is effectively on ice.

In its latest move, the Turkish navy late Friday issued a new advisory, known as a Navtex, saying it would hold shooting exercises in the Eastern Mediterranean south of the town of Anamur in Mersin province.

According to the notice, the drill will be held between Aug. 29 and Sept. 11. Anamur is located 73 kilometers (45 miles) north of the coast of the TRNC.

Navtex or navigational telex is a maritime communications system that allows ships to inform other vessels about their presence in an area, as well as other information.

On Thursday, Turkey issued Navtex notices for a gunnery exercise in the Eastern Mediterranean for Sept. 1-2 and to extend the energy exploration activities of the Oruç Reis seismic research vessel and accompanying Cengiz Han and Ataman ships in the region until Sept. 1.

According to the ministry, Greek fighters took off from Crete and approached the region where the Navtex was declared. On Aug. 27, the Turkish Air Forces’ radar systems detected six F-16 jets taking off from the island heading for Southern Cyprus, the ministry said in a statement.

Turkish F-16 jets intercepted fighters approaching the area where Turkey issued a Navtex alert in the island of Cyprus’s southwest and warded them off after finding out that the jets belonged to Greece, it added.

Turkish naval and air forces, the ministry added, would resolutely continue to protect Turkey’s rights and interests in the Eastern Mediterranean.