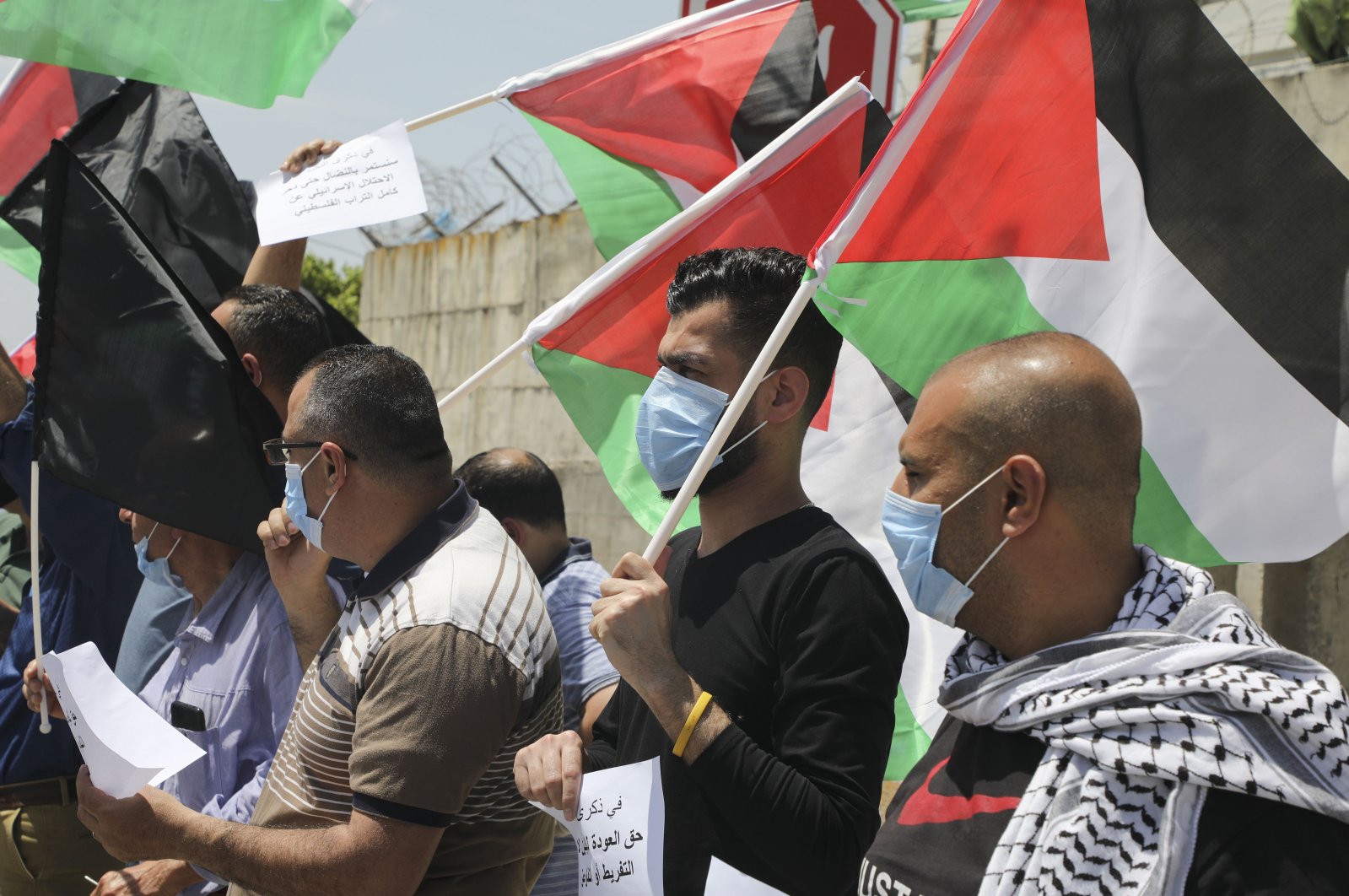 Mask-clad Palestinians demonstrate along the controversial separation barrier at the western entrance of the northern West Bank city of Tulkarem, May 16, 2020. (AFP)
by DAILY SABAH May 21, 2020 11:35 am
RECOMMENDED

President Recep Tayyip Erdoğan spoke over the phone with his Palestinian counterpart, Mahmoud Abbas, on Wednesday, ensuring him of Turkey's solidarity with the Palestinian cause.

Focusing on the Turkish-Palestinian ties and regional developments, during the conversation Erdoğan reportedly told Abbas that Turkey will continue to support Palestine in every aspect.

On Wednesday, an accord signed between Turkey and Palestine on May 30, 2018 that is "automatically renewed for a year on each occasion" was published in the Official Gazette.

Turkey is to "provide medical specialization training to a maximum of five Palestinian medical doctors every year in Turkey after placement by the OSYM (Student Selection and Placement Center)," according to the accord.

"This protocol also aims to establish the 'Palestine-Turkish Friendship Hospital in Gaza' ... with a capacity of 180 beds in Gaza ... in order to provide health care services to residents of the entire State of Palestine to jointly operate the hospital for three years," it added.

The move came following Turkey's medical aid to the country to tackle the coronavirus.

"We reject Israel's plan to annex the West Bank and call for the world to take a stand against it. Occupation and annexation is a crime," Turkey's Presidential Spokesperson Ibrahim Kalın said on Twitter.

Kalın said Turkey will support all steps to be taken against the occupation and annexation of Palestinian land.

Israel is expected to carry out the annexation on July 1 as agreed between Prime Minister Benjamin Netanyahu and Benny Gantz, the head of the Blue and White party.

The plan comes as part of U.S. President Donald Trump's so-called "deal of the century" that was announced on Jan. 28. It refers to Jerusalem as "Israel's undivided capital" and recognizes Israeli sovereignty over large parts of the West Bank.

Netanyahu on Sunday presented his unity government to the Knesset, or Israel's parliament, ending more than a year of political deadlock. Last month, he and rival-turned-partner Gantz announced they would be setting aside their differences and forming a unity government.

Under the deal, Gantz would take over as prime minister after Netanyahu on Nov. 17, 2021.