Turkey will not forsake rights in seas or make concessions, Erdoğan says 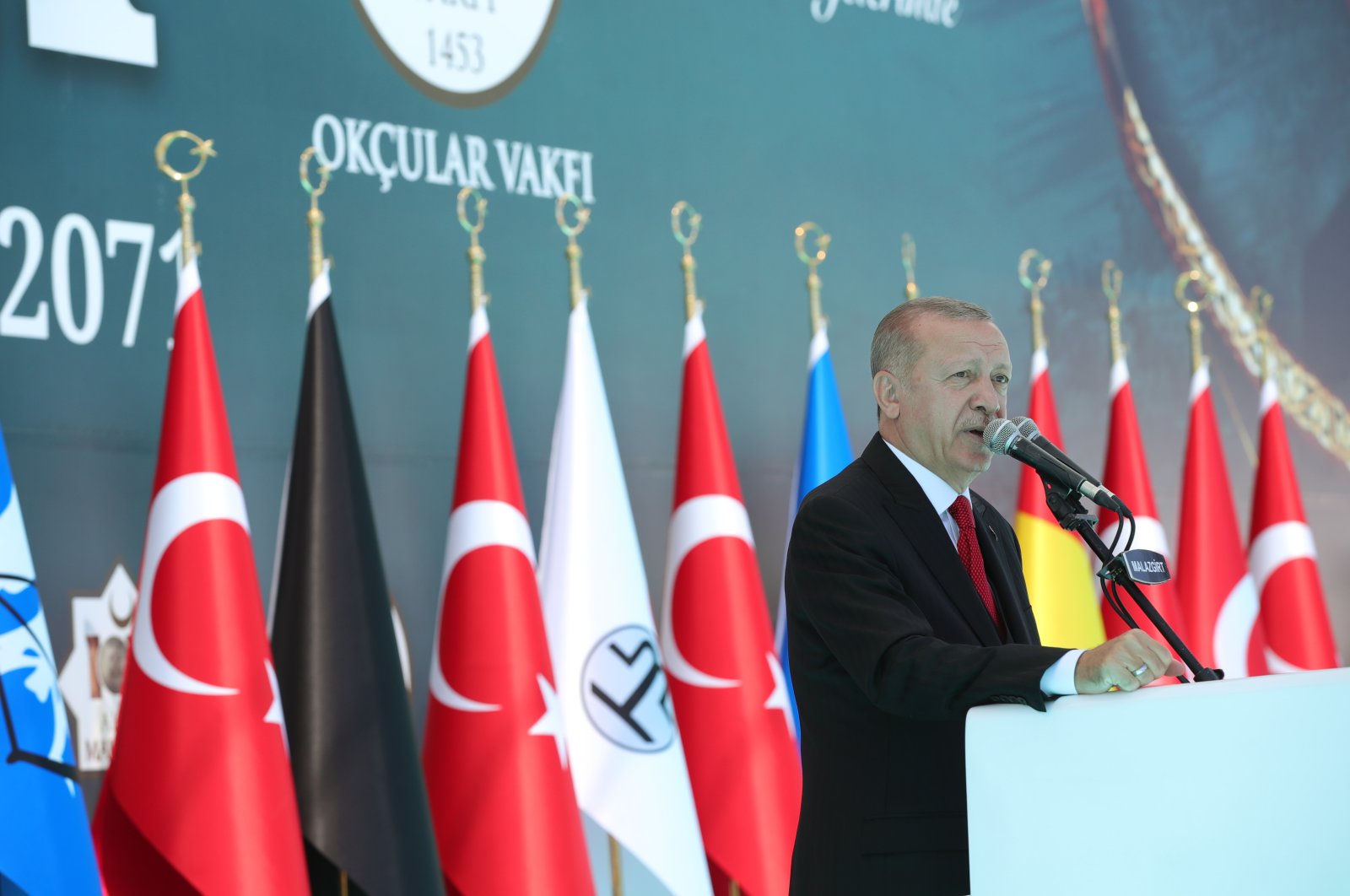 President Recep Tayyip Erdoğan speaks at the 949th anniversary of the Victory of Manzikert in the Ahlat district of eastern Bitlis province, Turkey, Aug. 26, 2020. (AA Photo)
by DAILY SABAH Aug 26, 2020 11:52 am
Edited By Nurbanu Tanrıkulu Kızıl

President Erdoğan urged Greece to refrain from provocations in the Eastern Mediterranean, warning that their insistence may lead to their "ruin" as Turkey will not give up its rights in the region

President Recep Tayyip Erdoğan reiterated Turkey's determination to protect its rights in the Eastern Mediterranean, the Aegean and the Black Sea, saying that Ankara will not make any concessions as he criticized Greece for its policies.

The two neighbors are in a bitter spat over determining maritime boundaries and offshore energy rights in the Mediterranean and have sent warships. Greece also recently military drills in an area between the islands of Crete and Cyprus where Turkey's seismic research vessel Oruç Reis is conducting work.

"We will take whatever we are entitled to in the Mediterranean, Aegean and Black seas, we will not make any concessions," Erdoğan said Wednesday in eastern Muş province at a commemoration ceremony of the Seljuks' Manzikert (Malazgirt) Victory over the Byzantines in 1071.

The president noted that the same way Turkey does not set its eyes on other countries’ territory, sovereignty, or interests, it expects others to do the same for Turkey.

“We are determined to do whatever is politically, economically and militarily necessary to ensure this,” Erdoğan said, adding that all countries need to realize that Turkey is no longer a country whose patience, determination, courage and opportunities can be tested.

"If it (Greece) wants to pay a price, let them come and face us. If they don't have the courage for it, they should stand out of our way," Erdoğan said, as he referred to Greece as being "unworthy of the Byzantine legacy" and hiding behind the European Union in its pursuit of piracy and unlawfulness.

Erdoğan continued by saying that Greece refuses to take lessons from history and acts like a fake bully in the Mediterranean, as he warned Athens to avoid taking steps that could lead to its "ruin."

“We urge our counterparts to pull their socks up and refrain from making mistakes which would lead to their ruin,” Erdoğan said.

Highlighting that the region has withstood provocations and other attacks that pose a threat to the sense of fraternity, solidarity and fondness, Erdoğan said ongoing plans to ruin peace will backfire.

“All of our success in politics, the economy and military fields help us to look to our future with more confidence, as the natural gas reserve we discovered in the Black Sea has boosted our morale after a long time,” Erdoğan said, adding that the revenue from the Black Sea gas will be utilized to improve the lives of all citizens in the country.

Earlier in August, Turkey’s Oruç Reis research ship escorted by warships started surveying for oil and gas in the area after Greece announced a maritime deal with Egypt.

Greece has around 6,000 islands and smaller islets in the Aegean and Ionian Seas, more than 200 of them are inhabited. On the other hand, Turkey has the longest coastline in the Mediterranean.

Turkish drilling procedures in the Eastern Mediterranean fall under two categories: licensed areas issued by the Turkish Republic of Northern Cyprus (TRNC) to Turkey and the licensed areas that are issued by Turkey to the TPAO – Turkey's national oil company.

The country has so far completed six drilling studies in the Eastern Mediterranean, while the drilling vessel Yavuz is conducting a seventh in the Selçuklu-1 zone to the west of the island of Cyprus.

Turkey's third drillship, Kanuni, arrived in Taşucu, Mersin, a coastal city in the Mediterranean region of the country, on March 15.

Following the completion of renewal and upgrade studies, Kanuni, which joined the fleet at the beginning of 2020, is also projected to start operations in the Mediterranean Sea this year.