Turkey will not relinquish its rights in Aegean Sea: Erdoğan 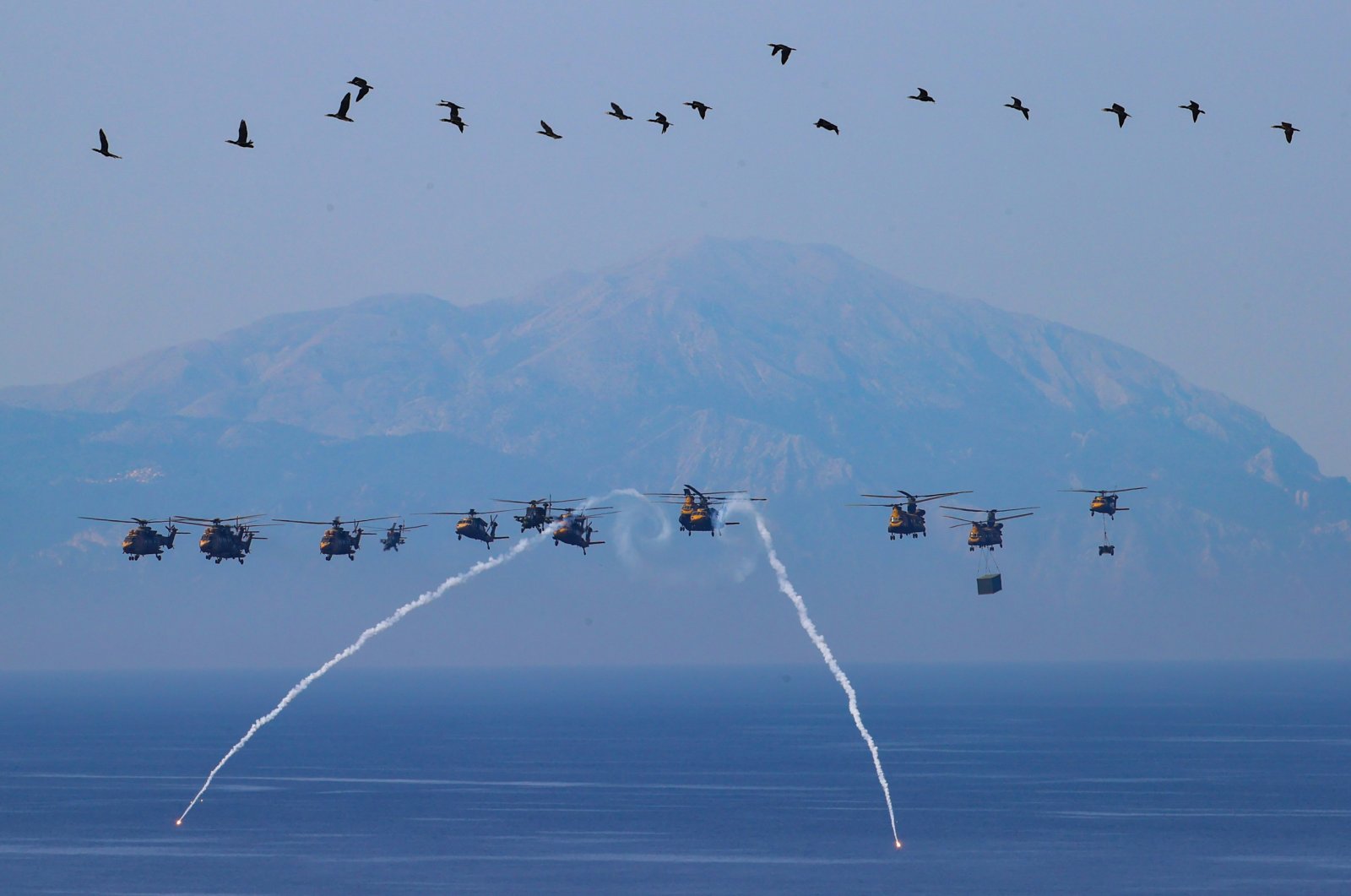 Turkey will not relinquish its rights in the Aegean Sea and will not hesitate to use its powers stemming from international agreements, President Recep Tayyip Erdoğan said Thursday as he attended the Efes-2022 military exercise held on Aegean coasts.

Greece should stop arming the islands with nonmilitary status and abide by the international agreements, he said on a resurgence in long-running tensions between the Aegean Sea neighbors.

"I warn Greece to avoid dreams, acts and statements that will result in regret. Come to your senses," he said in a televised speech as he observed the Turkish military exercises on the coast of western Izmir province.

"Turkey will not renounce its rights in the Aegean and will not back down from using rights that are established by international agreements when it comes to arming islands."

Greece is acting as if it is making touristic landings on Aegean islands, he said and added addressing Greek Prime Minister Kyriakos Mitsotakis: "You can't get anywhere with this."

"Some Greek politicians are trying to remain relevant with words and actions that are far from reality, contrary to logic and law," Erdoğan said.

"Turkey does not violate anyone's rights and laws but it does not allow the violation of its own rights and laws either," he stressed and added: "I’m not joking, I’m speaking seriously. This nation is determined.”

Erdoğan also noted that his country would continue hydrocarbon resources exploration in the Black Sea and the Eastern Mediterranean, citing international law.

Greece is violating treaties by arming islands in the Aegean, Foreign Minister Mevlüt Çavuşoğlu also said Tuesday, warning that the sovereignty of those islands will be questioned if it fails to demilitarize them.

Greece has been building a military presence on the Aegean islands in violation of the 1923 Treaty of Lausanne and the 1947 Paris Treaty, he said adding that the islands were ceded to Greece on condition that they are kept demilitarized.

“The agreements are there but Greece is violating them. It’s arming them. If Greece does not stop this violation, the sovereignty of the islands will be brought up for discussion,” he said. “It’s that clear. You will abide by the agreements.”

Turkey in recent months has stepped up criticism of Greece stationing troops on islands in the eastern Aegean, near the Turkish coast and in many cases visible from shore. These islands were required to be demilitarized under the 1923 Treaty of Lausanne and the 1947 Treaty of Paris, so any troops or weapons on the islands are strictly forbidden.

Also, Turkey and Greece have traded accusations of airspace violations in recent weeks. Turkey is demanding that Greece demilitarize its eastern islands, maintaining the action is required under 20th-century treaties that ceded sovereignty of the islands to Greece. Turkish authorities say the Greeks have stationed troops on Aegean islands in violation of the peace treaties that followed World War I and World War II.

Greece continues to militarize islands in the eastern Aegean, in violation of both the 1923 Treaty of Lausanne and the Paris Treaty of 1947. Despite international agreements and treaties, Greece remains adamant about stationing its armed forces on eastern Aegean islands, especially the Dodecanese islands and small nearby islets, including islands and islets very close to Turkey's western coast, many within sight of the shore.

Greece has been putting its armed forces on Aegean islands since the early 1960s notwithstanding numerous objections by Turkey and its obligations under international agreements. Turkey has been reiterating its objections in this regard by making the case to various international organizations and institutions that they should take steps on the issue and halt Greece's actions along these lines. Athens counters that the troops are stationed in response to the presence of Turkish military units, aircraft and landing craft on the opposite coast.

Last year, after a five-year hiatus, the two NATO members resumed talks to address their differences over a range of bilateral issues such as mineral exploration in the Eastern Mediterranean and rival claims in the Aegean Sea. The talks have made little progress and the countries have frequently traded barbs.

Turkey and Greece are at odds over a number of issues, including competing claims over jurisdiction in the Eastern Mediterranean, overlapping claims over their continental shelves, maritime boundaries, air space, energy, the ethnically split island of Cyprus, the status of the islands in the Aegean Sea and migrants.

Tensions flared again last week when Erdoğan said Greek Prime Minister Mitsotakis "no longer exists" for him, accusing him of trying to block sales of F-16 fighter jets to Turkey during a visit to the United States.

Mitsotakis had told reporters after a European Union summit that he had briefed his EU counterparts over Turkey's "aggressiveness" and "provocations which cannot be tolerated by Greece or the European Union."

The activities on the last day of the military exercise, which was held in the Doğanbey Shooting Exercise Area in the Seferihisar district, were also observed by the Defense Minister Hulusi Akar, as well as the defense ministers and chiefs of general staff of more than 10 countries, and the Turkish Armed Forces (TSK) command level.

The Efes-2022 exercise was carried out with the participation of approximately 11,000 personnel, 1100 of whom are foreign, with troops and elements deployed from 37 friendly and allied countries.

The generic scenario of the United Nations Peace Support Operation was used in the exercise, which aims to develop the military capabilities of the joint headquarters and units formed with the elements of the participating countries in the combined and joint operation, in a way to cover all the tasks to be given and to maintain the level of combat readiness.