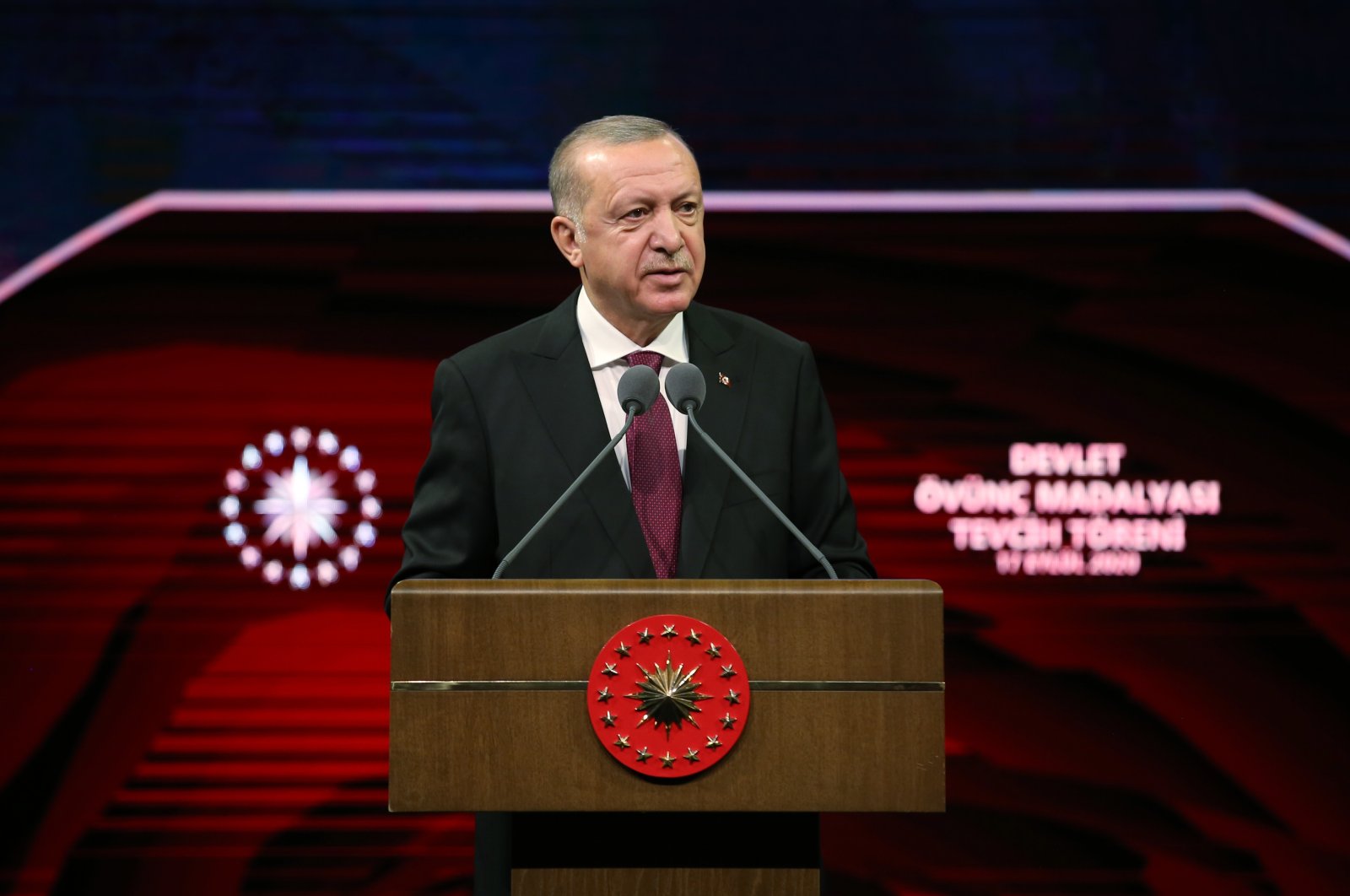 Greece finally decided to sit down at the negotiating table after seeing Turkey’s determination and firm stance in the face of blackmail and threats, President Recep Tayyip Erdoğan said Thursday.

Speaking at an awards ceremony in the capital Ankara, Erdoğan said Greece has realized that the language of threats has not worked in the Eastern Mediterranean and that Turkey would not bow down to banditry or blackmail.

Noting that Ankara has supported dialogue and negotiation since the beginning, Erdoğan said that Turkey has always acted with the dignity of a large state despite the other side’s provocative and childish behavior.

Erdoğan's remarks came after Turkish and Greek military delegations on Thursday continued diplomatic talks to ease the tensions in the Eastern Mediterranean.

The fourth session of technical meetings between Turkish and Greek military delegations to discuss ways to reduce the risk of a clash between two countries was held at the NATO headquarters in Brussels, the Turkish Defense Ministry said.

The technical talks were planned after a meeting between President Erdoğan and NATO Secretary-General Jens Stoltenberg earlier this month.

The third meeting was held Tuesday, following an initial meeting on Sept. 10.

After Thursday's meeting, the Defense Ministry made another statement and said the fifth round of technical talks would be held next week.

Foreign Minister Mevlüt Çavuşoğlu also said late Wednesday that more moderate messages have started to come from Greece on the issue of the Eastern Mediterranean, but Athens has not abandoned its maximalist policies.

"The messages coming from the Greek prime minister in the past two to three days have been more moderate. More moderate messages have started to come in recent days. Greece started to give a more positive message, taking the opportunity of the return of the (Turkish seismic exploration vessel) Oruç Reis to Antalya Port to replenish supplies and for maintenance," he said.

"On the other hand, saying 'we want more of this,' they maintain their maximalist attitude," he added.

Noting that the exploratory talks that started after the 1996 Kardak (Imia) crisis are a mechanism established to decide how to resolve problems that cannot be solved with agreements, Çavuşoğlu underlined that not only one issue but all issues should be discussed in one package.

The Kardak crisis arose when a Turkish ship named Figen Atak ran aground at one of the twin islets, sparking a military dispute between Turkish and Greek forces and leading to a crisis that brought the two countries to the brink of war. Later on, after a phone call from then-U.S. President Bill Clinton and the efforts of then-NATO Secretary-General Javier Solana, tensions de-escalated and the crisis ended.

Çavuşoğlu emphasized that the Oruç Reis returned to the port due to routine periodic maintenance and does not indicate a concession.

"Instead of expecting more from us, Greece can turn this period into an opportunity by taking positive steps. We say that Greece should not miss this opportunity, which it did by signing an agreement with Egypt before," he added.

Çavuşoğlu reiterated that Turkey retains an inherent right in the areas where the Oruç Reis is conducting seismic research.

Touching on the Seville map, which is used by Greece to isolate Turkey by trying to confine it to its Mediterranean coast, the minister said: "Primarily, Greece should announce that it does not accept this map. As long as this map remains, it is impossible to solve problems."

The map, prepared by professor Juan Luis Suarez de Vivero of the University of Seville in southern Spain in 2004, suggests that the boundaries that Greece claims in the Aegean and Mediterranean seas as its continental shelf and the exclusive economic zone (EEZ) declared by the Greek Cypriots in 2004 indicate the official borders of the European Union.

This map claims that the Greek continental shelf starts from the island of Kastellorizo (Megisti-Meis) and goes south to the middle of the Mediterranean Sea, which gives Turkey no territory beyond the Gulf of Antalya in southern Turkey.

Çavuşoğlu went on to say that Germany's stance on the Eastern Mediterranean issue is more objective and constructive, adding, however, that "France wants to sell weapons by increasing tensions."

He said Greece has been arming the islands with a nonmilitary status in the Aegean Sea since 1960 and underlined that Athens now accepted the armament of islands which it had always denied before 1974.

"We told Egypt's charge d'affaires that we could reach a (jurisdiction) agreement with them just like we did with Libya," he said.

Çavuşoğlu noted that Egypt did not violate the Turkish continental shelf while making an agreement with Greece and the Greek Cypriot administration.

He added that there have been meetings regarding the intelligence levels between the two countries.

The relations between Turkey and Egypt deteriorated after Abdel-Fattah el-Sissi toppled the country’s first democratically elected president, Mohammed Morsi, in a coup after only a year in office.

In another diplomatic initiative, Erdoğan spoke with German Chancellor Angela Merkel Wednesday over the phone, urging for dialogue to come up with a solution for tension in the Eastern Mediterranean.

According to a statement by the Turkish Presidency, Erdoğan stressed that disagreements over the Eastern Mediterranean could be resolved through negotiations and settlements, provided that a constructive approach, based on fairness, prevails.

Noting that European states ought to adopt a fair and consistent position on the issue, Erdoğan also said that he will decisively continue to pursue Turkey's rights with an active policy.

Germany has tried to mediate between Ankara and Athens in recent months, however, the attempts ended with Greece's move in August to sign a maritime delimitation agreement with Egypt, which Turkey says violates its continental shelf and maritime rights as well as Libya's, only exacerbating tensions between the two neighbors.

EP in full solidarity with Greece

Meanwhile, members of the European Parliament condemned Turkey for actions in the Eastern Mediterranean, as they expressed full solidarity with Greece and the Greek Cypriot administration on Thursday.

The MEPs adopted a resolution by 601 votes in favor, 57 against and 36 abstentions to express “full solidarity” with Greece and Greek Cyprus.

They called on Turkey to immediately halt exploration and drilling activities in the Eastern Mediterranean and stop “nationalistic warmongering rhetoric.”

They continued by noting that a solution can only be found through dialogue, diplomacy and negotiations as they urged all actors to commit to an urgent de-escalation.

The statement comes ahead of the Special European Council meeting on Sept. 24-25.