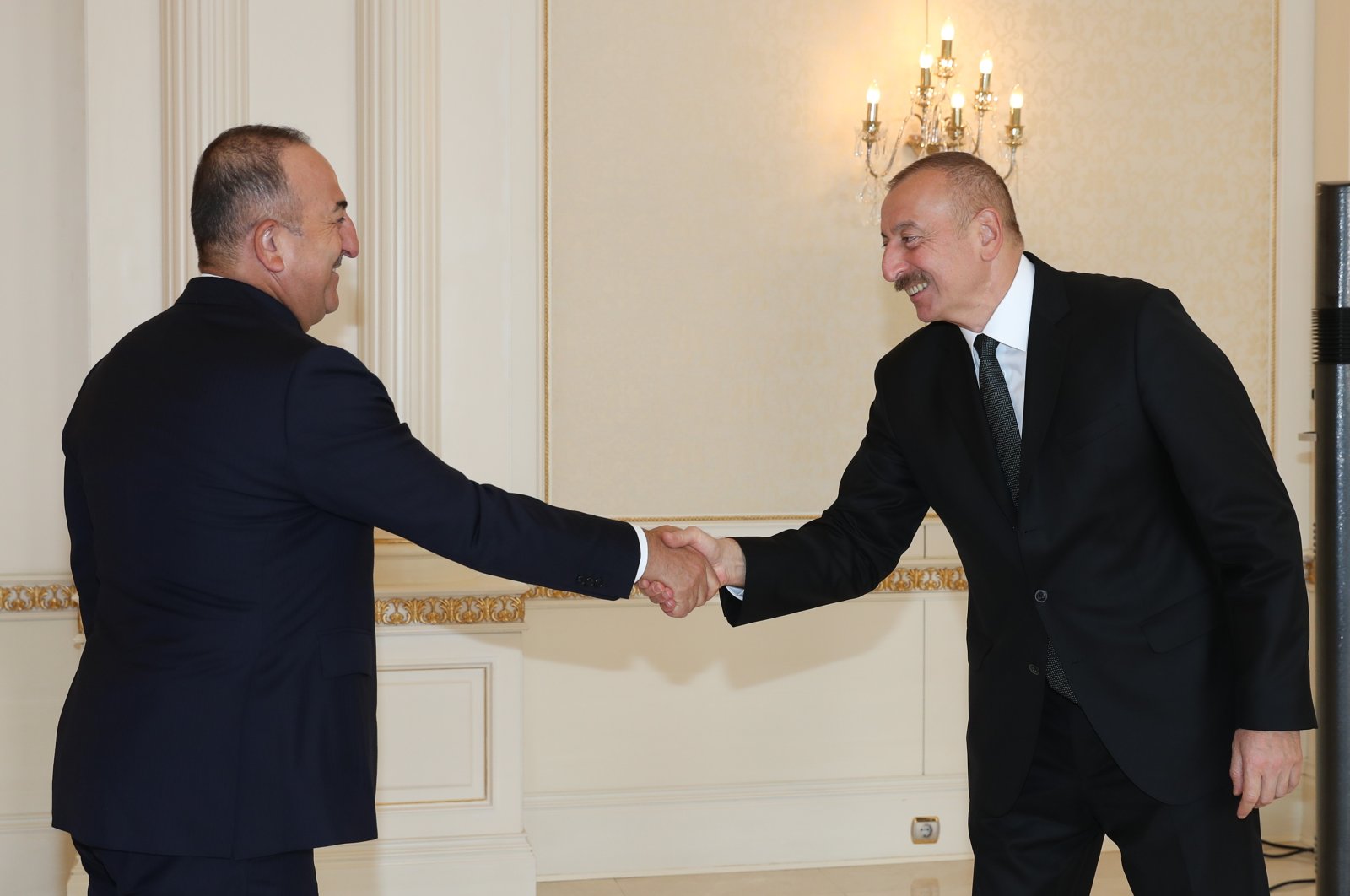 Turkish Foreign Minister Mevlüt Çavuşoğlu visited Azerbaijan on Sunday to discuss recent developments in the Armenian-occupied Nagorno-Karabakh region, where clashes between Baku and Yerevan erupted a month ago.

"We are once again in Baku with our brothers to renew our strong support for dear Azerbaijan and exchange (information) on the latest developments in Nagorno-Karabakh," Çavuşoğlu said on Twitter.

The top diplomat met with Azerbaijan's President Ilham Aliyev as well as his Azerbaijani counterpart.

During the meeting with Çavuşoğlu, Aliyev said that Armenian Prime Minister Nikol Pashinian is responsible for the continuation of the war in Nagorno-Karabakh and for the deaths on the two sides.

Noting that Pashinian asked Russian President Vladimir Putin for help in a letter, Aliyev stated that while the letter had demonstrated that Armenia accepted its defeat, it also showed Yerevan will not give up.

The president thanked Turkey and the Turkish press for their support and for risking their lives to tell the world what happened in the region. Noting that it was the Turkish press that arrived first after Armenia bombed the Azerbaijani cities of Ganja and Barda, Aliyev pointed out that this reflected the unity of both countries.

Çavuşoğlu for his part, stated that the Turkish people urge authorities to increase support to Azerbaijan.

“Everyone sees what Armenia is doing and that it violates cease-fires every time; however, there are many that do not state this openly. Therefore, we will continue to defend our rights in strengthening our solidarity,” Çavuşoğlu said.

Moscow's defense pact with Armenia does not extend to Nagorno-Karabakh, and Russia said Saturday that "necessary" help would be provided if the fighting reaches Armenian territory.

“Permanent peace will be established when Armenia withdraws from Azerbaijani territory it has occupied for 30 years and sends back terrorists and mercenaries,” the Turkish Defense Ministry stated on Sunday during a briefing, adding that 91 civilians have lost their lives while 400 were injured in Armenian attacks to date. Relations between the two former Soviet republics have been tense since 1991 when the Armenian military occupied Nagorno-Karabakh.

The ministry added in a tweet on the same day that as a result of successful operations, the Azerbaijani army liberated 193 settlements.

World powers including Russia, France and the United States have called for a sustainable cease-fire. Turkey, meanwhile, has supported Baku's right to self-defense and demanded the withdrawal of Armenia's occupying forces.