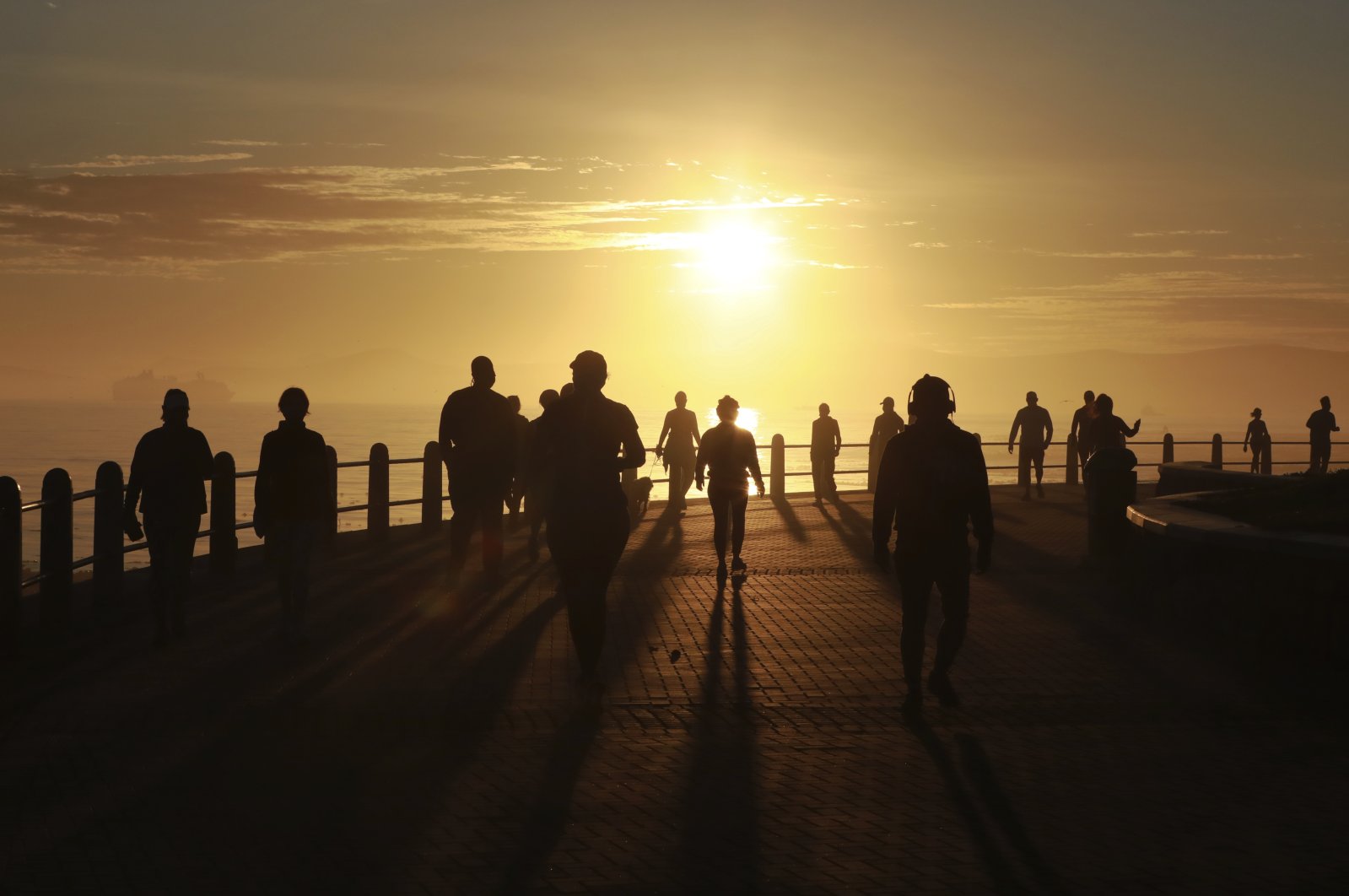 In this file photo taken Monday May 18, 2020, people exercise along the promenade at sunrise in Sea Point, Cape Town, South Africa, as the country marked day 53 of a strict government lockdown in a bid to prevent the spread of coronavirus. (AP Photo)
by Anadolu Agency May 25, 2020 9:21 am
Edited By Nurbanu Tanrıkulu Kızıl
RECOMMENDED

Solidarity with Africa is more essential than ever as the world struggles with the coronavirus, Turkey's foreign minister said Monday while marking Africa Day, the anniversary of the foundation of the African Union.

"The unprecedented conditions caused by the COVID-19 pandemic all over the world render the solidarity symbolized by Africa Day even more significant this year," Mevlüt Çavuşoğlu said in a statement.

"The progress achieved in recent years by Africa in many fields and our developing partnership with the continent enable us to look to the future with hope, despite existing severe challenges," Çavuşoğlu said.

"Together with our public institutions, nongovernmental organizations and private sector, we have given priorities to developing our cooperation with the African continent," he added.

Africa Day is the annual commemoration of May 25, 1963, the day the African Union was founded.

Turkey aims to "further strengthen our relations with Africa on the basis of a win-win understanding and mutual respect," he said.

"Our bilateral trade volume has soared sixfold in the last 18 years," he noted.

"Turkey's interest in Africa and the Turkish people's feelings of friendship toward the African continent, with which Turkey has historical and human ties, are not new," said Çavuşoğlu.

"With our country becoming a strategic partner of the African Union and with the first Africa-Turkey Partnership Summit 2008 held in Istanbul, Turkey and the African countries have clearly set forth their mutual will to step up their relationship to a more advanced stage," he said.

"In October 2020, we are also planning to hold the third Turkey-Africa Economy and Business Forum, which we held in Istanbul in 2016 and 2018 and achieved successful results," he added.

On the coronavirus, Çavuşoğlu said: "African countries have taken the necessary measures in a timely manner thanks to their experience in combating epidemic diseases."

"The number of cases and deaths on the continent is relatively low at the moment. We sincerely hope that this will continue and that the disease will be eradicated from the continent," he said.

The number of coronavirus cases in Africa jumped to nearly 107,500 on Sunday after some 3,500 people contracted the virus across the continent in the last 24 hours.

Since first appearing in Wuhan, China last December, the coronavirus has spread to at least 188 countries and regions.

The U.S., Russia, Brazil and several European countries are currently the hardest hit.

"Turkey is among the states that have overcome the first stage of the pandemic and can currently hold the number of new cases below its treatment capacity.

"Having been able to provide equipment assistance to some countries even in the first months of the outbreak, Turkey aims to increase its assistance capacity in the coming period," Çavuşoğlu said.

"As the country that has extended a helping hand to the largest number of countries after the United States and China, Turkey is trying to respond as soon as possible to such requests from our friendly African countries."

The post-coronavirus world "should be one that requires more international cooperation than before, not less," he said.

"Turkey is ready to do what is required of it in this regard alongside other countries," he added.

The minister recalled "the spirit of 1963," saying "the African continent will also overcome this challenge in unity."

"I sincerely believe that Africa will contribute not only to the welfare of its own people but also to the world order of the coming years and that the Turkish-African partnership will be shown as an example in the new post-pandemic world order, in which solidarity will become more important," he added.