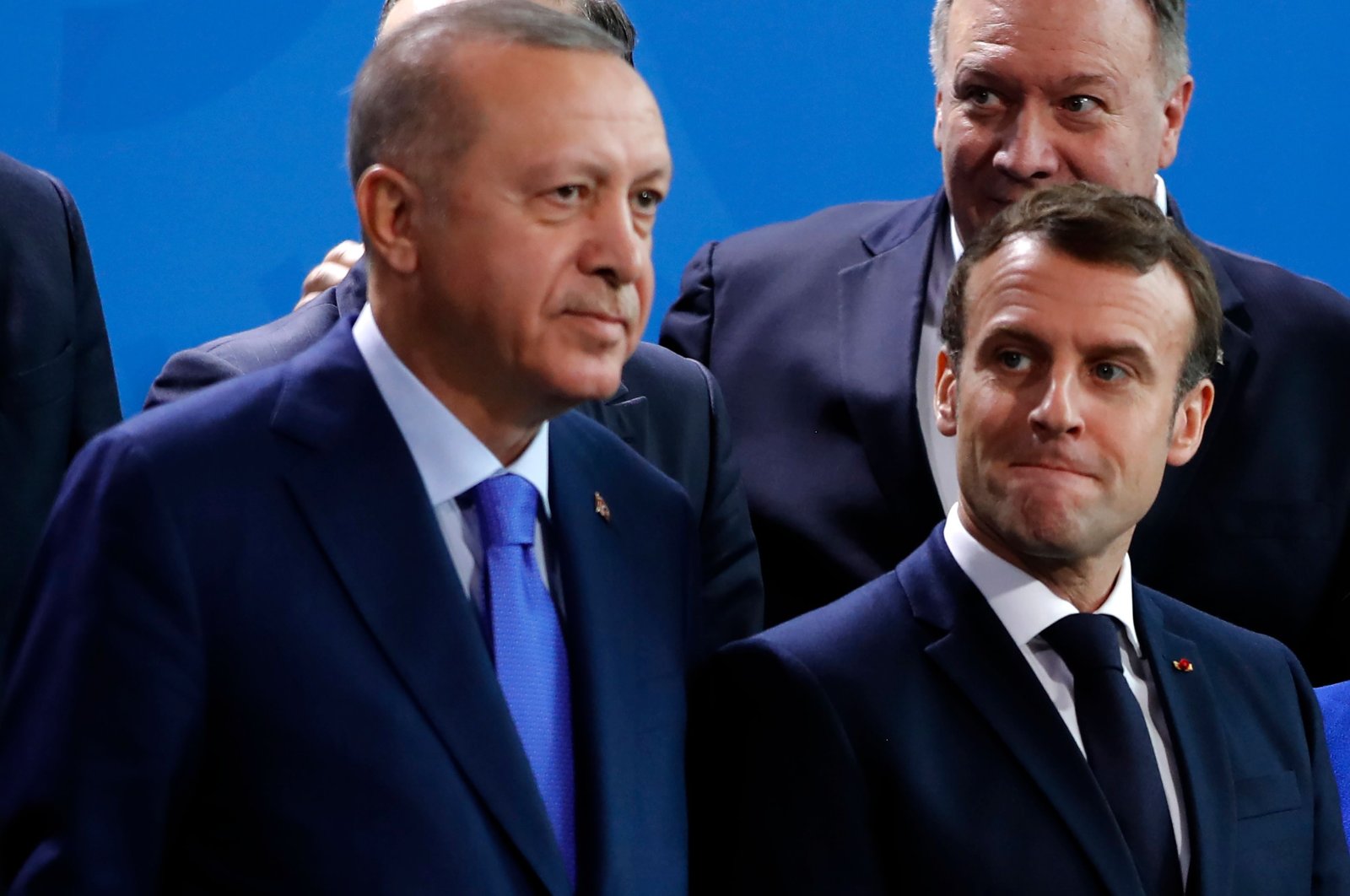 President Recep Tayyip Erdoğan (L) and French President Emmanuel Macron stand side-by-side as they wait for a picture during a Peace summit on Libya at the Chancellery in Berlin, Jan.19, 2020. (AFP)
by DAILY SABAH WITH AGENCIES Sep 13, 2020 11:32 am

As dialogue channels with Greece open via a NATO initiative, Turkey's Oruç Reis vessel takes a break from hydrocarbon exploration, yet Paris insists on fueling tension with constant provocations toward Ankara

Turkey's Oruç Reis seismic vessel's natural gas exploration in the Eastern Mediterranean, which is at the center of a row between Ankara and Athens, returned home over the weekend, as the dispute's focal point shifted toward France with French President Emmanuel Macron blatantly targeting Ankara.

The Oruç Reis returned to the Turkish port of Antalya Saturday night, its time at sea – as determined in its latest Navtex declaration – having come to an end. Navtex is a maritime communications system that allows ships to inform other vessels about their presence in an area.

The vessel's exploration work in the area initially started on Aug.10 and was scheduled to last until Sept.1. However, last week, the period was extended until Sept.12, with the expectation of another extension later, continuing until Sept.25. However, many argue that talks between Turkey and Greece initiated by NATO last week are the main reasons behind the vessel's break from work in order to enhance dialogue and ease tension.

Explaining Turkey’s position on the issue Sunday, Turkish Defense Minister Hulusi Akar reiterated that Ankara was ready to do whatever it takes to have a political solution and dialogue over the crisis.

“We expect the same from (Greece) as well,” he said, adding that provocations are not helpful for anyone, including Greece.

He underlined that Turkey doesn't hesitate to have diplomatic talks to ease tensions since it is in the right.

As far as the Oruç Reis' activities in the region are concerned, the minister stated that the exploration activities will continue in line with Turkey's plan.

"There is no giving up our rights in East Med," he indicated.

In Akar's opinion, Greek people should not follow Macron-led initiatives, forming part of the French president's schemes to save himself from the consequences of his failed policies in the region.

Akar’s comments came as he paid a visit to Turkey’s southwestern the Kaş district yesterday, across the Greek island of Kastellorizo (Megisti-Mies), a region lying in the heart of recent tensions. Akar was accompained by Chief of General Staff Yaşar Güler and commanders of army, navy and air force.

“We are going through a difficult and dangerous period. The Turkish leadership... is undermining the peaceful coexistence that was built over many decades by Greeks and Turks, who saw the sea between them not as an impenetrable frontier but as a passage of communication,” Sakellaropoulou told reporters. At its closest point, Kastellorizo, invaded by Italians in 1912 and formally ceded to Greece in 1947 Paris Peace treaties following World War 2, lies only 2 kilometers (1.2 miles) of Turkish mainland. The island recent made headlines in Turkey when Greek troops were deployed there, which violated its demilitarized status.

“We invite Greece to give up on its maximalist maritime zone claims, which are in violation of international law. It is vital that Greece withdraws its military vessels near our Oruç Reis exploration vessel, that it supports NATO’s de-escalation talks, that it ceases to militarize the eastern Aegean islands, including Kastellorizo (Megisti-Meis) and that it cedes its oppression toward the Western Thracian Turkish minority – which recently has increased – in order to de-escalate tensions,” the Turkish Foreign Ministry previously said in a written statement last week, urging Athens to act in the same manner with Ankara.

Reiterating that Turkey had the longest shoreline in the Eastern Mediterranean and was a candidate country for the European Union, the statement said that Greece and Turkey must sit at the table without preconditions for dialogue and cooperation.

Greece must not abuse the European Union for its own narrow-minded interests, while the EU and countries signing the declaration have to abandon their blindly unilateral and biased stance, which violates international law and the EU's acquis communautaire, under the guise of solidarity, the statement added.

Greece to purchase arms from France

Following the Oruç Reis's return, Greek government spokesperson Stelios Petsas called the ship's departure from the area "a positive step," in comments to the Skai news broadcaster Sunday, although no similarly progressive steps have yet been taken by Greece.

Instead, Greek Prime Minister Kyriakos Mitsotakis Saturday announced a "robust" arms purchase program and an overhaul of the country's military amid tension with Turkey.

"The time has come to reinforce the armed forces... these initiatives constitute a robust program that will become a national shield," the prime minister said in a keynote address in the northern city of Thessaloniki.

Greece and the Greek Cypriot administration have for weeks been sparring with Turkey about natural gas reserves and maritime boundaries. Ankara claims the right to prospect and drill for gas in areas the two EU member states claim for their own exclusive economic zones (EEZ).

Last week, at an informal summit hosted by Macron, leaders of the so-called EuroMed7 group warned that the European Union was ready to consider further sanctions if Turkey didn't halt its "unilateral activities" in the Eastern Mediterranean.

The EuroMed7 is an informal group of Mediterranean states in the EU, sometimes dubbed "Club Med," which held its first summit in 2016.

The club, which includes France, Italy, Spain, Malta, Portugal, Greece and the Greek Cypriot administration, met Thursday for its sixth summit at Porticcio, a coastal resort on the French island of Corsica.

"We Europeans need to be clear and firm with the government of President Erdoğan, which today is behaving in an unacceptable manner," Macroeun told reporters in Corsica.

“You will continue to have a lot more problems with me,” Erdoğan retorted to Macron's call for the EU to have a solid stance against “Erdoğan but not Turkey.”

Macron earlier also warned that Turkey was "no longer a partner" in the region, citing its maritime claims, drilling for gas in waters claimed by the Greek Cypriot administration and other "provocations."

Turkey lashed out in response to Macron's comments, with Erdoğan saying on Saturday that the French president was not in a position to lecture Turkey, recalling Paris' role in the massacres that occurred in Algeria War of Independence and the Rwandan Genocide.

“You (Macron) don’t have knowledge of history. You don’t even know France’s own history. Don’t mess with Turkey,” Erdoğan said in an event on Democracy and Freedom Island in the Sea of Marmara near Istanbul to mark the 40th anniversary of the Sept. 12, 1980, military coup. “You cannot lecture us on humanity,” Erdoğan added.

Paris and Ankara are at loggerheads not only over the maritime dispute but also over Turkey's backing of the internationally recognized government in the Libyan civil war. France is on better terms with Egypt and the United Arab Emirates (UAE), who back putschist Gen. Khalifa Haftar, though Macron denies that Paris also supports Haftar.

On the Eastern Mediterranean crisis, while many allies have sought a balance between Turkey and Greece, Paris' bold support for Athens has received strong reactions in Ankara.

The U.S. urges for dialogue

"Countries in the region need to resolve disagreements, including on security and energy resource and maritime issues, diplomatically and peacefully," Pompeo said in a fleeting trip to meet the Greek Cypriot administration's leader Nicos Anastasiades on Saturday night.

"Increased military tensions help no one but adversaries who would like to see division in transatlantic unity," he said.

Pompeo's trip comes shortly after the U.S. had lifted a decades-old arms embargo on the Greek Cypriot administration, outraging Turkey.