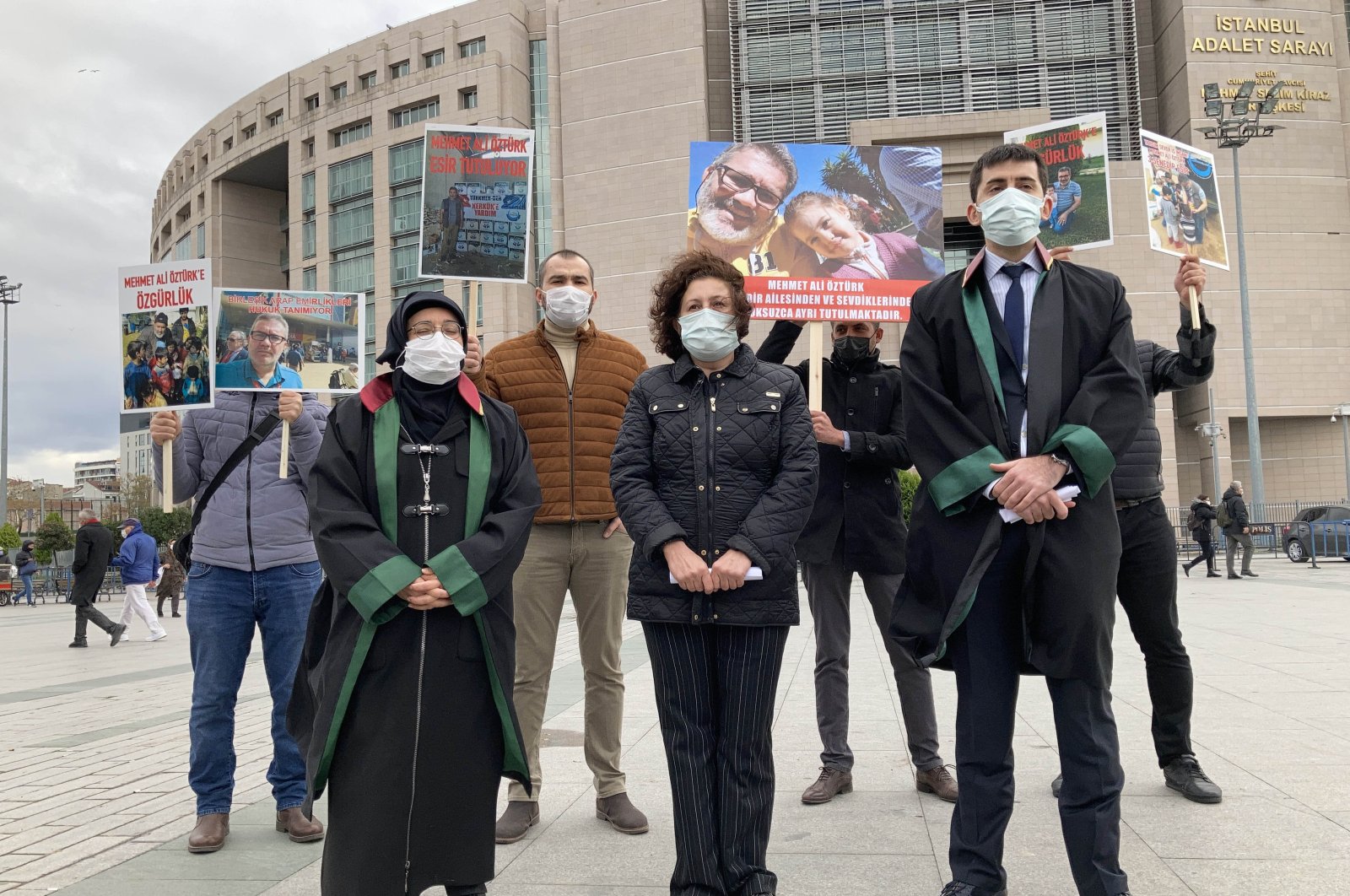 The relatives and lawyers of Turkish businessperson Mehmet Ali Öztürk, who has been remanded in custody for three years in the United Arab Emirates (UAE), protest in front of the Çağlayan courthouse in Istanbul, Turkey, Jan. 13, 2020. (AA Photo)
by DAILY SABAH WITH AA Jan 13, 2021 12:15 pm
RECOMMENDED

The lawyers of a Turkish businessperson who has been remanded in custody for three years in the United Arab Emirates (UAE) on trumped-up charges have applied to the United Nations for help.

Mete Gencer and Gülden Sönmez, Mehmet Ali Öztürk's lawyers, in a statement on Tuesday said they had applied to the U.N. Working Group of Arbitrary Detention citing that their client has been subjected to severe torture and threats to his son's life from authorities hoping to extract false confessions against Turkey.

The application says that the UAE "committed the crimes of unfair, arbitrary detention and torture and violated United Nations conventions and the rules of international law."

His lawyers stated that Öztürk was tortured for 52 days, causing him to lose 25 kilograms (over 55 pounds), endangering his life.

Authorities threatened to kill Öztürk's son, a student in the United States at the time, who was subjected to repeated questioning by the FBI as well as prevented from moving to Turkey for a time.

His son was eventually forced to return to Turkey after all educational and career opportunities were "completely cut off" to him, the statement added.

The statement explained that because Mehmet Ali Öztürk did not buckle when tortured he was subjected to a show trial, convicted of supporting terrorism and sentenced to life in prison.

El-Whatba Prison, where Mehmet Ali Öztürk is now incarcerated, has long been criticized for its inhumane conditions.

On Dec. 11, the businessperson's lawyers filed a criminal complaint with Istanbul prosecutors against UAE officials to be forwarded to the Justice Ministry.

On Dec. 16, his lawyers applied to Turkey's Human Rights and Equality Institution.

Relations between Turkey and the UAE have hit an all-time low, and President Recep Tayyip Erdoğan has said that Ankara could suspend diplomatic ties with the Abu Dhabi administration after the UAE-Israel deal. Turkish officials say the UAE supports terrorist organizations that target Turkey, using these organizations as a useful political and military tool abroad.

The UAE is a part of a Saudi-led coalition in Yemen that launched a devastating air campaign to roll back Houthi territorial gains in 2015, further escalating the crisis in the war-torn country. In Libya, Abu Dhabi backs putschist Gen. Khalifa Haftar and seeks to oust the legitimate U.N.-recognized GNA. In Syria, it supports the Bashar Assad regime in its offensive against democracy and civil rights.

In August, Turkey's National Intelligence Organization (MIT) revealed that the UAE, in cooperation with Israel, was going to try to destabilize Turkey, Iran and Qatar. MIT added that it was looking for UAE spy Mohammed Dahlan, who maintains contact with certain recently established media outlets in Turkey and serves the cause by channeling funds to these organizations.

Last year, Turkey also revealed that an Emirati spy network had been operating across the country.

However, the UAE is willing to normalize its relations with Turkey, the UAE state minister for foreign affairs said late Sunday.

Speaking in an interview with UAE-based SkyNews Arabia, Anwar Gargash said: "What we want to tell Turkey is, we want to normalize our relations within the framework of mutual respect for sovereignty."

Days after ties were normalized between Qatar and Saudi Arabia, the UAE, Bahrain and Egypt, Gargash expressed that the UAE is Turkey's No. 1 trade partner in the Middle East, adding: "We don't cherish any feuds with Turkey."