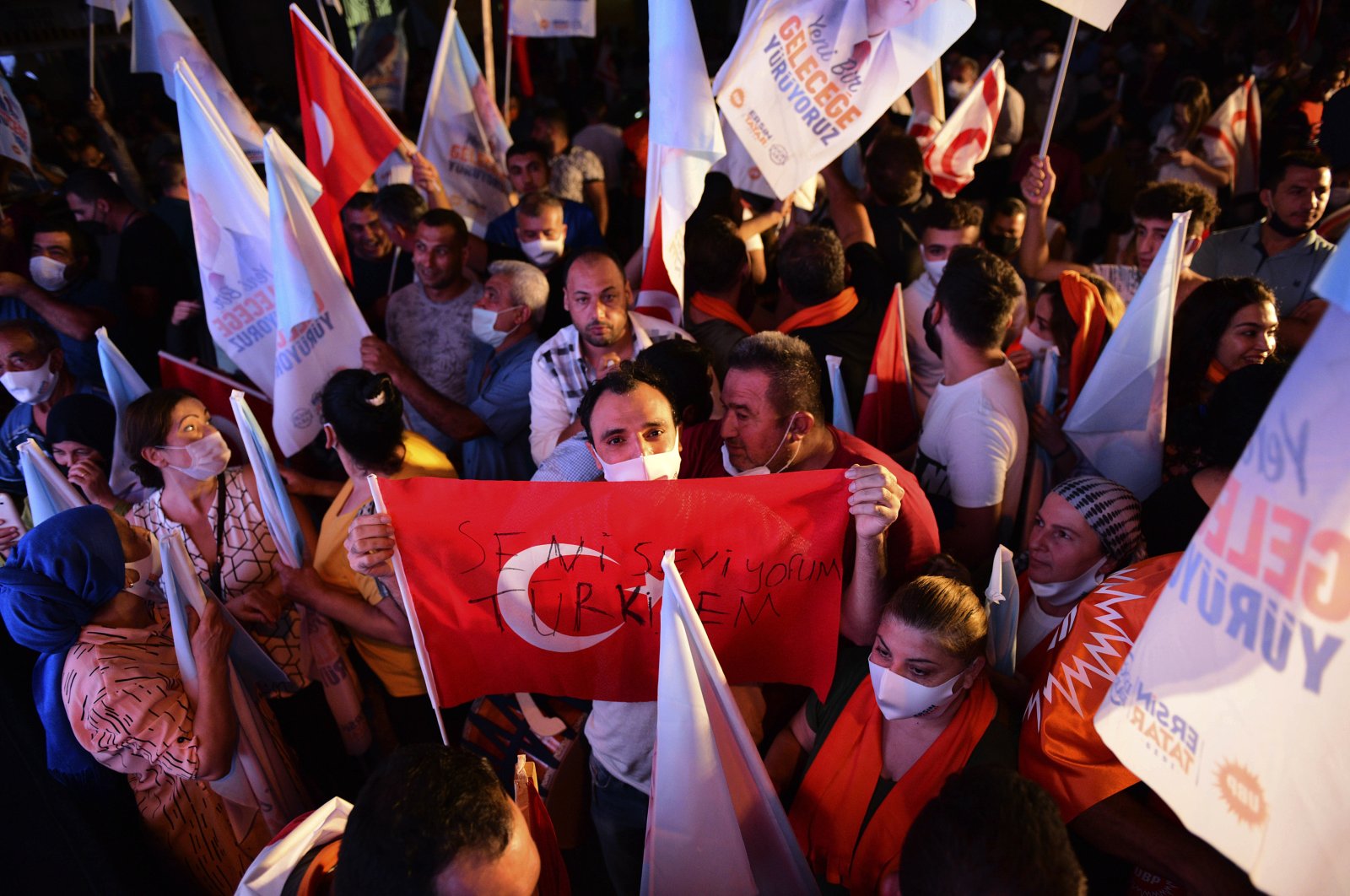 A supporter of newly elected Turkish Cypriot leader Ersin Tatar holds a Turkish flag and celebrates with others in the capital Lefkoşa (Nicosia), Oct. 18, 2020. (AP Photo)
by DAILY SABAH WITH AA
Oct 21, 2020 11:35 am

Citizens in the Turkish Republic of Northern Cyprus (TRNC) are hopeful that newly elected President Ersin Tatar will bring the country to a better point with Turkey's support.

Speaking to the Anadolu Agency (AA), people in the capital Lefkoşa (Nicosia) expressed their opinions about the new political period in the TRNC following the presidential elections last Sunday.

Zülfikar Öznur said that Tatar’s election will be good for the TRNC and added: “I am hopeful for Tatar. We cannot be separated from Turkey, because it is our motherland. Ersin Tatar is attached to Turkey. I know Mr. Tatar for a long time. He is a good, honest and nationalistic person. He will never surrender us to foreigners.”

Öznur also stated that they are expecting a better performance from Tatar in negotiations on the Cyprus issue compared with previous politicians. “We will be better with the support of Turkey. I wish it will be best for our nation and our kids.”

Hüseyin Dikbaş said that he has been living in the TRNC for more than 30 years and shared similar opinions with all former presidents except the last president, Mustafa Akıncı.

Voters in the TRNC on Sunday narrowly elected Tatar, who was backed by Ankara, at a time of heightened tensions in the Eastern Mediterranean. Tatar is an advocate of a two-state solution and held the post of premier in the country, having edged out previous Turkish Cypriot leader Akıncı, a supporter of a federalist solution on the island.

Tatar, who ran as the candidate of the National Unity Party (UBP) and was the former prime minister, became president after winning the second round of presidential elections with 51.74% of the votes against rival Akıncı, who obtained 48.26%, according to the unofficial count.

“I believe that Tatar will provide a very coherent and healthy dialogue with Turkey. I wish it will be best for our nation and country. We are happy that Tatar is elected. There will be no more compromises like before. Tatar will be more determined,” Dikbaş said.

He added that Tatar will take a strong stance in the negotiation process with the Greek side of the island and the TRNC citizens elected him for that reason.

Meanwhile, Ahmet Cabacaba, a TRNC resident interviewed by AA, stated that Tatar is the right politician with a long political career who can realize a deal if the Greek side also backs the process. Another citizen Merve Üresin told AA that the only possible solution would be based on the presence of two independent states with the maintenance of Turkey’s guarantorship status.

TRNC citizen Tanem Yalgıç also said that the federal solution is an outdated formula and a two-state solution that Tatar advocates should prevail.

The island of Cyprus has been divided into a Turkish Cypriot government in the north and a Greek Cypriot administration in the south since a 1974 military coup aimed at Cyprus's annexation by Greece. Turkey's military intervention stopped the persecution and violence against Turkish Cypriots by ultra-nationalist Greek Cypriots that spanned years.

Over the decades, there have been several attempts to resolve the Cyprus dispute, all amounting to nothing. The latest attempt held with the participation of each of the island's guarantor countries came to an end with no signs of progress in Switzerland in 2017. The United Nations is expected to convene a meeting between the two sides, Turkey, Greece – the key ally of the Greek Cypriot administration – as well as former colonial ruler Britain.

Turkey, as a guarantor nation for the TRNC, is currently carrying out hydrocarbon exploration activities in the Eastern Mediterranean. Ankara has consistently contested the Greek Cypriot administration's unilateral drilling activities in the region, asserting that the TRNC also had the right to the area's hydrocarbon resources.