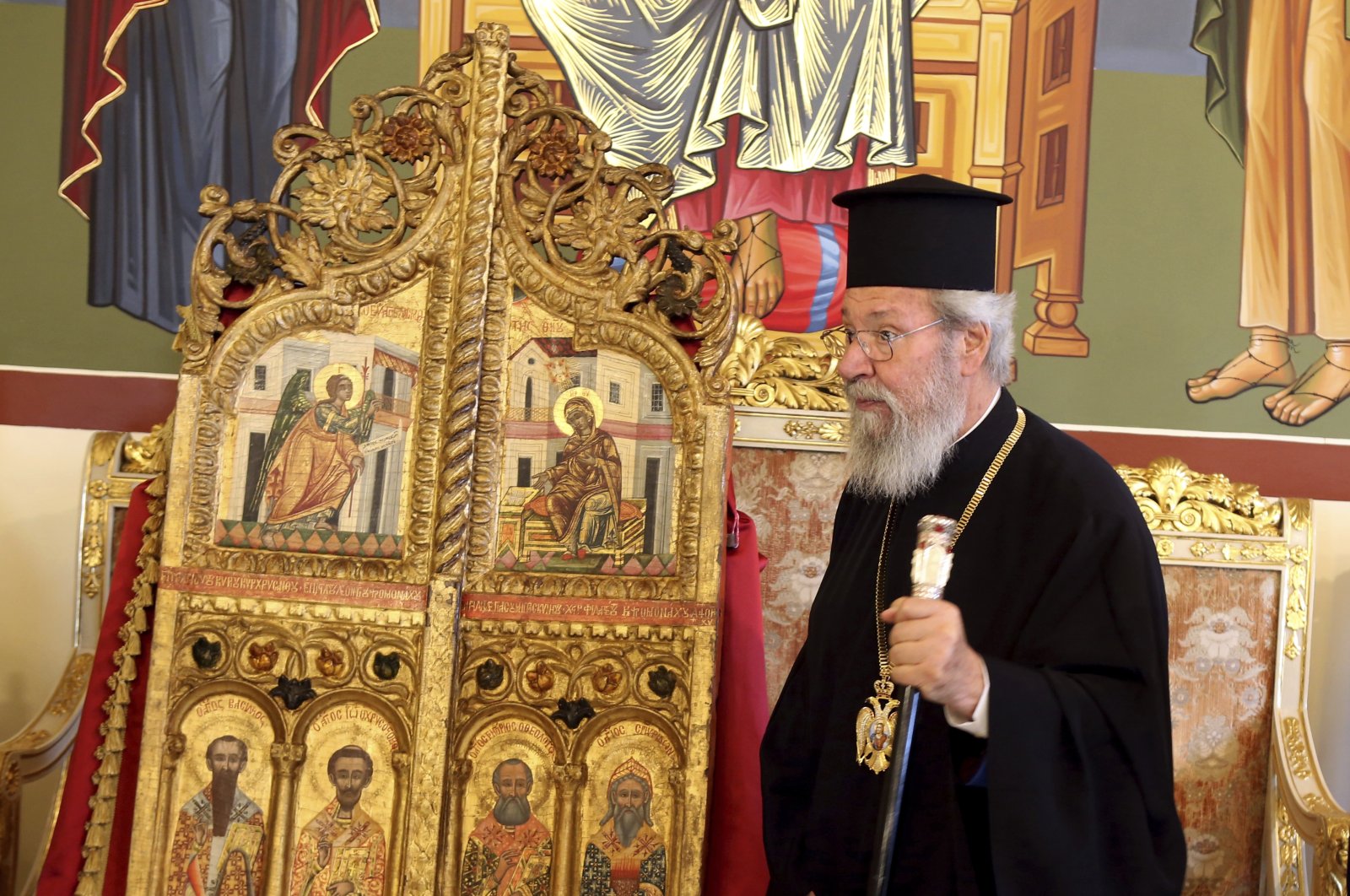 The leader of the Greek Cyprus Orthodox Church, Archbishop Chrysostomos II, stands next to a pair of ornate, gilded doors that guard the altar of a church, at the Archbishopric in the capital of the Greek Cypriot administration, Nicosia, Sept. 16, 2021. (AP Photo)
by Anadolu Agency Sep 28, 2021 3:52 pm
RECOMMENDED

The Turkish Republic of Northern Cyprus (TRNC) has rebuked the Greek Cypriot archbishop over "racist" and "arrogant" remarks toward the island's Turkish Cypriots.

"The Archbishop's (Chrysostomos II) bigoted statements demonstrate that the Greek Cypriot mentality, which has no tolerance for the Turkish presence on the Island, has not and never will change in any way," said an official statement released on Monday by the Foreign Ministry of the TRNC.

The statement continued: "Archbishop's view that 'Turkish Cypriots cannot have the same rights as the Greek Cypriot majority' explains the reasons behind the inability to reach a mutually acceptable agreement on the Island since the collapse of the 1960 Partnership Republic."

It further said that the archbishop's comments amounted to an attempt to "brainwash" Greek Cypriots and "instill racism," demonstrating the prejudice and hostility toward the Turkish Cypriots on the island.

Stressing that the TRNC had adopted a new vision and was now on an irreversible path, the ministry said that the archbishop had failed to realize this fact and was disconnected from the current reality.

"It is a fact that there are two States on the Island, a Greek and a Turkish State," it said, adding that the TRNC had determined this new vision by "taking this fact and the changing conditions into account."

"Our new vision, which was decided in the light of these facts, has been shared with the Guarantor country Turkey and has received full support as usual. The unwavering support of the Motherland gives confidence to the Turkish Cypriot People."

The ministry added that this fact had to be accepted before an acceptable agreement could be reached on the island of Cyprus.

"We once again reiterate that the best and the realistic way forward is for the two Peoples to live in their separate States within the framework of good neighborly relations," it concluded.

The island of Cyprus has been divided since 1964, when ethnic attacks forced Turkish Cypriots to withdraw into enclaves for their safety. In 1974, a Greek Cypriot coup aiming at Greece's annexation led to Turkey's military intervention as a guarantor power. The TRNC was founded in 1983.

The Greek Cypriot administration, backed by Greece, became a member of the European Union in 2004, although in a referendum that year most Greek Cypriots rejected a U.N. settlement plan which envisaged a reunited Cyprus joining the EU.