Turkish Cyprus urges Greek side not to exploit humanitarian issues 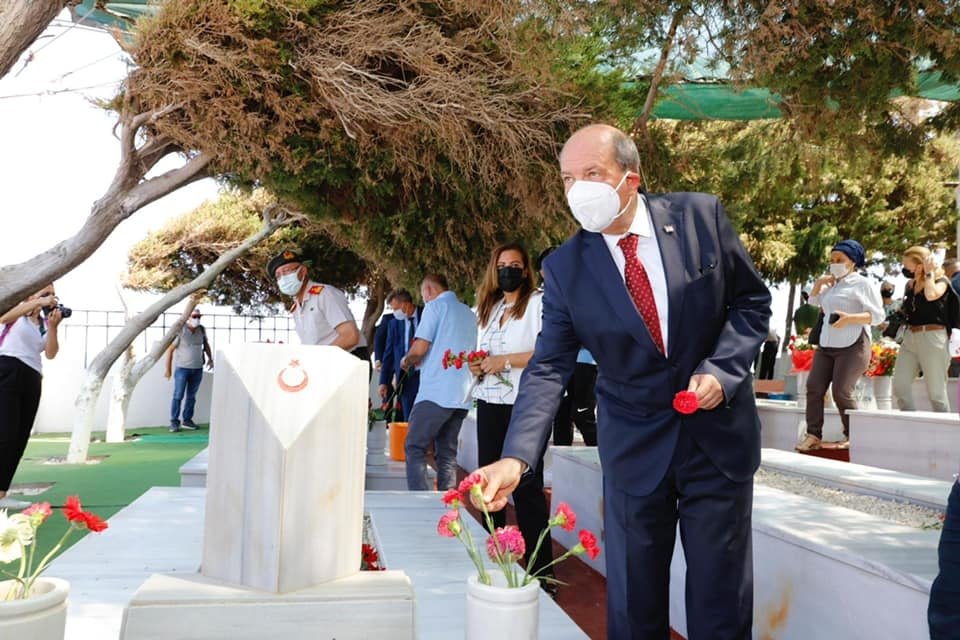 Turkish Republic of Nothern Cyprus (TRNC) President Ersin Tatar participates in a ceremony to commemorate those who lost their lives during clashes with Greek Cypriots in Erenköy (Kokkina), Lefke, TRNC, Aug. 8, 2021. (AA Photo)
by DAILY SABAH WITH AA Aug 12, 2021 11:16 am
RECOMMENDED

The Presidency of the Turkish Republic of Northern Cyprus (TRNC) Thursday stated that the Greek Cypriot administration continues to use the hundreds of people who went missing during the conflicts in the 1960s and 1970s on the island as propaganda against Turkey.

"Greek Cypriot Presidential Commissioner Photis Photiou and Greek Cypriot politicians continue to exploit this issue, which causes deep wounds between the two peoples, in order to cast a shadow over the ongoing studies by using the issue of missing persons, which is essentially a very sensitive humanitarian issue, as propaganda material against Turkey," the presidency said in a written statement.

"The functioning of the Committee on Missing Persons in Cyprus, which struggles against time to find the missing, and produces and continues to produce results with the extraordinary efforts of scientists from both sides, will be more effective if the Greek side finds the burial places of the missing and persuades witnesses to speak, as the TRNC and the Republic of Turkey are doing," it added.

"In this context, we invite Photis Photiou and his team, speaking on behalf of the Greek Cypriot administration, to cooperate in finding all the missing, instead of making unfounded propaganda statements without thinking about the families of the disappeared," it said.

The Greek side in Cyprus recently paid tribute to all those who lost their lives during the 1974 Turkish operation. In a speech there, Photiou blamed Turkey and said there is no cooperation regarding the humanitarian issue.

The Committee on Missing Persons in Cyprus, established in 1981 by an agreement between the Greek Cypriot and Turkish Cypriot communities with the backing of the United Nations, is tasked with finding people that went missing during the conflicts in the 1960s and 1970s.

Many went missing in the 1960s and in 1974 as tensions between Turkish and Greek Cypriots escalated to abductions and extrajudicial killings. Although the Turkish military operation in 1974 succeeded in stopping the killings, the burial sites of those missing remain unclear and work to identify discovered remains is ongoing.

Time is the main obstacle in identifying the remains, and the forensic teams' meticulous work of identifying the victims has been hindered by a lack of witnesses and remaining relatives.

In December, 14 Turkish Cypriot children killed by the Greek terrorist organization Ethniki Organosis Kyprion Agoniston (EOKA) during the 1974 Cyprus Peace Operation were laid to rest in the TRNC.

The remains of the 14 children, seven girls and seven boys, were found during excavations in the village of Muratağa (Maratha). Their identities were confirmed through DNA tests 46 years after the massacre. It was determined that the youngest of the children was only 4 months old and the oldest 15.

On Aug. 14, 1974, the EOKA raided three Turkish villages in the Famagusta district of Cyprus and killed a total of 126 Turkish Cypriots. In the villages of Muratağa and Sandallar (Santalaris), victims were buried in mass graves. In search efforts between 2015 and 2016, 89 bodies were found in the burial sites.

The United Nations at the time described the massacre as "a further crime against humanity committed by the Greek and Greek Cypriot gunmen."