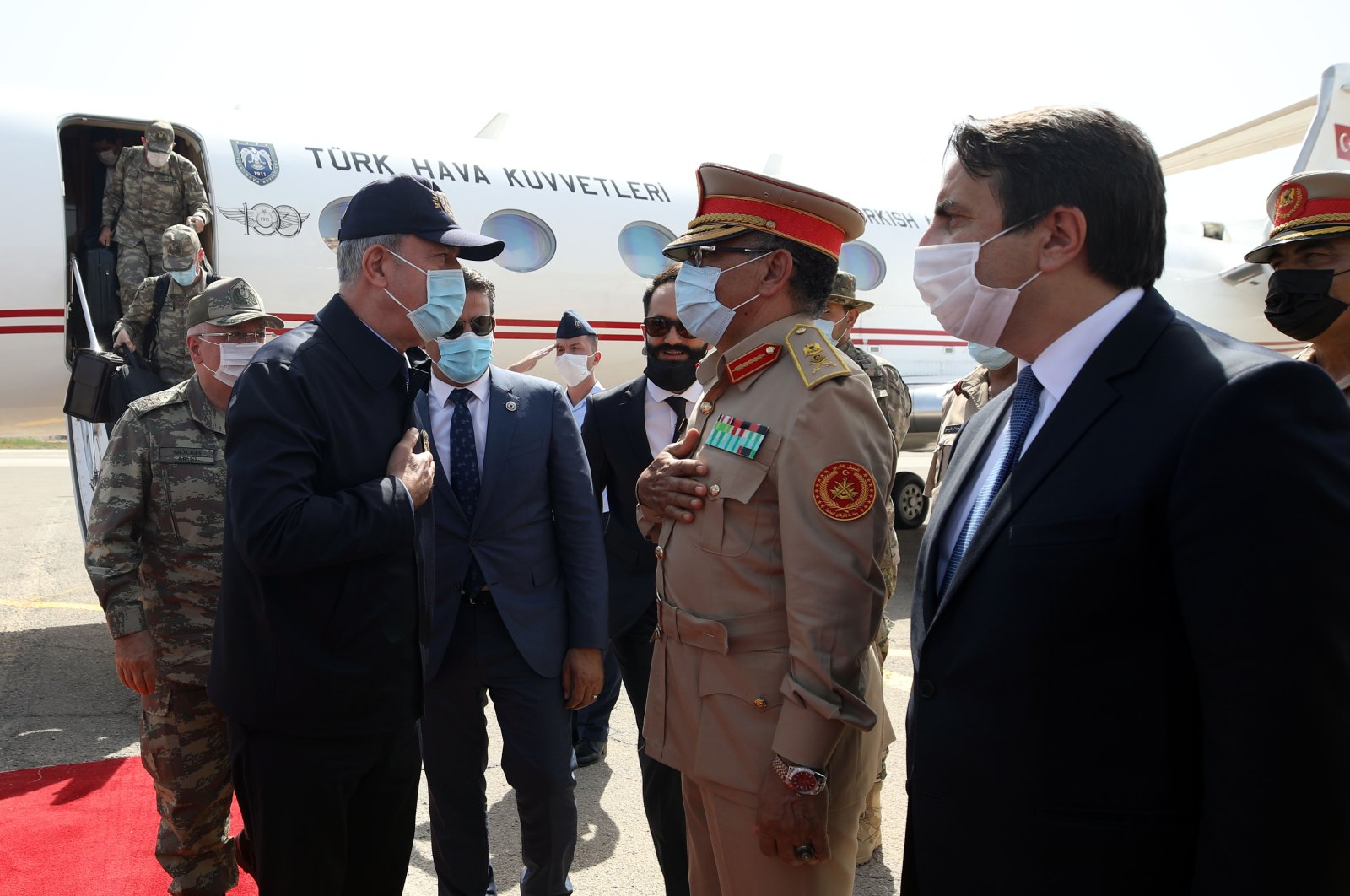 Turkey’s defense minister and chief of staff arrived in Libya’s capital Tripoli Monday on an unannounced visit to inspect implementations of the memorandum of understanding signed between the two countries last year. Defense Minister Hulusi Akar underlined in his visit that Turkey stands by the United Nations-recognized Government of National Accord (GNA) and that "Libya belongs to the Libyan people."

A military ceremony was held for Akar and Chief of Staff Gen. Yaşar Güler upon their arrival at the Mitiga International Airport in Tripoli. Following the ceremony, Akar and Güler went to the Defense Security Cooperation and Training Assistance Advisory Command, which was created as part of the memorandum between Turkey and Libya, and met Libyan Deputy Defense Minister Salahaddin Abdullah an-Namrush.

"In accordance with our president's instructions, we will in the upcoming period make all kinds of efforts as we have until today to make the cease-fire permanent for the sake of Libya's unity, comfort and peace. In this manner, our Qatari brothers are also with us," Akar said, adding that an-Namrush is also doing everything possible for peace in the war-ravaged country. "We believe we will reach the desired outcomes in supporting our Libyan brothers in their cause," Akar added.

On Nov. 27, 2019, Ankara and Tripoli signed two memorandums, one on military cooperation and the other on maritime boundaries of countries in the Eastern Mediterranean. The maritime pact asserted Turkey's rights in the Eastern Mediterranean in the face of unilateral drilling by the Greek Cypriot administration, clarifying that the Turkish Republic of Northern Cyprus (TRNC) also has rights to the resources in the area. It went into effect on Dec. 8.

Akar and Güler's arrival was followed by the arrival of Qatari Defense Minister Khalid bin Mohammed al-Atiye and his accompanying delegation.

Their visit coincided with that of German Foreign Minister Heiko Maas who came to spur international efforts to resolve the country's long-running conflict. It is Maas' first visit to Libya following a summit in Berlin in January when world powers agreed to a peace process for the war-torn country that has largely fallen flat.

"We see a deceptive calm in Libya at the moment. Both sides and their international allies are continuing to arm the country on a massive scale and are maintaining preconditions for a cease-fire," Maas said in a statement on his arrival. He is scheduled to meet the head of the U.N.-recognized Libyan government, Fayez Sarraj, in the capital to discuss how to achieve peace in the face of putschist Gen. Khalifa Haftar’s aggression.

Libyan Foreign Minister Mohamed Taha Siala and Interior Minister Fathi Bashagha are also scheduled to participate in the talks "about ways out of this very dangerous situation," Maas said, adding he intends to discuss a U.N. proposal for a possible de-militarized zone around Sirte. A meeting is also scheduled with Mustafa Sanallah, chairman of Libya's National Oil Corporation (NOC).

"An end to the oil blockade and a fairer distribution of oil revenues are also crucial for a solution to the conflict in Libya," Maas said.

The country has the capacity to produce 1.7 million barrels of oil per day. However, this amount fell to 92,000 barrels per day, which is a remarkable drop for a country that was a crucial provider of both oil and gas to Europe.

Libya is struggling with divided institutions, dysfunction, corruption, a struggling economy and little or no oil revenues coming in even though the country has the largest proven crude oil reserves in Africa at 48.4 billion barrels. Natural gas and oil revenues make up approximately 90% of the government’s revenue.

Underlining that he will visit Abu Dhabi after his visit to Libya, Maas said he will discuss the topics of Iran, Syria, Qatar and Lebanon as well as the conflict in Libya with his counterparts. The United Arab Emirates (UAE) wields influence over Haftar, and Germany expects them to use it in line with the Berlin process, Maas added.

Libya has been torn by civil war since the ouster of late ruler Moammar Gadhafi in 2011. The government was founded in 2015 under a U.N.-led agreement, but efforts for a long-term political settlement failed due to a military offensive by forces loyal to warlord Haftar.

The U.N. recognizes the government headed by Sarraj as the country's legitimate authority, as Tripoli has battled Haftar's militias since April 2019 in a conflict that has taken more than 1,000 lives.

Turkey continues to support the internationally recognized government, but Haftar has been backed by Russia, France, Egypt and the UAE.