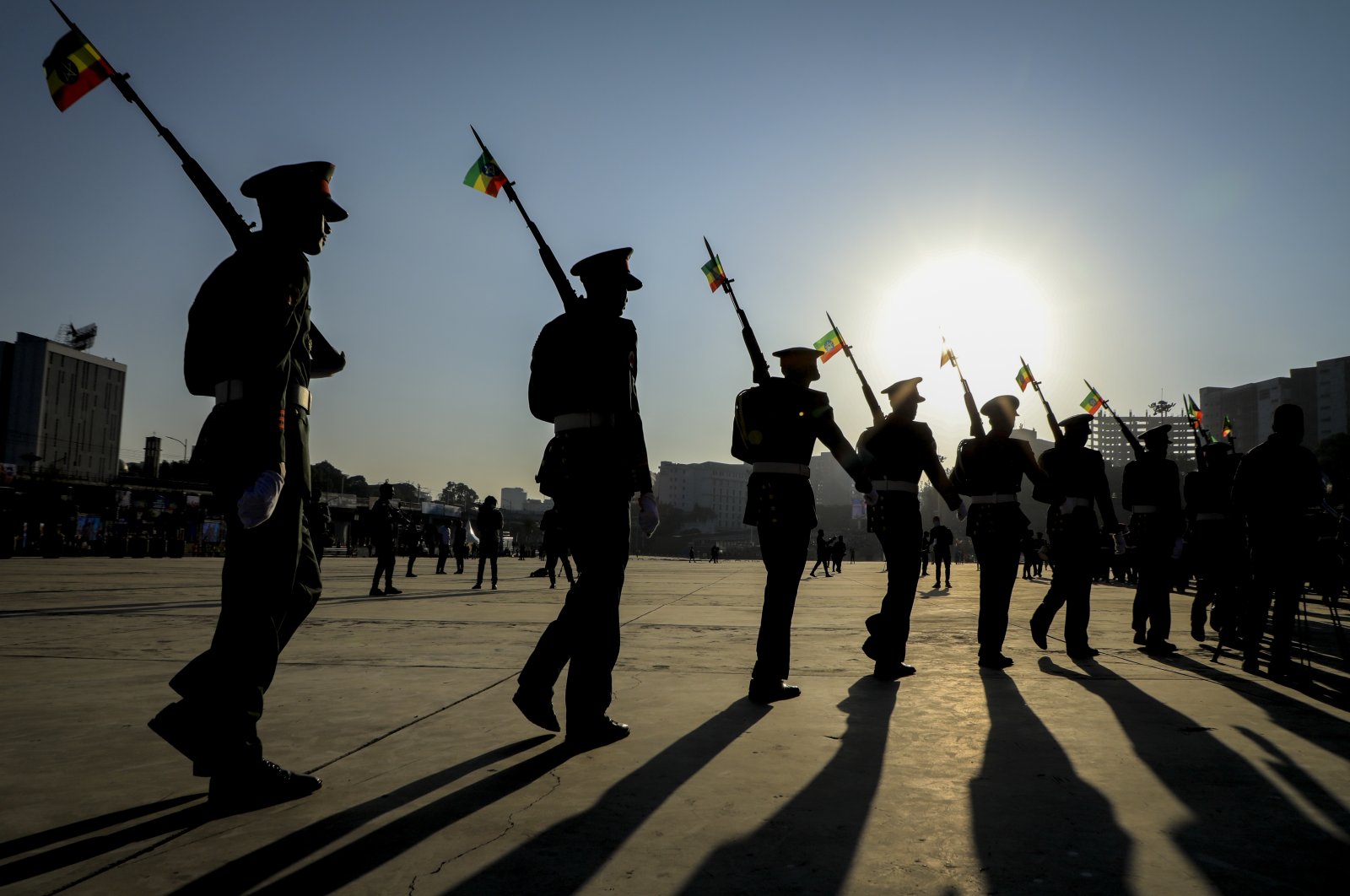 Ethiopian military parade with national flags attached to their rifles at a rally organized by local authorities is held to show support for the Ethiopian National Defense Force (ENDF), at Meskel Square in downtown Addis Ababa, Ethiopia, Nov. 7, 2021. (AP Photo)
by DAILY SABAH Nov 23, 2021 8:48 am
RECOMMENDED

As the year-long conflict moves closer to the capital Addis Ababa, the Turkish Embassy in the Ethiopia advised its citizens on Monday to leave the country.

The embassy said on Twitter: "In the face of the rapid developments in Ethiopia's security situation, our citizens who are in the country are advised to leave Ethiopia by scheduled aircraft."

The embassy also posted its phone number and e-mail.

An estimated tens of thousands of people have been killed in the war between Ethiopian and allied forces and fighters from the country’s northern Tigray region, who long dominated the national government. The United States and others have warned that Africa’s second-most populous country could fracture and destabilize the Horn of Africa.

In response, the spokesperson for the Tigray forces Getachew Reda tweeted that “our forces won't relent on their inexorable advance towards bringing (Abiy's) chokehold on our people to an end.” The Tigray forces say they are pressuring Ethiopia's government to lift a months-long blockade of the Tigray region of some 6 million people, but they also want Abiy out of power.

Envoys from the African Union and the U.S. have continued diplomatic efforts in pursuit of a ceasefire to the fighting and talks without preconditions on a political solution.

In a year’s time, Abiy’s government has gone from describing the Tigray conflict as a “law enforcement operation” to an “existential war." With Ethiopia's military reportedly weakened in recent months, and with its retreat from Tigray in June, ethnic-based regional forces have been stepping up and Abiy's government has called on all able citizens to join the fight.

The war has already killed thousands and pushed hundreds of thousands into famine-like condition, according to the United Nations.

Fears of a rebel advance on the capital have prompted several countries including the U.S. and the United Kingdom to pull out non-essential diplomatic staff.

These countries are also urging their citizens to leave Ethiopia while commercial flights are still available.