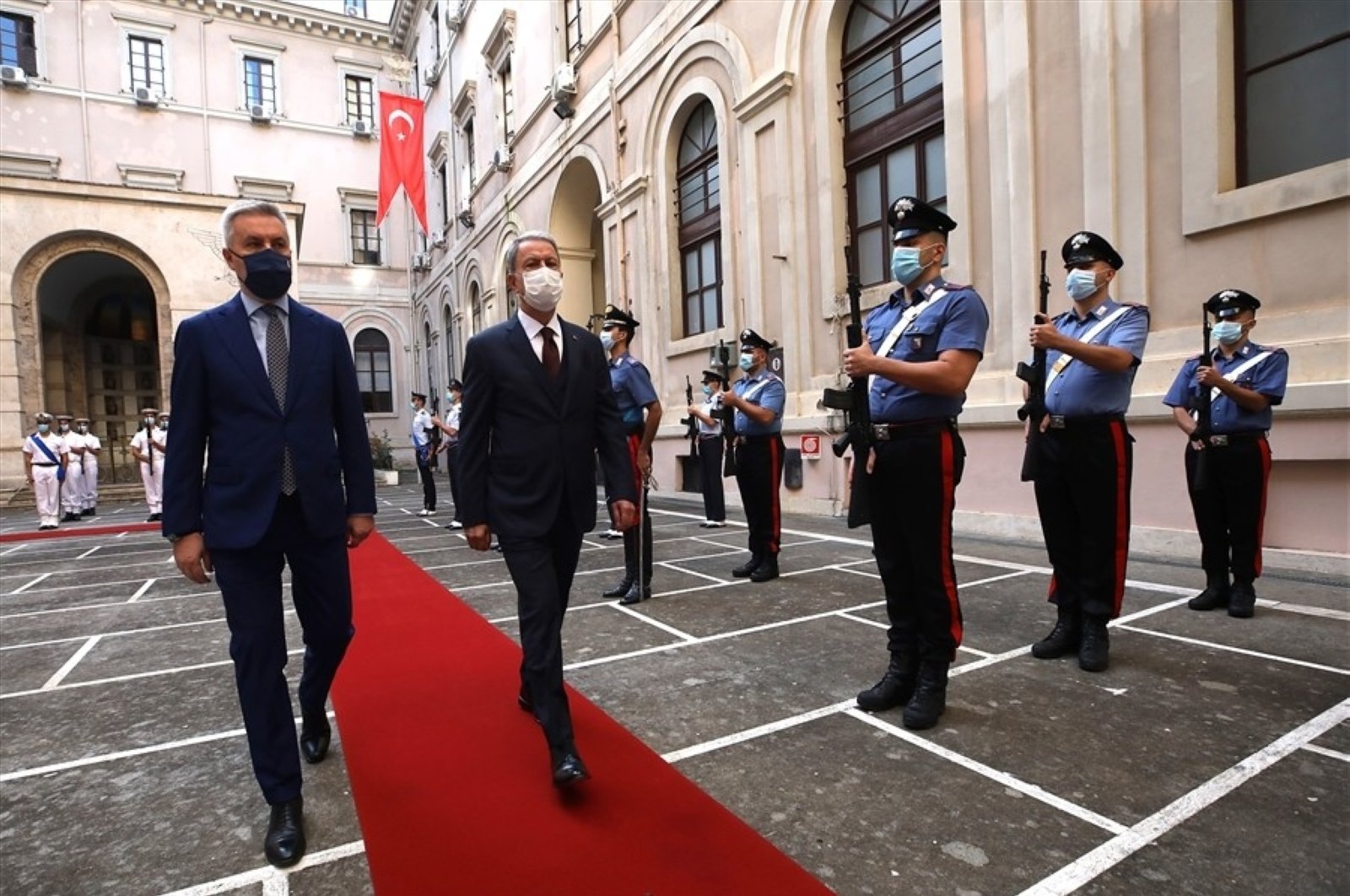 Turkish Defense Minister Hulusi Akar met with his Italian counterpart Lorenzo Guerini on Friday to discuss the developments in Libya and the Eastern Mediterranean.

According to a statement from the Turkish Defense Ministry, during the meetings, apart from bilateral relations and regional issues, the topics of Libya and the Eastern Mediterranean were the most discussed items on the agenda.

The statement said Akar highlighted the importance of cooperation with Italy on both issues and underlined that Turkey is in favor of dialogue in the Eastern Mediterranean based on international maritime law.

He further indicated that despite Turkey's positive, well-intended steps, the provocations in the region against the country continue.

Akar said that Ankara is in support of an independent and sovereign Libya and will continue to do what it takes to achieve stability in the region.

Turkey supports Libya's United Nations-recognized Government of National Accord (GNA) and has helped it fend off attacks by putschist Gen. Khalifa Haftar.

Later in the day, Akar reiterated the content of the meetings and said that he further underlined Turkey's right path in the Eastern Mediterranean.

"We are defending the right to determine the dialogue mechanisms between the two countries (Turkey and Greece) in order to prevent any accidents in the region. And we are hopeful in this aim of ours," he said.

The minister further announced that the Turkish and Greek military delegations held their first technical meeting to form a mechanism for land and sea boundary clarification at the NATO base on Friday.

Tensions have recently escalated regarding the issue of energy exploration in the Eastern Mediterranean.

Meanwhile, Turkey has issued a new Navtex in Lesbos, stating that Greece has violated the Treaty of Lausanne on the island.

Navtex, or navigational telex, is a maritime communications system that allows ships to inform other vessels about their presence in an area as well as other information.

The Navtex was issued after Greece violated the demilitarized status of the Aegean island despite the 1923 treaty and includes the dates from Oct. 9 to Oct. 13. Turkey had issued two other Navtex over the violation of the treaty in September.

Lesbos is a Greek island located in the northeastern Aegean Sea, which is separated from Turkey by the narrow Mytilini Strait

Turkey has recently criticized Greece for military deployment to the demilitarized island of Kastellorizo (Megisti-Meis), calling it a provocation and a display of its true intentions in the Eastern Mediterranean.

The island of Kastellorizo is only 2 kilometers (1.2 miles) from the Turkish shore. Greek armed forces carried out a military drill on Kastellorizo in November 2019. Starting with the Treaty of London in 1913, the militarization of the Eastern Aegean Islands was restricted and their demilitarized status was confirmed in the Treaty of Lausanne signed in 1923. The 1947 Treaty of Paris, which ceded the Dodecanese islands from Italy to Greece, also confirmed the demilitarized status.

The rearming of the demilitarized Aegean islands has always been a hot debate between the two countries, especially after the 1960s when relations between Ankara and Athens turned sour over the Cyprus issue and Greece's extended claims over Aegean airspace and territorial waters. Turkey's first reaction to Greece's arming of the islands in the Aegean was a diplomatic note given to Athens on June 29, 1964.