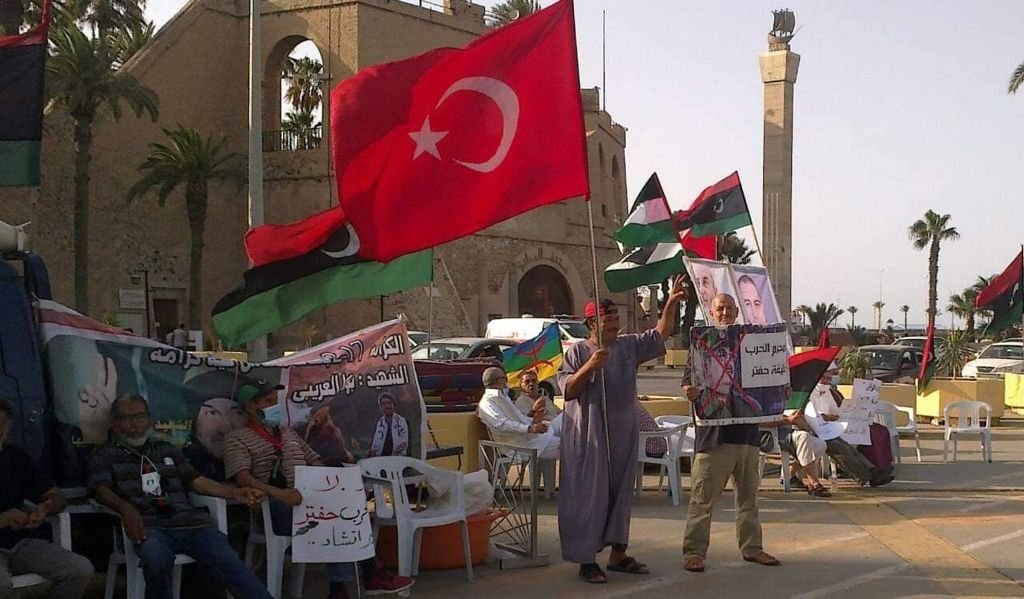 Libyans hold Turkish and Libyan flags together in a protest against putschist Gen. Khalifa Haftar's forces in the eastern part of the country, Tripoli, Libya, July 12, 2021. (AA Photo)
by Daily Sabah with AA Oct 21, 2021 9:09 am
RECOMMENDED

During the meeting, the two officials discussed ways to strengthen and support relations at all levels, according to a statement by the press office of the High Council of State. They spoke about the latest developments regarding elections in Libya scheduled for December, emphasizing the importance of holding them on time.
Al-Mishri and Önal also touched on the Libyan Stability Initiative conference which is scheduled to be held Thursday in Tripoli with the participation of several countries, including Turkey.
Libyan Foreign Minister Najla Mangoush announced that the conference will be held on Oct. 21 with participation at the ministerial level.
Libyan lawmakers voted on Tuesday to reschedule parliamentary elections for January instead of holding them on Dec. 24 as planned, a spokesperson said, a move likely to increase tensions among Libyan rivals already divided over bills regulating the planned elections.
Abdullah Bliheg, a spokesperson for the legislature, said lawmakers decided to hold parliamentary elections a month after the presidential vote scheduled for late December.
A U.N.-brokered road map had set both parliamentary and presidential elections for Dec. 24. The elections have been seen by many as a step forward to end the country’s divisions. There has been pressure from international governments, including the U.S., on Libyan stakeholders to hold elections as scheduled.
Elections are supposed to help unify the country after years of conflict and division, but disputes over their legal and constitutional basis have laid bare the extent of the split between the country's east and west.