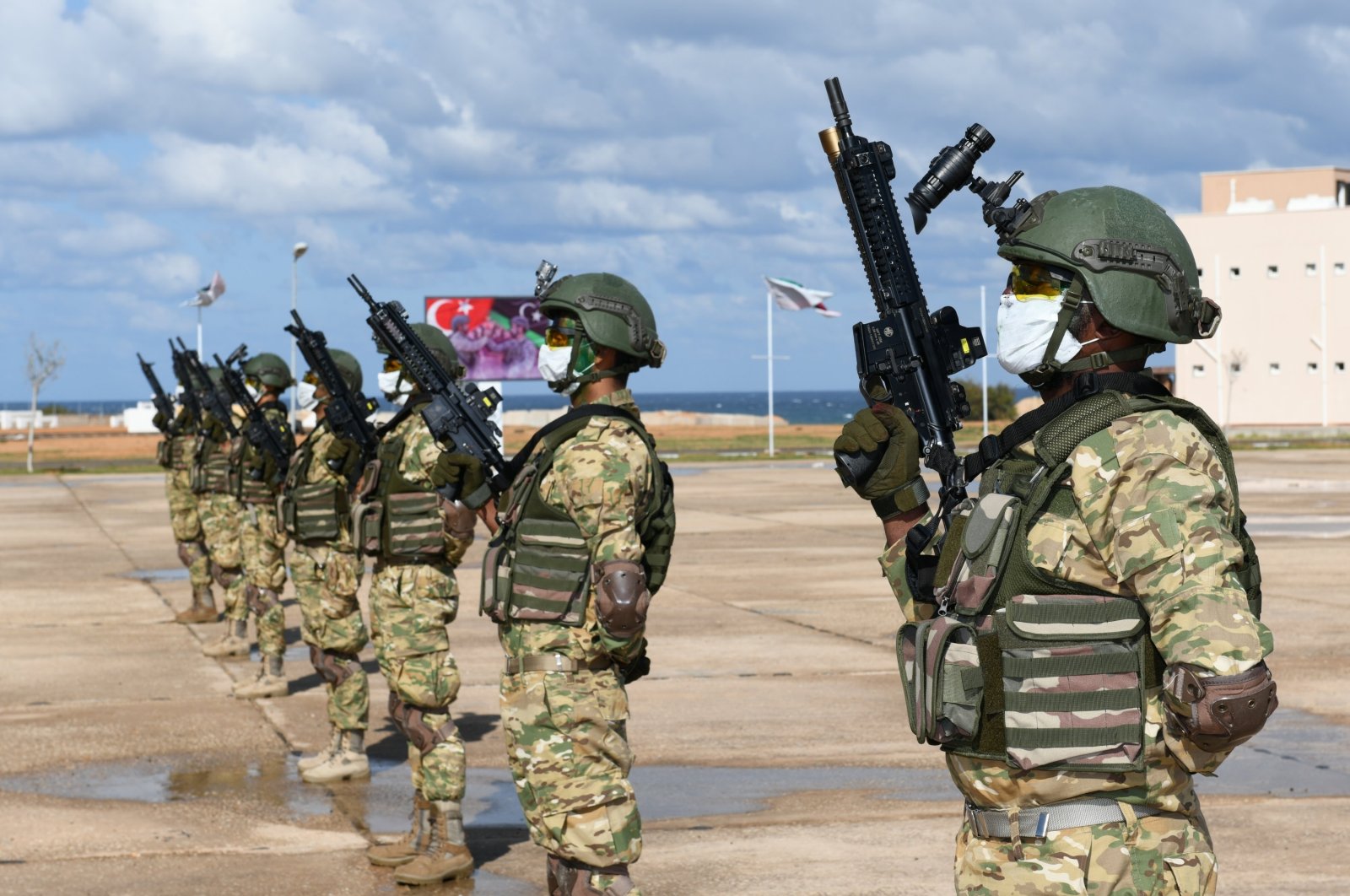 Libyan soldiers conduct a graduation ceremony in the Libyan capital Tripoli following the completion of training by the Turkish Armed Forces (TSK), Nov. 22, 2020. (AA Photo)
by Daily Sabah with AA Nov 29, 2020 11:51 am

As a security deal inked between Ankara and Tripoli marked its first anniversary, Turkish soldiers continue to help the Libyan Army professionalize

The Turkish Armed Forces (TSK) continues to provide military training, humanitarian aid and consultancy for the Libyan Army as a memorandum of understanding (MoU) between Turkey and Libya marked its first anniversary on Nov. 27.

TSK personnel, who are in Libya on the official invitation of the U.N.-recognized Government of National Accord (GNA), have been providing support to hundreds of Libyan military students in various capacities.

The inadequacy of state institutions, especially the lack of a modern and professional army, that emerged after the collapse of Moammar Gadhafi's regime during the Arab Spring, are considered the main reasons behind many of Libya's recent troubles.

The MoU involves technical information, support, development, maintenance, repair, planning and material support, training and consultancy services regarding the use of weapons systems and equipment.

It covers joint military exercises, the security and defense industry, counterterrorism, illegal migration, the security of land, sea and air borders, narco-terrorism, anti-smuggling, operations on improvised explosives and natural disasters, conducting joint operations as well as the organizational structure of the defense and security forces.

Turkey’s Defense Ministry in a weekly briefing on Sunday also stated that the Turkish presence in Libya is based on the invitation of the legitimate U.N.-recognized GNA and the security agreement signed between the two parties last year.

As part of the deal, Turkish soldiers continue to provide military training and consultation in coordination with their efforts to help the Libyan Army to professionalize and reach international standards with ongoing education in five training centers, it added.

Stating that 2,301 personnel have completed their training including the use of air defense systems, mortar use, the annihilation of mines and improvised explosives and the training of officers and 264 personnel are still participating in the training, the statement reiterated that Turkey will continue to side with the Libyan people based on the understanding that “Libya belongs to Libyans.”

Libyan Defense Minister Salahaddin Namroush told Anadolu Agency (AA) Saturday that the Turkish army, as a NATO member, has valuable experience that could be transferred to Libya so it can establish a professional army that meets NATO standards.

Speaking to AA, Abdulhadi Dirah, spokesperson for the army's Sirte-Jufra Joint Operations Unit, also said Saturday: "Thanks to the military support and cooperation of our Turkish brothers under the agreement, the Libyan Army succeeded in removing Haftar's forces from the western region."

"The Libyan government called on the international community, the U.N., the U.S., Europe and neighboring countries to help the country in times of crisis. Turkey, however, was the only country that provided military assistance to us," Mohammed Ali Abdallah, political advisor for U.S. affairs to Libya's prime minister, told AA.

As part of the deal and at the request of the Libyan government, TSK teams have continued their efforts to clear mines planted by militias of putschist Gen. Khalifa Haftar in settlements in the south of Tripoli.

Bomb disposal experts of the Turkish Army, along with the Libyan Army, conduct work on the ground with modern equipment, robotic systems, national technologies and equipment. The equipment, including bomb disposal robots and detectors used to clear mines and bombs, are produced in Turkey.

The two countries continue to cooperate in an effort to return life to normal by clearing explosives and mines in the region.

The first batch of soldiers to successfully complete the Turkish military training program graduated last week at a ceremony held in Tripoli.

Turkey is a longtime supporter of Libya's GNA, established in late 2015 under an agreement for a political solution in the country, the same government which the U.N. has recognized as Libya's legitimate administration since the day it began.

Despite this agreement, some European and regional countries supported the attacks launched by Haftar, the leader of illegitimate militias in Libya, to seize the capital Tripoli in April 2019, while most international actors remained silent in the face of the putschist general's attacks.

Nevertheless, the two pacts with Turkey shifted the balance in the country in favor of the legitimate government.

Turkey's support for the war-torn country prevented it from plunging into further conflict and paved the way for the U.N.-led political solution process between the warring parties.

Turkey announced its support for U.N.-led talks in Geneva on Oct. 19-23 which resulted in a declaration of a cease-fire, as it supported the talks in Istanbul and Moscow.

As statements from the Ministry of National Defense underscore, the ground for a political solution was created by virtue of Turkey's support to Libya.

The statements by Turkey's Defense Ministry also emphasize that Ankara continues to support the country's territorial integrity, a sustainable cease-fire and ensuring lasting peace and stability in Libya.

Participants at the forum agreed on the scope, duties and powers of the Presidential Council, which will be composed of three members, each of whom will represent Libya's three regions.

Likewise, an agreement was reached on the powers and duties of the government that will undertake the executive power.

A total of 75 people selected by the U.N. to represent different regions of Libya attended the forum in the Tunisian capital Tunis.