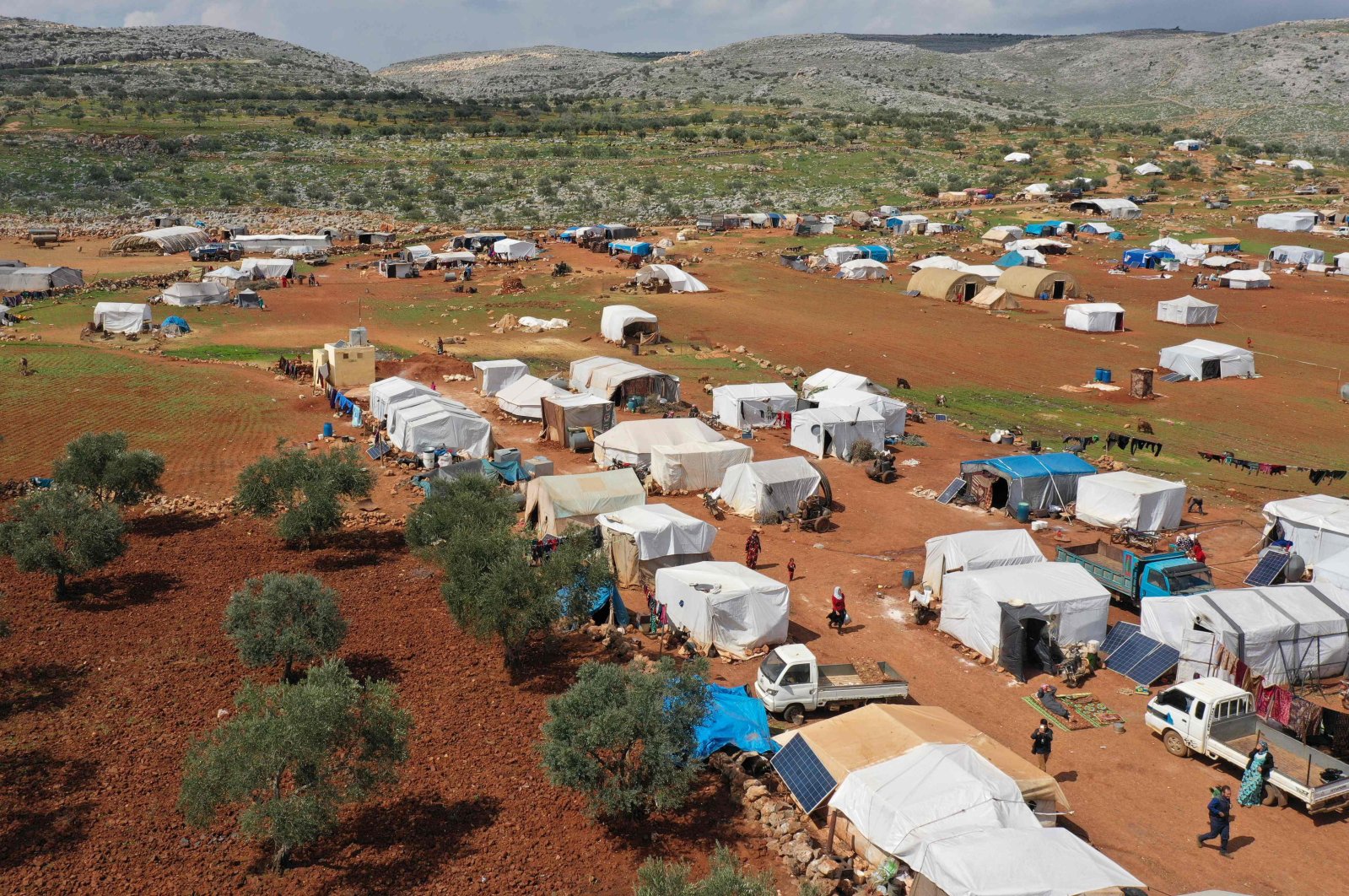 A drone image shows a displaced camp in the town of Kafr Uruq southwest of the town of Sarmada in Syria's northwestern Idlib province, Tuesday, March 17, 2020. (AFP Photo)
by DAILY SABAH Mar 19, 2020 11:04 am
RECOMMENDED

European leaders have welcomed the recent cease-fire in Idlib and condemned the Bashar Assad regime and its backers for causing the ongoing humanitarian crisis and mass displacement of people from and within Syria, a U.K. Prime Ministry spokesperson told Daily Sabah.

“The leaders agreed that concerted multilateral action was essential to support the global health response and mitigate the economic impact of the coronavirus. This follows the prime minister’s call with G7 leaders to coordinate the international response to the pandemic.” the Downing Street spokesperson said.

“The U.K. remains a leading donor to the humanitarian response in Syria and the region – providing 3.1 billion pounds ($3.58 billion) in lifesaving aid,” the statement added.

The four leaders also discussed the refugee crisis and the situation in Syria's opposition enclave of Idlib during a four-way video conference Tuesday, following Ankara's decision last month to open its border to refugees and migrants trying to reach Europe.

The move sparked tensions with Brussels and with neighboring Greece when thousands of asylum-seekers, refugees and migrants amassed on the Turkish-Greek border.

"Humanitarian assistance for Idlib and the refugee issue" were on the agenda, according to the Turkish presidency, along with other issues such as fighting in Libya.

"We found an opportunity to extensively evaluate many topics ranging from the fight against coronavirus and the humanitarian situation in (Syria's) Idlib, to solutions to Syria crisis, the matter of asylum seekers and Turkey-EU relations at the summit," Erdoğan said on Twitter following the summit.

"In this difficult process that we pass through at the regional and global level, we will operate diplomacy and cooperation mechanisms more actively, and we will resolutely continue our efforts to resolve problems as soon as possible," he added.

In another statement, Merkel pledged support for refugees in Idlib and underlined the need for a sustainable cease-fire and a political solution to the conflict in Syria.

Merkel said the leaders also discussed the migration issues and the 2016 EU-Turkey migrant agreement during the video conference call.

"We have expressed our willingness to offer more financial support if necessary," she said, adding that they were also aware of Ankara's expectations for upgrading the EU-Turkey customs union.

The EU-Turkey agreement has been successful in stemming refugee flows in recent years, but the EU's reluctance to take in refugees from Turkey and bureaucratic hurdles in transferring promised funds for refugees have led to sharp criticism from Turkish politicians.

Ankara also criticized its European partners for not fully implementing the 2016 agreement and backing away from their political commitments, including negotiations on upgrading the customs union.

Macron's office said there was a convergence of views on the situation in Idlib and the need to step up humanitarian aid to civilians during the conference that lasted about an hour.

But on the migrant issue, NATO and EU relations, "a number of clarifications have been requested by Europeans from Erdoğan in order to achieve clearer and peaceful relations," the Elysee Palace said.

Turkey's decision to open the gates for refugees heading to Europe came after more than 50 Turkish troops were killed by Syrian regime fire in the northwestern province of Idlib in February.

Turkey is home to nearly 3.7 million Syrian refugees and is demanding more assistance from the EU amid fears of another influx from Idlib, where the Syrian regime has launched an offensive backed by Russian airpower. Ankara says it cannot absorb another refugee wave.

Ankara hopes for progress on a new migrant deal with Brussels by the next scheduled EU summit on March 26.

The summit was previously planned to be held in Istanbul but was held via video conference as part of measures taken to stem the spread of the novel coronavirus.

Since first being detected in Wuhan, China in December, the novel coronavirus has claimed more than 8,982 lives globally, according to the World Health Organization (WHO).

More than 194,000 cases of the virus have been confirmed in at least 164 countries and territories, with Europe as the new epicenter of the pandemic, according to the WHO.