by DAILY SABAH WITH REUTERS 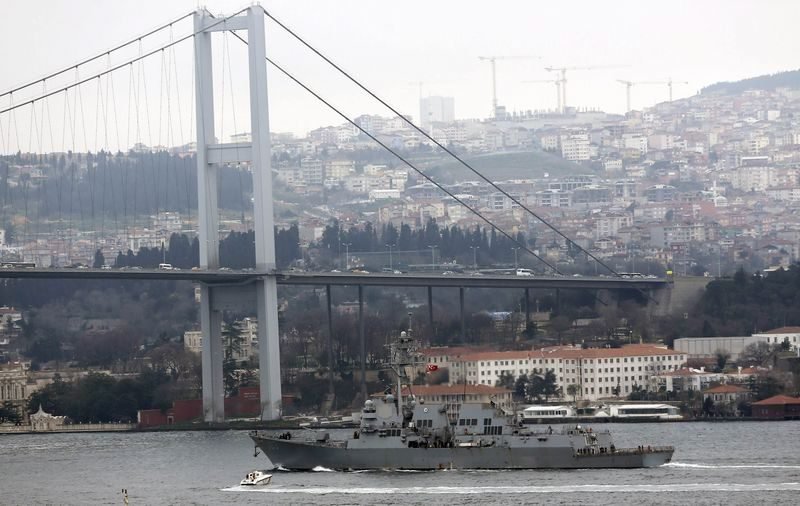 U.S. Navy guided-missile destroyer USS Truxtun passes under the Bosporus bridge in Istanbul, on its way to the Black Sea, Turkey, March 7, 2014. (Reuters Photo)
by DAILY SABAH WITH REUTERS Feb 24, 2022 10:36 am
RECOMMENDED

Ukraine has asked Turkey to close the Bosporus and Dardanelles straits to Russian ships, Ukraine's ambassador to Ankara said on Thursday, after Russia launched air and ground assaults on its neighbor.

The ambassador said his country expected solidarity from NATO member Turkey and that it should not remain impartial after Russia launched an offensive.

Speaking to reporters after holding talks at the Turkish Foreign Ministry, Ambassador Vasyl Bodnar said Turkey will evaluate a Ukrainian request to close the Bosphorus and Dardanelles straits to Russian ships.

The request puts NATO member Turkey, which shares a maritime border with Ukraine and Russia in the Black Sea and has good relations with both countries, in a difficult position. Under a 1936 pact, Ankara has control over the straits and can limit warship passages during wartime or if threatened.

"We are calling for the air space, Bosporus and Dardanelles straits to be closed. We have conveyed our relevant demand to the Turkish side. At the same time, we want sanctions imposed on the Russian side. Particularly, we demand the seizure of the shares of the Russian business world here," Bodnar told a news conference in Ankara.

He underlined the importance of providing defense weapons, as well as financial and humanitarian assistance.

"We also call for support to the citizens of Ukraine currently in Turkey, especially those who need additional protection and security," he added.

He stressed that this is the first time in the region that a nuclear-armed country has launched an "open attack" on another independent country and "started a war."

He said Russia was attacking Ukraine on all fronts, including the borders with Crimea and Belarus as well as the eastern Donbas region.

"The Ukrainian armed forces and our regional security units are fighting against the Russian invaders," he said.

Ukraine has declared martial law, he said, adding that they have decided to end diplomatic relations with Russia.

"We call on the whole world to form a coalition against (Russian President Vladimir) Putin and to prevent the expansion of the war, especially in this region. All masks have now been taken down and we are now at war," he said.

"We hope that all Turkish people will support Ukraine in this just cause," he added.

According to reports, Russia is using weapons and missiles to target key areas in Ukrainian cities.

Early in the day, explosions were reported in several Ukrainian provinces, including the capital Kyiv, and tanks were reported to have crossed the border from Belarus into Ukraine.

Russia had amassed over 100,000 troops around Ukraine in recent months, but Putin denied any intention of invading.

Turkey has opposed sanctions on Russia. President Recep Tayyip Erdoğan has said Ankara would try managing the crisis without abandoning ties with either Moscow or Kyiv, but has also called Russian steps against Ukraine unacceptable, while also offering to mediate.

While building close cooperation with Russia on defense and energy, Ankara has also sold sophisticated drones to Ukraine and signed a deal to co-produce more, angering Moscow.

Turkey opposes Russian policies in Syria and Libya, its annexation of Crimea in 2014 and its 2008 recognition of two Georgian regions.

Under the 1936 Montreux Convention, NATO member Turkey has control over the Bosporus and Dardanelles straits, linking the Mediterranean and Black seas. The pact gives Ankara the power to regulate the transit of naval warships and to close the straits to foreign warships during wartime and when it is threatened.

Erdoğan said Wednesday that Turkey, which has good ties with both Ukraine and Russia, could not abandon its ties with either country and that it would take steps to ensure relations remain intact.

"It is not possible for us to abandon either (country)," he said and called on both Ukraine and Russia to resume negotiations, while urging NATO to "determine its stance" and "do whatever it will" after a summit on Wednesday.

"Our aim is that we take such a step that, God willing, we sort this out without abandoning either one."

Erdoğan cut short a trip to Africa amid the flurry of diplomacy over the crisis and returned to Turkey late on Tuesday.

He has proposed a trilateral summit in Turkey with Russian counterpart Vladimir Putin and Ukrainian President Volodymyr Zelenskyy.

In a call, Erdoğan told Putin that military conflict in the region would not benefit anyone and repeated his offer to help solve the crisis, his office said in a statement, adding Erdoğan said he valued Putin's close cooperation on regional issues and wanted to continue this.

"President Erdoğan, who renewed his call for the matter to be resolved through dialogue, stated that it was important to bring diplomacy to the forefront, and that (Turkey) continued its constructive stance in NATO as well."

"Turkey is ready to do its part to reduce tensions and maintain peace," he told Putin.

Putin expressed disappointment to Erdoğan at what he said were attempts by Washington and NATO to ignore Russia's security demands, Interfax cited the Kremlin as saying.

On Thursday, the Turkish Foreign Ministry also said that it would provide necessary support and guidance to citizens wishing to leave Ukraine.

The ministry also advised Turkish citizens to stay at home or in a safe place and avoid traveling.

Earlier on Thursday, flag carrier Turkish Airlines (THY) said it canceled all flights to Ukraine on Feb. 24 because of the closure of Ukrainian air space.