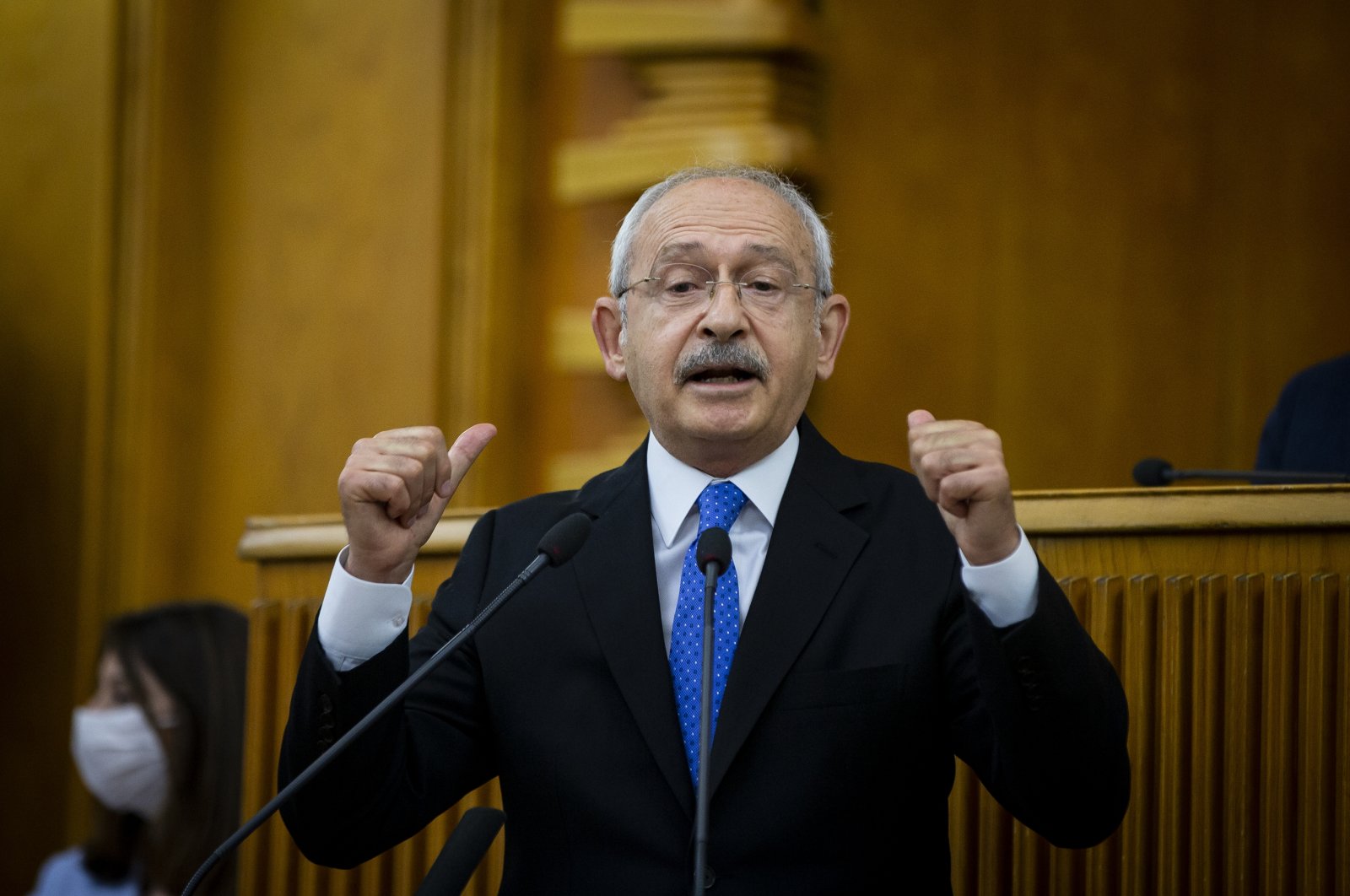 One of the most controversial congressional sessions of the main opposition Republican People’s Party (CHP) is near as intraparty competition flares and voices of criticism toward its chairman become louder.

The ordinary congress is set for July 25-26 and will take place at Bilkent University's Odeon exhibition center as it has a semi-open structure, deemed a safer spot than a fully enclosed venue as the coronavirus pandemic continues. On the first day of the congress, CHP's next chairman will be elected, and on the second day, 60 party caucus members will be chosen.

While many prominent members have voiced that they will not be attending the session, the party’s chairman, Kemal Kılıçdaroğlu, is being challenged by at least three rivals – all seeking significant change and the rise of the party.

Takvim daily Ankara representative Zafer Şahin told Daily Sabah that disintegration will take place within the party after the much-discussed ordinary congress, while he indicated that the establishment of a new party is also among the issues being discussed. “The possibility that a similar scenario to that of the 1990s when the SHP (Social Democratic Populist Party), the DSP (Democratic Left Party) and the CHP existed once again emerged,” Şahin stated.

He also pointed out that the CHP closed a chapter in its history and is aiming for former President Abdullah Gül or the head of the recently established Democracy and Progress Party (DEVA), former deputy prime minister Ali Babacan, to become a presidential candidate.

On the other side, journalist Mahmut Övür argued that no significant changes are to be expected from the congress.

“It will be a congress at the axis and under the initiative of Kılıçdaroğlu, imposed on the CHP,” Övür indicated.

Saying that he did not expect vital changes to the party’s cadre, Övür added, “The congress is dubbed the congress for ruling and power; however, there are no signs or indicators that the CHP is on a path to be the ruling party.”

“The main controversy during the congress will be focused on the election of the caucus members,” Övür continued, elaborating that these members influence the policies of the party and that the major competition will take place in this regard. He further expressed that being a member has been rendered more difficult, while the party’s chairman primarily determines the names.

A significant base within the party and dissident of the current chairman has heavily criticized Kılıçdaroğlu and the party’s conduct ahead of congress while stressing that the congress's process has led to a fait accompli.

Dissidents have long been criticizing Kılıçdaroğlu for pursuing a low-profile and weak opposition against the government and undermining the CHP’s fundamental republican values. Prominent figures have also slammed Kılıçdaroğlu for failing to step down even though he has never won a single election in almost a decade.

Kılıçdaroğlu has been serving as the head of the main opposition party since 2010. He took office during the 33rd ordinary congress, held after the resignation of former Chairman Deniz Baykal.

The last ordinary meeting was held between Feb. 3-4, 2018, with Kılıçdaroğlu elected as chairman for the fourth time. Kılıçdaroğlu then was rivaled by Muharrem Ince, CHP’s Yalova deputy, and won with 790 votes, while Ince only gathered 447. If elected, the upcoming congress will guarantee Kılıçdaroğlu’s fifth term at the helm of the party's leadership.

Ince, who went on to run for the CHP in 2018 presidential elections and fared batter than his party with 30% of the votes, has been especially critical of Kılıçdaroğlu and has reiterated that the party needs a fresh start, frequently voicing that the CHP will not be able to engage in ethical politics in Turkey if the party does not break its chains and start a cleansing process.

Regarding the role of Ince during the congress, Şahin stated that he will not be a candidate during the congress but rather a focus for the presidential elections, while Övür expressed that Ince has no chance since he does not present a vital change of policy and was long defamed by Kılıçdaroğlu.

“Kılıçdaroğlu pursues a subtle strategy that CHP members are not aware of and eliminates those being a threat to his position,” Övür added.

The first party figure that announced his candidacy was a former deputy from southern Mersin province, Aytuğ Atıcı.

Atıcı was harsh against Kılıçdaroğlu in his candidacy bid, saying: “Our party, which managed to garner 25.9% of the votes in the 2011 elections, dropped down to 22.9% in 2018.” He added that measures needed to be implemented to guard against the party’s decreasing popularity.

“We must respond to this decrease with alarm and take precautions,” Atıcı said, calling on Kılıçdaroğlu to take things seriously and not count on the party’s success in the 2019 local elections, when it won against the ruling Justice and Development Party’s (AK Party) candidates in many prominent provinces, including Istanbul, Ankara and Antalya.

Atıcı is a Turkish academician and a professor of medicine. He is also a human rights and environmental activist who has been elected as a CHP deputy from Mersin three times.

An honorary member of the CHP party congress, Tolga Yarman, has also announced his candidacy for chairman. Yarman is a physics professor with a prominent academic background. His fields of interest include nuclear science, quantum mechanics, thermodynamics, cosmology and gravitation. He is considered to be one of the members of the CHP elite.

“The CHP chairmanship has the potential to change the planet,” CHP Party Caucus member Ilhan Cihaner said in a statement early Thursday, announcing his candidacy.

“We are first willing to change our party and then the world,” he added.

“The role of our party is that of a 'savior and founder.' Because of this role, we have the potential to define the country we live in, in terms of how it does – and doesn't – operate,” Cihaner added, later clarifying his criticism of the current administration of the party.

“Our first criticism is that our party fails to utilize its human resources and its historical abilities to its fullest extent. Also, I would like to emphasize that the ongoing pandemic is an obstacle to realizing our ordinary congress in fruitful and democratic conditions,” he said.

“A congress without the attendance of honorary members and party members will not be able to bring a potential ruling party’s dynamism to our party organization,” Cihaner said, noting that they would nevertheless try their best.

“But still, the duty that lies upon us is to try to bring the conference to fruition in line with its historical importance,” he said.

“What will our main political path be? How will the democratic will our party’s inner workings be? We will try our best to put these questions in perspective in the congress,” he said.

“The CHP needs to stop looking to the past and instead build our future. Our party is needed for peace at home and around the world, for people of all ethnicities, children, women, elderly, disabled, LGBT individuals and for those of all religious beliefs and creeds, for all people of all identities and for all to live together in peace, based upon the principle of secularity, which they need to live equally,” Cihaner said.

Explaining that the CHP continued its struggle with Parliament during the founding of the Republic of Turkey under the leadership of Mustafa Kemal Atatürk, Cihaner added that the party caucus should be the strongest institution within the party.

“That being the case, the party caucus should the strongest managing body in the CHP. We need representatives selected by party members, not by the chairman,” he said, criticizing current CHP head Kılıçdaroğlu.

“We need a people’s party, not a chairman’s. We don't need deputies who abide by the decisions made by the chairman, but a Central Executive Committee and a party caucus where members, delegates and deputies alike contribute to the decision-making processes,” Cihaner added.

“That’s why I’ve become a candidate for chair, as someone who aims to make those principles our party’s bylaws,” he concluded.