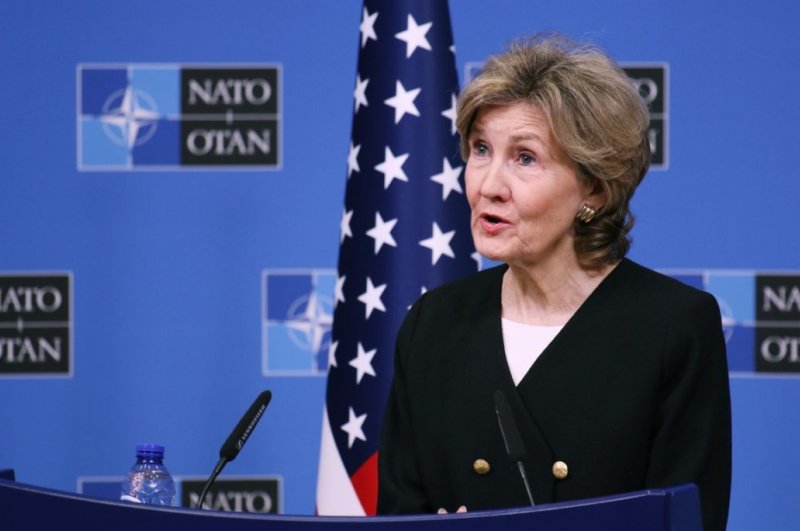 U.S. Permanent Representative to NATO Kay Bailey Hutchison said early Friday that everything is on the table regarding possible American support for Turkey after 33 Turkish soldiers were killed by the Assad regime in Syria’s war-ravaged Idlib.

“What about – is there more – a larger role for the U.S. to come to Turkey’s defense in northwest Syria? Is there a larger role that the U.S. should or could be playing now?” the reporter asked.

“Turkey is our ally. We are on the same side in many areas, but in Syria especially, we are concerned about the whole – what Assad is doing, attacking Idlib, the people in Idlib again. This is going to be a refugee crisis, a humanitarian crisis, because these people have nowhere to go, and they will try to go into Turkey, but these people are – we’ve called on Russia, we’ve called on Syria, but the Turks are the ones that are trying to keep Assad from really attacking these people again,” Hutchison added.

When asked about the possibility of military, surveillance or intelligence support by the U.S., she said that the situation is complex and the issue is being discussed.

“It’s definitely being discussed. It’s a – it’s very hard – a very – it’s a complicated situation. It is being discussed just like it’s being discussed here in the bilateral as well. And I would say that it’s important that we stand against Russia and Syria – the Syrian regime, Assad – and there’s been no decision that I’m aware of about what exactly has been asked or what might be given. But it’s a tense situation and one that we are definitely discussing,” she said.

Some 33 Turkish soldiers were killed and 32 others were injured in a Russia-backed Assad regime airstrike in northwestern Syria's Idlib Thursday, confirmed Hatay Gov. Rahmi Doğan.

Gov. Doğan initially confirmed the death toll as nine but later increased the number to 22, 29 and eventually 33. Some 32 more wounded Turkish soldiers are in stable condition and are being treated in hospitals, he added.

With the attack, the growing alarm in Ankara over the recent escalation of tensions reached a tipping point.

Security sources told Daily Sabah that all ministers and senior officials, including the National Intelligence Organization (MİT) chief Hakan Fidan, were present in the meeting that started at 9:30 p.m. and lasted nearly six hours.

"We are hitting, with land and air backup, all known regime targets, and will continue to do so. We'll continue our operations in Syria until the hands that attacked our flag is dealt with," Presidential Communications Director Fahrettin Altun said.

In retaliation, Turkish artillery pounded Assad regime targets along the frontline in Idlib. Turkey also carried out missile attacks on targets in Syria's central Hama, northwestern towns of Nubl and Zahraa, as well as in regime and Russian bastion, Latakia.