US special envoy Jeffrey arrives in Turkey for Syria talks 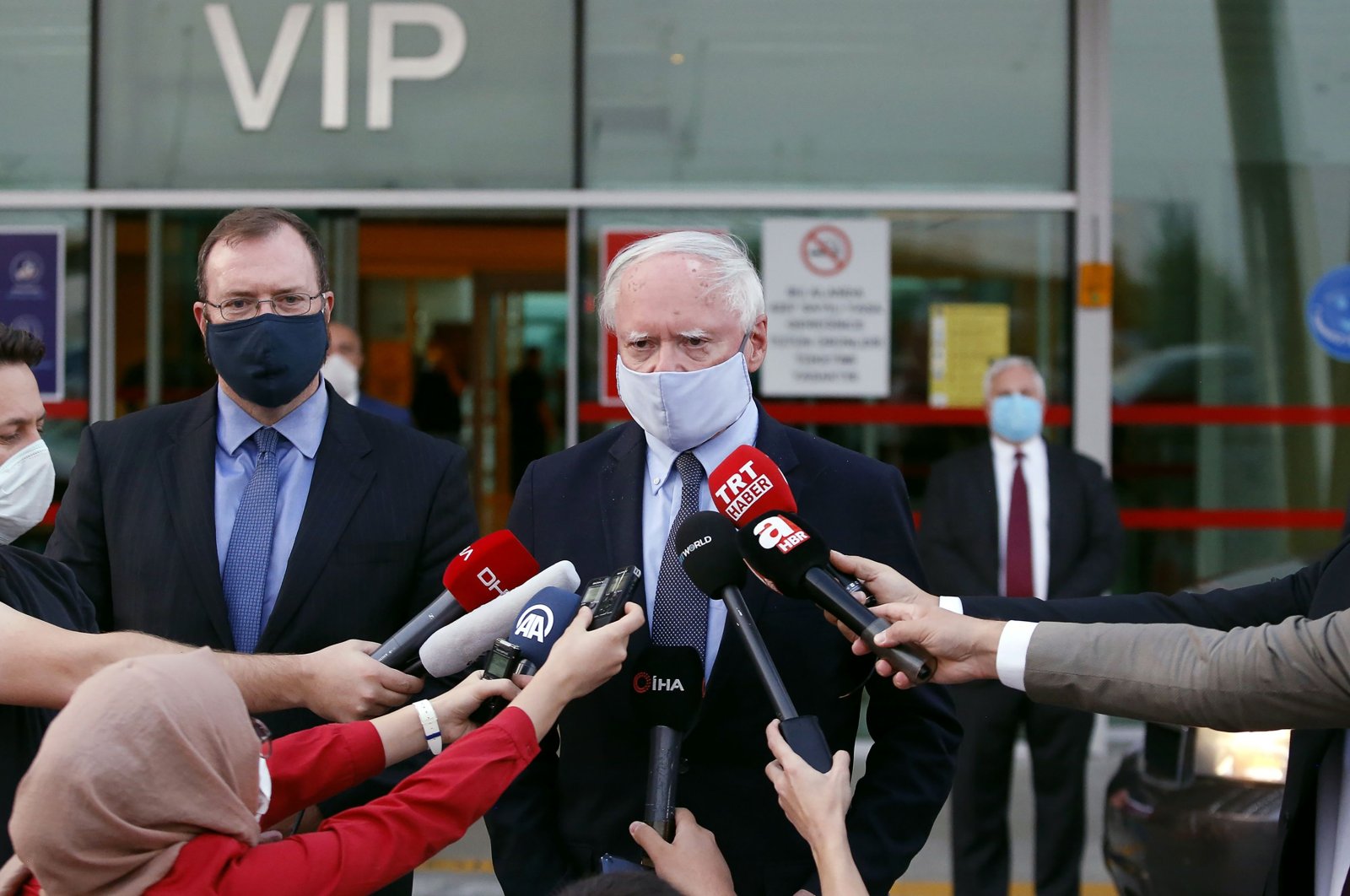 "We have exciting developments on the Syrian account," Jeffrey told reporters at the airport.

"The military phase of this conflict needs to end. There is no more ground to be gained by the regime. The regime needs to return to the negotiating table and deal with the rest of the international community. That's our priority," he said, adding that he would discuss these issues with Turkish officials during his visit.

The U.N.-mediated talks involving the Syrian regime, opposition and civil society envoys were put “on hold” after three participants turned up positive for COVID-19 just hours after the face-to-face meetings started in Geneva on Monday.

Jeffrey said that though the coronavirus test results of some members are still pending, he was hopeful that the body would continue progress on the political path.

The office of U.N. Syria envoy Geir Pedersen said the three delegations had gotten off to a “constructive first meeting” before the talks were suspended and that they were discussing a possible new constitution for the war-battered country – a step he called a prospective “door-opener” to a final resolution of the country’s devastating nine-year civil war.

The constitutional review is a central part of the United Nations' peace plan for Syria, which was defined by Security Council Resolution 2254, adopted in December 2015.

President Recep Tayyip Erdoğan said Tuesday that the U.S. had sided with terrorist organizations instead of its NATO ally Turkey. Referring to Erdoğan's remarks, Jeffrey said the U.S. is "a close ally of Turkey. We proved our value in many fields outside of Syria."

Washington has allied itself with the PKK terror group’s Syrian branch YPG in their fight against Daesh during the Syrian conflict despite concerns and objections from its NATO ally Turkey. The PKK is recognized as a terror group by Turkey, the European Union and the U.S.

He reminded that on Oct. 17, 2019 – the ninth day of Turkey's cross-border anti-terror Peace Spring Operation – a U.S. delegation had arrived in Ankara and reached an agreement with Turkey on its efforts in northern Syria. "We are working to ensure that is maintained. We have very close coordination on Idlib and on the political process, and we will continue to do exactly what we're doing."

"Syria is a major security and geopolitical threat for its all neighbors, beginning with Turkey. Turkey must be at the table in any resolution of this conflict," he added.

Previously, the U.S. State Department had said Jeffrey would gather with senior Turkish officials in Ankara to discuss the implementation of U.N. Security Council Resolution 2254 for the resolution of the Syrian conflict, efforts to defeat Deash terror group and other forms of bilateral cooperation related to the stability of Syria and the region.

Jeffrey also met with Deputy Foreign Minister Sedat Önal on Wednesday, who held talks in Geneva, as part of the Syrian Constitutional Committee's third round of meetings.

During their meeting, Jeffrey and Önal discussed the political process in Syria, how to support the work of the Constitutional Committee, the situation in Idlib and the maintenance of the cease-fire in the field.

Turkey and Russia, which back opposing sides in Syria's war, agreed on March 5 to halt military activity in the northwestern Idlib region after an escalation of violence displaced nearly 1 million people and brought the two sides close to confrontation. The deal addresses Turkey's main concerns, stopping a flow of refugees and preventing the deaths of more Turkish soldiers on the ground.

Idlib has long been under siege by the Bashar Assad regime's forces and its allies, and previous cease-fires for the region were plagued by violations. Since April 2018, attacks on the last opposition stronghold have dramatically intensified and caused new waves of refugees to move toward the Turkish border, putting Turkey, which already hosts 3.7 million Syrians, into a difficult position.