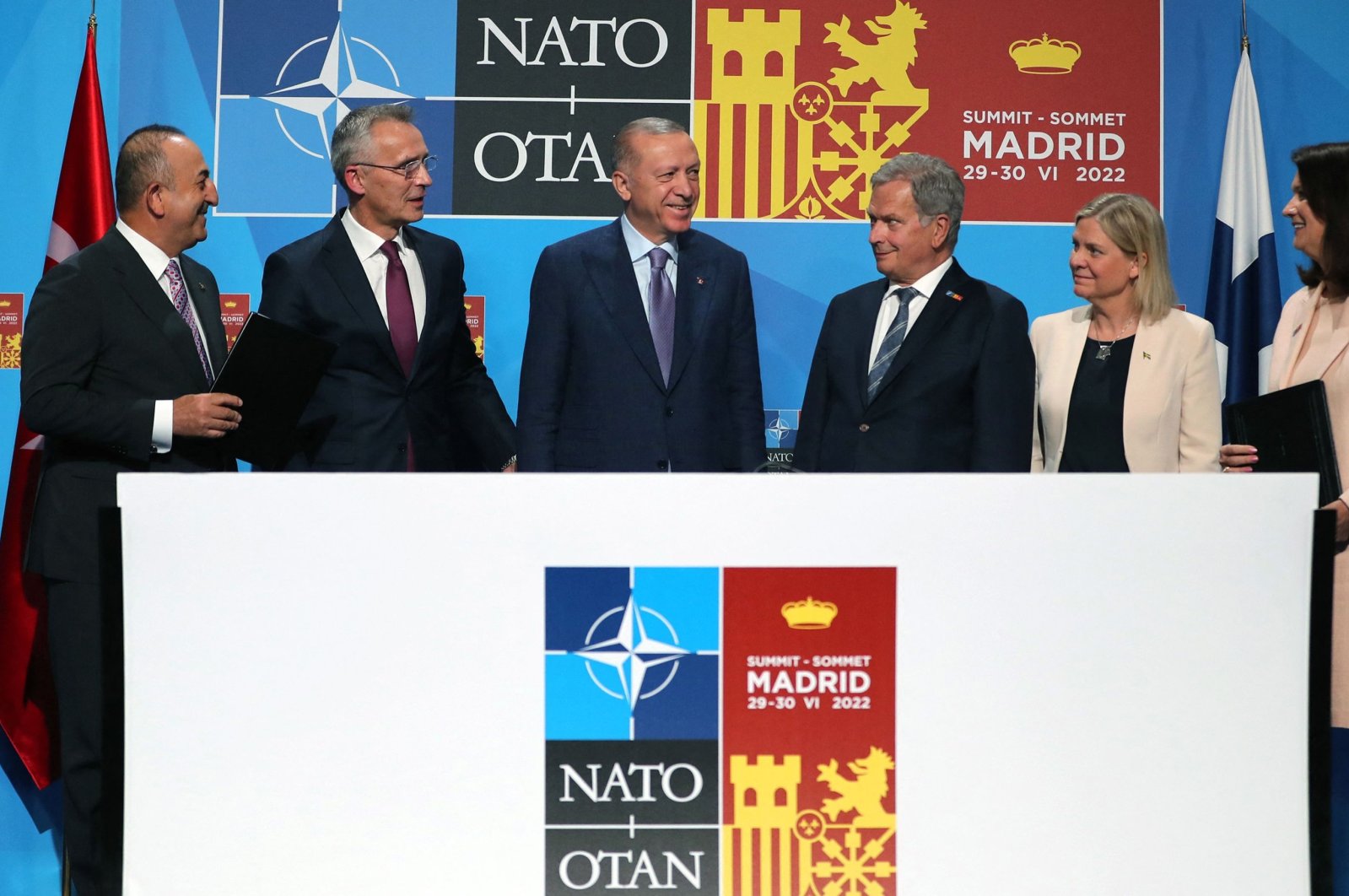 Not enforcing the memorandum costs much more than enforcing it, the chair of the Parliamentary Foreign Affairs Committee, Akif Çağatay Kılıç, said Sunday in reference to the NATO deal signed between Turkey, Sweden and Finland.

Kılıç stated that by applying for NATO membership due to the Russia-Ukraine war, Sweden and Finland changed their policy of neutrality, which they had maintained up until today, adding that the final stage of the diplomatic process set in motion was the signing of the memorandum at the NATO summit in Madrid.

A written statement was agreed upon in this context and the foreign ministers of Turkey, Sweden and Finland signed this memorandum of understanding, Kılıç explained, highlighting that the agreement put the PKK back on the agenda as it was recorded in the memorandum as a terrorist organization.

Kılıç pointed out that the memorandum clearly revealed Turkey's reservations, wishes and determination in the fight against terrorism while delivering the message that NATO allies stand by the country against existential threats.

Emphasizing that the signing of the memorandum does not mean Sweden and Finland can immediately start their NATO membership process, Kılıç said: "The negotiation process will continue for a while and will eventually be brought to parliaments. We are talking about a process that must pass through the parliaments of all NATO ally countries. The memorandum is the beginning of this work."

Kılıç underlined that by signing the memorandum, written commitments have been made. "If you don't keep these commitments, I'm sorry, they won't say you're a man of your word, nor can we trust you in any so-called agreement that we come up with. Not enforcing the memorandum costs much more than enforcing it. Because trust will be lost, your words will have no meaning. There is a process that begins in this sense. We will monitor whether the warranties given in writing are fulfilled within the framework of the agreement set forth at this point."

The accord signed with Finland and Sweden to lift Turkey’s veto on their NATO membership bids is not the end of the matter and obliges the Nordic states to keep their promises, President Recep Tayyip Erdoğan was cited as saying on Friday.

Speaking to reporters on a flight back from the critical NATO summit in Madrid, Erdoğan said there was no need to rush ratifying the bids in Parliament. Ankara should first see if Sweden and Finland keep the promises made under the memorandum, including on extraditing suspects sought by Turkey, he said.

“This should be known: These signatures don’t mean the issue is done ... Without our Parliament’s approval, this does not go into effect. So there is no need to rush,” Erdoğan said.

With the signing of the memorandum, Turkey lifted an objection to the Nordic countries’ NATO bid. In return, Finland and Sweden will address Turkey’s terrorism concerns.

Also speaking at a news conference in Madrid at the end of the NATO summit on Thursday, Erdoğan gave similar messages to the international audience.

Sweden and Finland must fulfill the promises made to Turkey in the deal regarding their NATO membership bids, including a pledge by Stockholm to extradite 73 “terrorists,” he said.

“We have strongly emphasized the message that we expect genuine solidarity from our allies, not only in words but also in action,” Erdoğan told reporters after the summit at which the Nordic countries were formally invited into the U.S.-led military bloc.

Their membership applications were held up until the last moment by Turkey, which sought guarantees that the Nordic countries would join Turkey’s fight against PKK-linked terrorists and swiftly extradite suspects. The dispute was resolved by a 10-point memorandum, signed on Tuesday, that appeared to address many of Turkey’s terrorism concerns and lift an arms embargo on Ankara imposed in response to Turkey’s 2019 military operation into Syria. But Erdoğan said he now expects the two countries to implement the deal in full.

Erdoğan told Sweden and Finland that he could still block their drives to join NATO if they fail to implement the new deal with Ankara.

Finland and Sweden must first keep the promises made to Turkey in the deal to lift its veto on their NATO membership bids, otherwise, ratification will not be sent to Parliament, Erdoğan said and added that the two Nordic countries must complete legislative changes regarding terrorists as soon as possible.

New countries’ membership applications must be approved by all NATO member states and ratified by the countries’ respective parliaments.

The deal also states that Finland and Sweden will work closely with Turkey on issues related to the exchange of information, extradition and, in general, the fight against terrorism.

After four hours of talks in Madrid on Tuesday, Erdoğan and his Finnish and Swedish counterparts agreed on a series of security measures to allow the two Nordic countries to overcome the Turkish veto.

According to the signed memorandum, Finland and Sweden pledged not to support the PKK/YPG or FETÖ, led by U.S.-based Fetullah Gülen, which orchestrated a 2016 coup attempt. The signed memorandum did not list any individuals for extradition. Ratification in allied parliaments is likely to take up to a year, but once it is done, Finland and Sweden will be covered by NATO’s Article 5 collective defense clause, putting them under the United States’ protective nuclear umbrella.