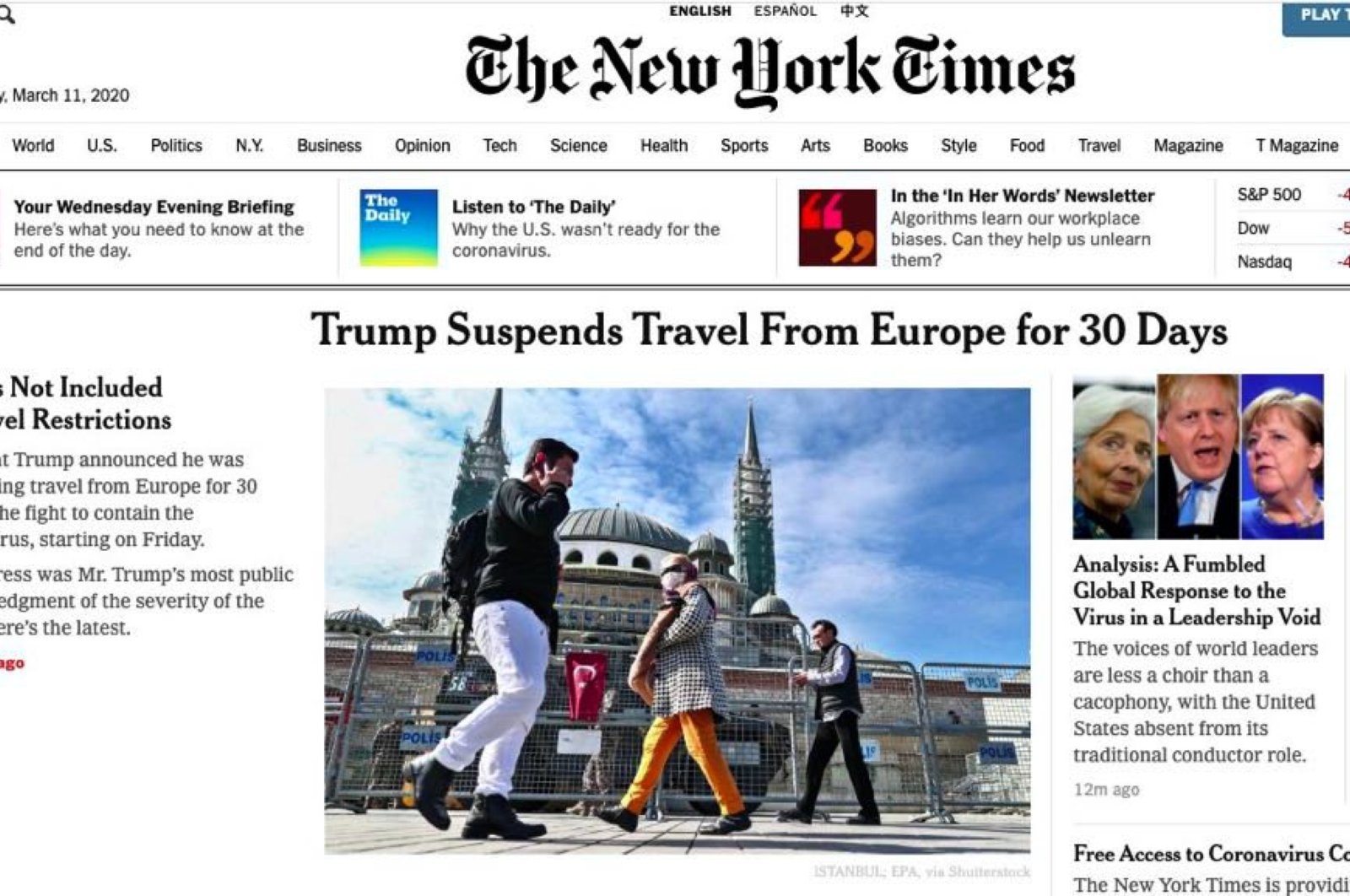 Although Turkey was exempted from the U.S.' 30-day ban on all flights from Europe due to the coronavirus threat, several Western media outlets, including The New York Times, BBC and CNN International, opted to use images from Turkey's cultural and commercial capital Istanbul with their news stories about developments on the issue. Given that Turkey was not even included in the ban, the selection of photos triggered suspicion of an anti-Turkey bias or agenda adopted by Western media outlets.

The Western media, especially in the U.S., is also generally known approaching Turkey as a Middle Eastern country, ignoring the country's European elements. However, their preference for photos from Turkey to represent Europe with news about the continent increased suspicions of a "mistake on purpose."

Especially in The New York Times' two articles about the latest developments, titled, "Trump suspends travel from Europe for 30 days" and "U.S. suspends most travel from Europe," photos from Istanbul were used, a move which has the potential of creating a negative perspective about Turkey among readers. Turkey, meanwhile, was not even included in the travel restriction and continues to be one of the safest places across the continent in terms of the coronavirus threat.

Releasing a Twitter message about the issue, Gülnur Aybet, senior adviser to the president of the Republic of Turkey, said: "The U.S. bans flights from Europe due to coronavirus. Turkey is not even included in the list of countries covered in that ban. But the photos under that headline are those from Turkey.. go figure.. oh and in cases like this, we’re considered to be part of ‘Europe’.."

In another Twitter message, Industry and Technology Minister Mustafa Varank underlined the same point, adding, "This mindset should be quarantined like coronavirus."

He also attached two photos the newspaper published alongside its stories, of scenes inside and outside Istanbul mosques. One shows a member of the Istanbul's Municipality disinfecting the Kılıç Ali Paşa Mosque to prevent the spread of the COVID-19, and the other one shows people walking in front of the construction site for a mosque in Istanbul's main Taksim Square in Beyoğlu district.

CNN International used the same photo to cover the coronavirus crisis that deepens between the U.S. and Europe.

BBC also used an image from Turkey on its website in order to cover latest developments over the U.S. travel ban and the spreading cases of coronavirus.

Taking dramatic action, U.S. President Donald Trump announced Wednesday he is sharply restricting passenger travel from 26 European nations to the U.S. and moving to ease the economic cost of a viral pandemic that is roiling global financial markets and disrupting the daily lives of Americans.

Trump, in a rare Oval Office address to the nation, said the monthlong restriction on travel would begin late Friday, at midnight. After days of playing down the coronavirus threat, he blamed Europe for not acting quickly enough to address the "foreign virus” and claimed that U.S. clusters were "seeded” by European travelers.

"We made a lifesaving move with early action on China," Trump said. "Now we must take the same action with Europe.”

Trump said the restrictions won't apply to the U.K., and there would be exemptions for "Americans who have undergone appropriate screenings." He said the U.S. would monitor the situation to determine if travel could be reopened earlier.

Turkey will also be exempt from the restriction.

The virus originated in Wuhan, China last December and has since spread to more than 100 countries.

After months of successful containment of the COVID-19, Turkey has only confirmed a single case on the virus. On Wednesday, the health minister announced that the male patient, who recently returned from Europe, and his family are in good condition but still under quarantine.

The worldwide death toll from the virus is over 4,600, with more than 124,500 confirmed cases, according to the World Health Organization (WHO), which has declared the outbreak a global pandemic.