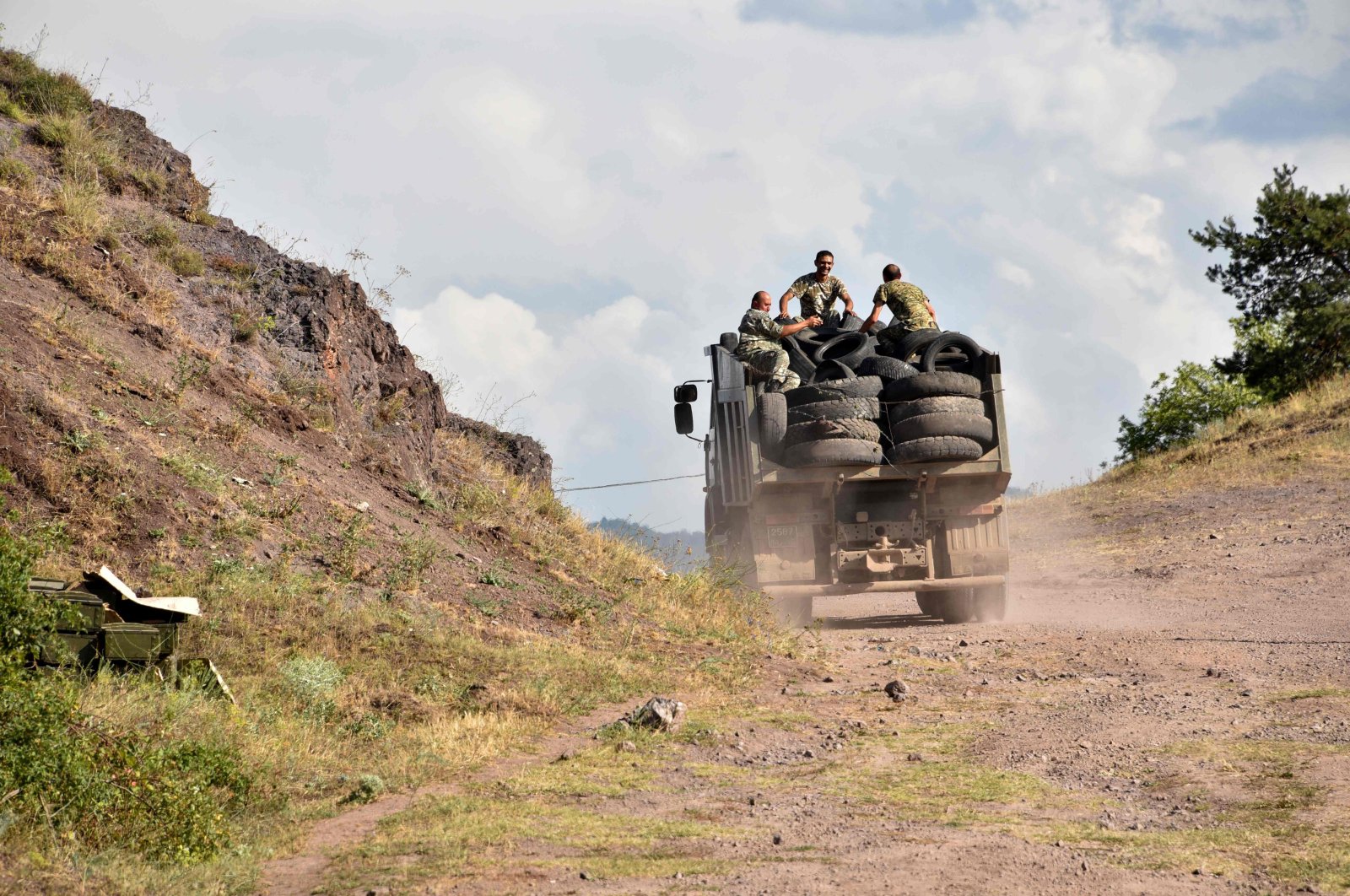 Armenian servicemen transport used tyres in the back of a truck to fortify their positions on the Armenian-Azerbaijani border near the village of Movses on July 15, 2020. (AFP File Photo)
by DAILY SABAH WITH AGENCIES Sep 27, 2020 11:17 pm
RECOMMENDED

Countries reacted against the recent eruption of fighting between Armenia and Azerbaijan in the occupied Nagorno-Karabakh region, as the U.S. and others urged both sides to halt fighting, while Iran said it could act as a mediator between them.

Fighting erupted anew Sunday between Armenian and Azerbaijani forces over the Armenian-occupied region of Nagorno-Karabakh and a top territorial official said 16 people were killed and more than 100 wounded, while Azerbaijan took control over some villages in the area.

Ankara reiterated its support to Azerbaijan in the face of Armenian aggression early Sunday, with many officials and the Turkish Foreign Ministry declaring unwavering backing to the brotherly Turkic nation. Turkish politicians from different political parties also pledged full support for Azerbaijan, as they urged Armenia to halt aggression.

The United States on Sunday joined global calls for Armenia and Azerbaijan to end the deadly clashes.

The U.S. State Department said it had contacted the two countries "to urge both sides to cease hostilities immediately, to use the existing direct communication links between them to avoid further escalation, and to avoid unhelpful rhetoric and actions."

Albanian Prime Minister Edi Rama, chairman of the Organization for Security and Cooperation in Europe, called on the sides to stop fighting. The long-unsuccessful negotiations for resolving the territory's status has been conducted under OSCE auspices.

Foreign Minister Javad Zarif of Iran, which borders both Azerbaijan and Armenia, said “We call for an immediate end to hostilities and urge dialogue to resolve differences. Our neighbors are our priority and we are ready to provide good offices to enable talks.”

Iran offered to act as mediator in the renewed conflict between the two neighboring states of Armenia and Azerbaijan over the disputed region of Nagorno-Karabakh.

"We call on both sides to exercise restraint, end the conflict immediately and resume negotiations," he said, while offering Tehran's support in working towards a resolution.

Tehran maintains good diplomatic relations with both states and has mediated in the conflict over Nagorno-Karabakh in the past.

Ukraine’s Foreign Ministry expressed deep concern about the escalation of conflict between the two countries.

“We examine circumstances that led to [the] escalation, call on the parties to return to the dialogue & settle the conflict by peaceful means. Our thoughts are with the relatives of victims," the ministry said on Twitter.

"Very concerned with the resumption of hostilities between Armenia and Azerbaijan. We call for peace. Stability and peace in our region must be our common cause," she said on her Twitter account.

U.N. Secretary-General Antonio Guterres said he was "extremely concerned over the fresh resumption of hostilities" between Armenia and Azerbaijan in the region.

"The Secretary-General strongly calls on the sides to immediately stop fighting, de-escalate tensions and return to meaningful negotiations without delay," Guterres's spokesman said in a statement.

Guterres "condemns the use of force and regrets the loss of life and the toll on the civilian population," the statement said, adding that the secretary-general would speak to the president of Azerbaijan and the prime minister of Armenia.

European Union and Council of Europe leaders were among the first to call on Armenia and Azerbaijan to immediately halt military action.