YPG/PKK does not have HQ in Moscow, Russian official says 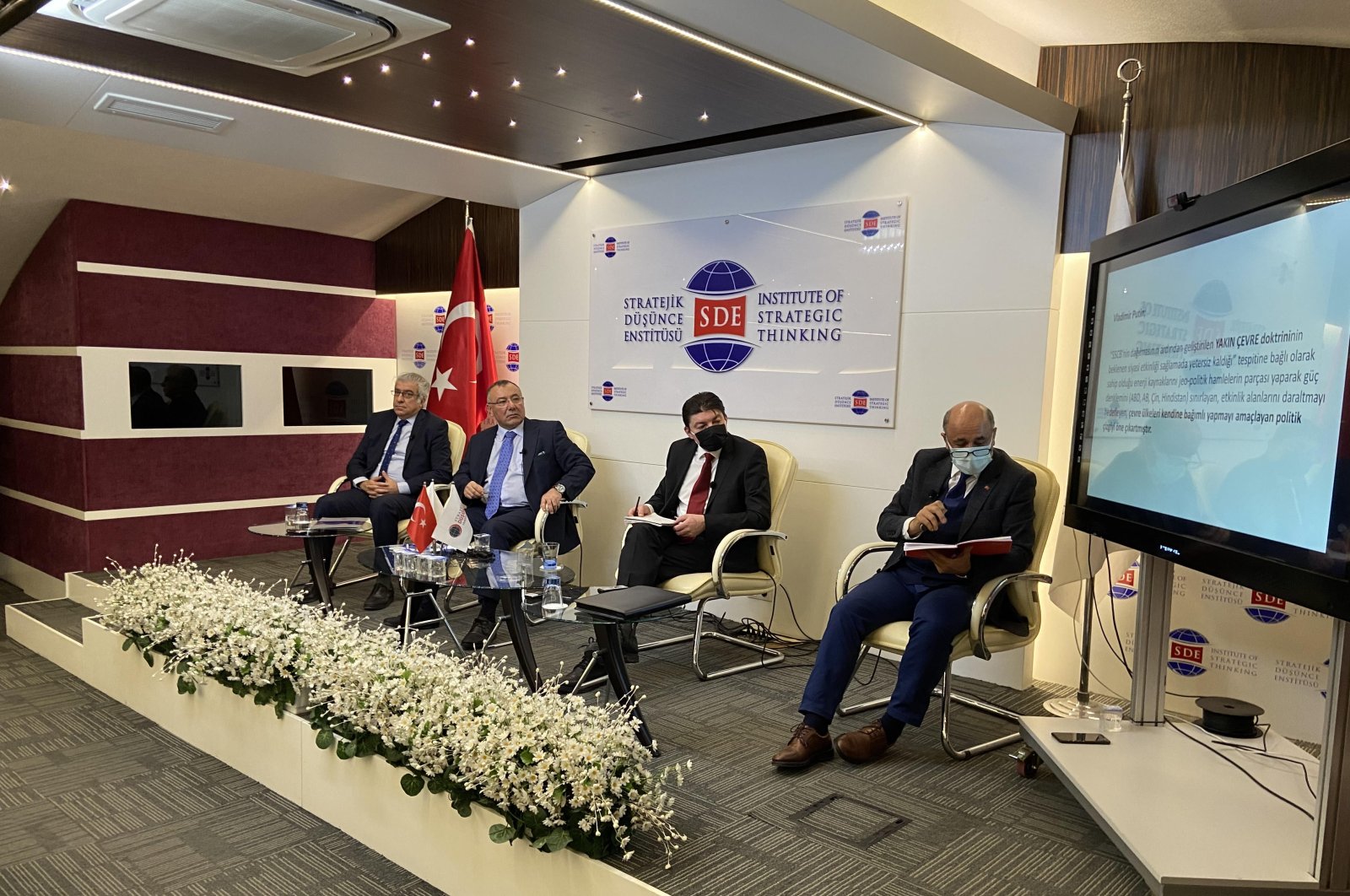 Russian Counselor Alexandr Sotnichenko speaks at the "Foreign Policy of Russia after the Cold War" panel at the Institute for Strategic Thinking (SDE), the capital Ankara, Turkey, Feb. 4, 2021. (AA Photo)
by DAILY SABAH WITH AA Feb 05, 2021 9:09 am
RECOMMENDED

The counselor of the Russian Embassy in Turkey rejected claims that the PKK terrorist group's Syrian offshoot, the YPG, has an office in the capital Moscow.

Counselor Alexandr Sotnichenko, who is also the Russian Culture and Science Center president, said that Moscow does not have good relations with the terrorist group due to its separatist stance. Russia supports Syria's territorial integrity, he underlined.

Speaking at a panel on "Foreign Policy of Russia after the Cold War" at the Institute for Strategic Thinking (SDE) in Ankara on Thursday, Sotnichenko said the office of the YPG was used for a television channel.

"The YPG/PKK opened an office for their television in Moscow in 2015," he said.

He said when he went to Moscow to visit the office, he could not find it, stating: "100%, there is no such office. It was purely a political act."

Citing the strained relationship between Turkey and Russia after a Russian fighter jet was shot down in 2015, killing two pilots, he said that some in Moscow agreed to support slapping sanctions on Ankara.

Noting that the U.S. has been withdrawing from the Middle East due to problems at home, Sotnichenko said there is a “power vacuum” in Eurasia and this provides an opportunity for Turkey and Russia.

The Russian counselor also urged the two countries to cooperate against terrorism, even though Moscow and Ankara support different sides in Libya and Syria because neither country wants war near its borders.

He also claimed that the U.S. was providing financial and military assistance to the YPG because Washington wants to have a piece of the pie in Syria.

Regarding the Astana process, Sotnichenko noted that the two countries will utilize their experience in other fields as well.

The Astana meeting was initiated by Turkey, Iran and Russia to bring the warring sides in Syria together to find a permanent solution to the 10-year-long war. The main agenda items have been the constitutional system, the political transition, security and resettlement. The first meeting of the Astana process was in Turkey in January 2017 to facilitate United Nations-sponsored peace talks in Geneva.

Ankara and Moscow, which back opposing sides in Syria’s war, agreed to halt military activity in Idlib after an escalation in violence displaced nearly 1 million people and brought the two sides close to confrontation. The deal addressed Turkey’s main concerns, stopping a flow of refugees to its border and preventing the deaths of more Turkish soldiers on the ground.

Touching on the Libyan conflict, Sotnichenko said Moscow is in favor of Libya’s territorial integrity.

“We want all sides to sit on the negotiation table in Libya,” he said.

Turkey and Russia launched an initiative in Istanbul on Jan. 8, 2020, to de-escalate the situation on the ground and pave the way for a political process in Libya. This initiative was followed by the Berlin conference, which was supported and facilitated by the U.N. in an effort to secure a permanent cease-fire, but the meetings ended without reaching a conclusion as Haftar walked out.

Under a U.N.-backed cease-fire signed Oct. 23, foreign troops and mercenaries were to pull out of Libya within three months. That deadline passed in late January with no movement announced or observed on the ground.

Foreign mercenaries and arms have poured into the country since Haftar launched his offensive, with Russia and the United Arab Emirates serving as the putschist general’s top suppliers.