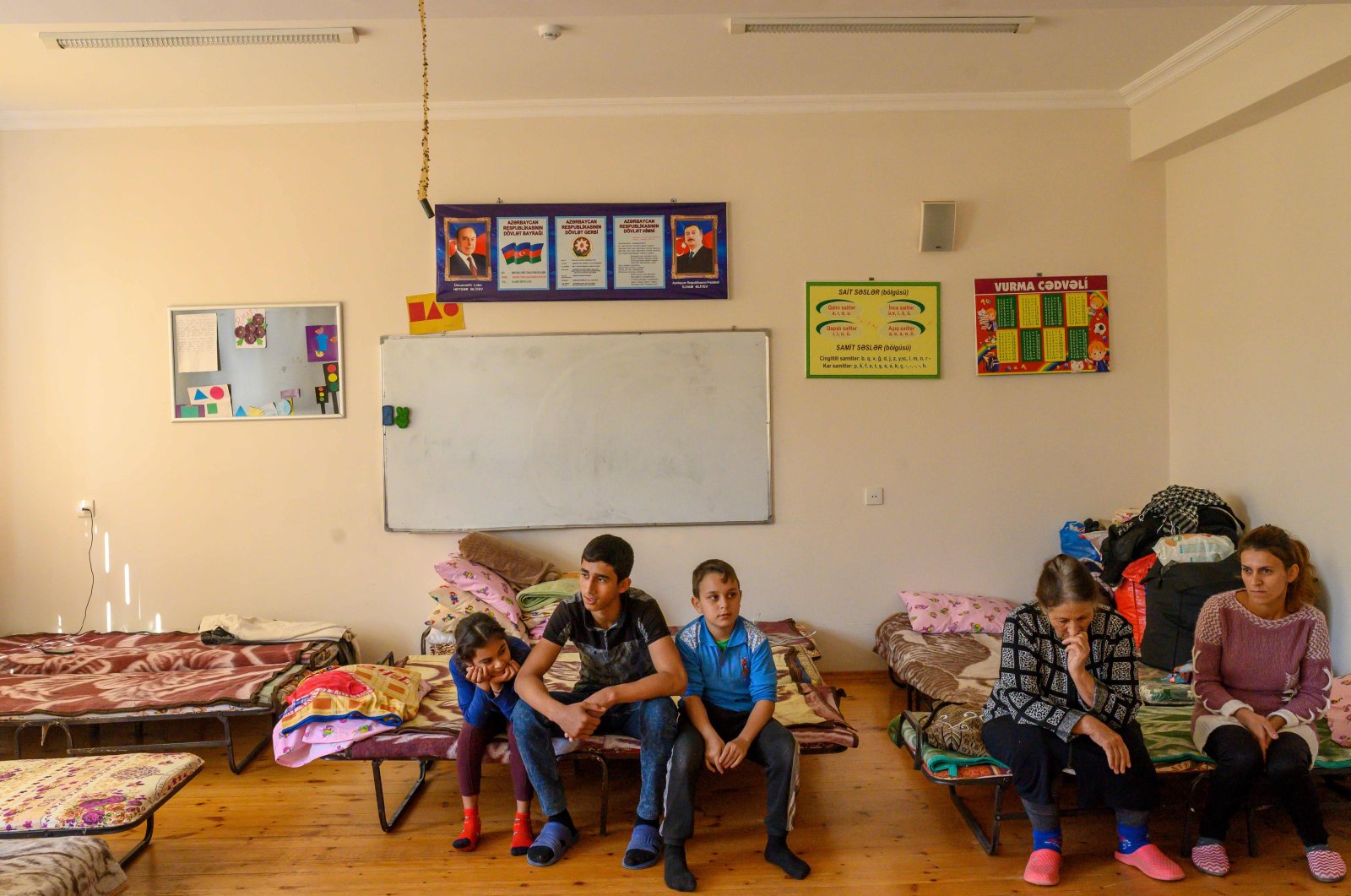 A refugee family who fled Tartar due to the ongoing military conflict between Armenia and Azerbaijan over the Armenian-occupied region of Nagorno-Karabakh is seen in a classroom of a secondary school in the town of Barda, Azerbaijan, Oct. 12, 2020. (AFP Photo)
by French Press Agency - AFP Oct 12, 2020 8:57 pm
RECOMMENDED

The thunder of exploding shells rolled in from the Nagorno-Karabakh mountains as Gultekin Rakhimova washed three tiny shirts in a rusty bucket near a well.

The rugged-faced refugee's three small children have not slept properly since everyone ran from the rockets that rained down on their houses on the Azerbaijani side of the front line two weeks ago.

"They wake up and cry. They have nightmares because the dead come back in their dreams," the 42-year-old said while one of her boys tossed pebbles at a rooster on the grounds of their new home in a village grammar school.

"Psychologically, they are not in a very good state," she said.

Azerbaijan's government has set up a web of refugee shelters around its frontier with the blood-soaked region Armenia has occupied for decades.

The shelter Rakhimova fled to in the village of Otuzikiler when heavy fighting resumed on Sept. 27 now houses 299 people and is full.

They traveled the 20 kilometers (12 miles) by foot and by car in a steady stream while the fighting rumbled in the mountains overhead.

Some shells smashed into the surrounding apple orchards while others fell on their dusty road.

Not everyone made it out alive.

"The people on the road were dying," Fatma Suleymanova said while hanging freshly washed laundry on ropes tied to the goalposts of the school's playground.

"Two of our neighbors were killed by a shell," the pensioner said.

Everything from the Otuzikiler school's field house to hallways and utility rooms has been transformed into living quarters crammed with simple cots.

Each one has a threadbare blanket but no pillow. One room the size of a small kitchen had four cots for a family of six.

"We left all our belongings, everything that we need. Of course it's difficult," Gultekin Rakhimova's cousin Natavan Rakhimova said.

The shelling echoing around them went quiet when the warring sides signed up to a humanitarian cease-fire in Moscow on Saturday.

But it was only a brief lull that allowed some of the refugees to rush back to their homes and pick up what they could of their belongings before running back out again.

The truce appeared forgotten by the time a missile killed 10 civilians in Azerbaijan's second-largest city of Ganja on Sunday.

The thumps heard around Otuzikiler on Monday began in the morning and had become incessant by the afternoon.

More than 500 people have been killed since the fighting broke out including more than 60 civilians on both sides.

The mood inside the school ranged from weariness to defiance.

"Of course we want to return," said Siyafir Bagirova while sitting on her cot under a framed portrait of Azerbaijani President Ilham Aliyev.

"We are living in a children's grammar school. How could we possibly want to stay here?" she said.

The refugees said their meals consist of rice and buckwheat. Some also buy vegetables from roadside stalls.

But no one Agence France-Presse (AFP) spoke to regretted the fighting because they believed Azerbaijan's forces were on the ascent to regain their rightful territory.

Sakhir Huseinov said he took his family out of the front-line village of Tartar because "the kids were frightened by the sounds of shelling."

But the young father said he tells his children the suffering was temporary and worth the price of winning back Azerbaijanis' ancestral lands.

"My brother is now there, fighting," Huseinov said while bouncing his young son on his lap.

"I tell my children: There is a war, the Armenians are shelling us. That is why our brothers are fighting and our hearts are with them," he said.