Displaced Syrians continue to hold onto hopes of returning home 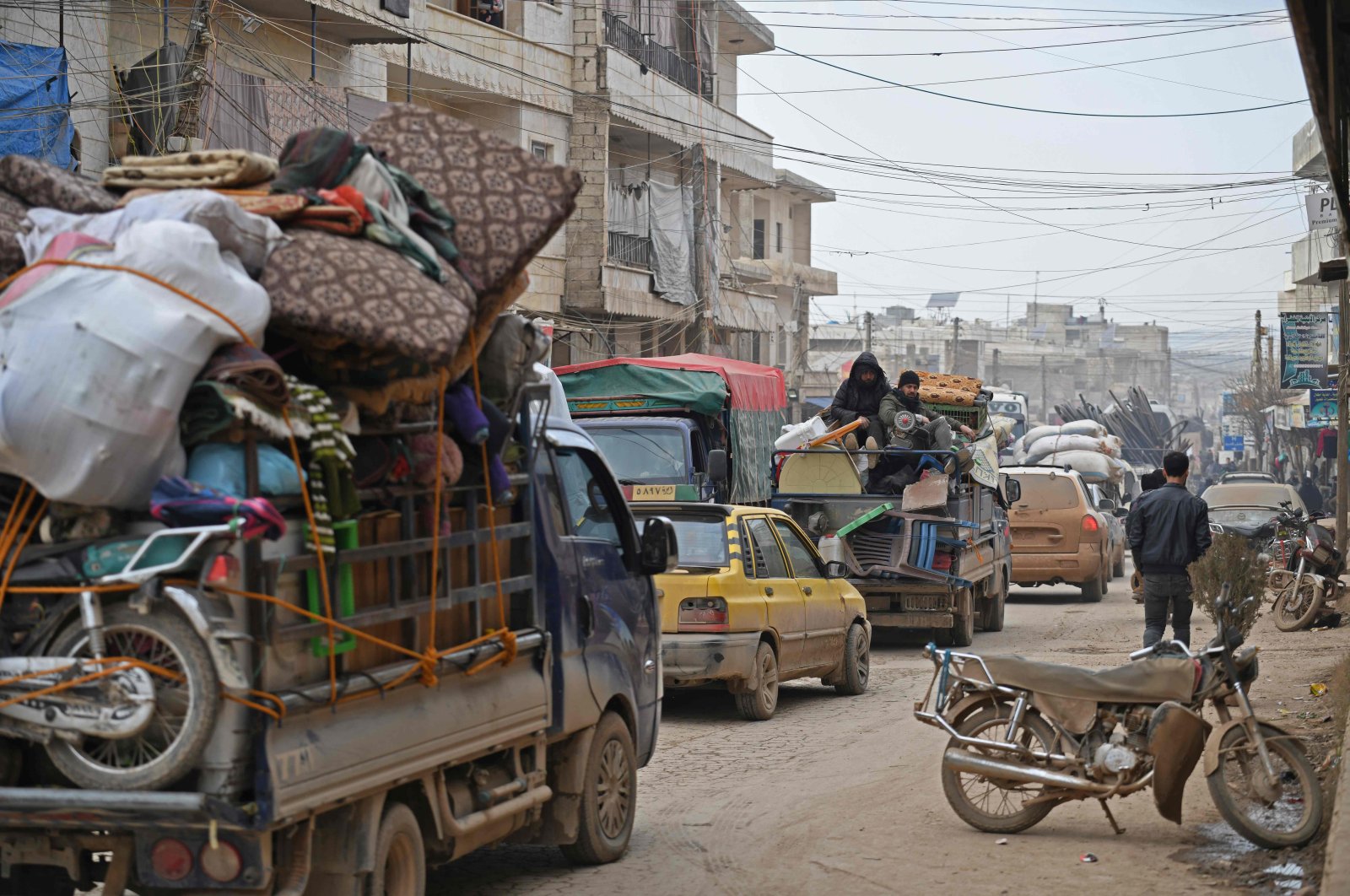 Vehicles carrying internally-displaced persons (IDPs) and their belongings drive through the Syrian town of Atme near the Turkish border towards the city of Afrin, as people flee advancing Syrian regime forces in Idlib and Aleppo provinces, Feb. 17, 2020. (AFP)
by Daily Sabah with Agencies Mar 15, 2020 2:02 pm
RECOMMENDED

After a decade of suffering, millions of Syrians who were displaced from their hometowns due to the brutality of the Bashar Assad regime still have hope against hope to return to their homes in Syria one day, reiterating their determination to not live under the current rule in the war-torn country.
Yesterday marked the ninth anniversary of the Syrian civil war. Starting with a peaceful protest in Daraa province on March 15, 2011, the civilian resistance against Assad's rule quickly escalated into a civil war due to the regime's violence against the protesters. Since then, the regime has been using forcible displacement, constant attacks, and blockades as a systematic weapon against civilians. In the end, millions of people have been displaced, forced to live with the constant longing for their hometowns while hundreds of thousands have been killed by the regime attacks.

"We hope to turn back to our homes one day," said seventy-year-old Abu Naim, who is one of the displaced civilians who had to leave his hometown in Eastern Ghouta in 2018.

Northwestern Syria's Idlib province has become one of the points of migration throughout the years, as it was known as an opposition stronghold, as well as a safe spot for the refugees to come. Especially after the Astana agreement reached between Turkey, Russia and Iran in May 2017 to pave the way for a permanent political solution in Syria, the population of the province, which was 1.5 million at that time, has swelled to around 3 million. The province received a major migrant influx from Eastern Ghouta in April 2018 and Daraa and Quneitra in July 2018.

Being one of the participants in the initial protests in Daraa back in 2011, Naim said that their movement was truly peaceful and yet, the regime's insistence on violence led incidents to reach points beyond imagination.

"Everyone was expecting for a statement from Bashar Assad," said Naim, remembering the atmosphere during the first protests. "We were hoping for him to hear us out and ease our suffering. However, the total opposite has happened. Things got flared out gradually. Assad declared us, civilians, as terrorists. We are not terrorists," Naim said.

However, the horrors of the regime continued to follow these millions of civilians in Idlib as well since the Assad forces, backed by Russia and Iran, escalated their attacks on the province in April 2019, to the point that would force the already displaced people to migrate again, this time toward the Turkish border.

Currently, these 1.5 million civilians who are trying to survive in the camps near the Turkish border are getting through the everyday struggles with the dream of returning to their hometowns one day.

According to Naim, as the regime forces lose strength, Russia intervened in the civil war, causing the already complex conflict to turn into a deadlock.

Regarding the blockade in Eastern Ghouta, Naim said: "During the blockade, we ate leaves and herbs. Actually, we ate whatever we can find. Because there was hunger. We were surrendered by the regime forces. There were heavy attacks. The houses were being damaged by the bombardments. Women, children, everyone that were inside the houses was being killed. We were always escaping from the places that were under heavy attacks. We have been displaced numerous times. The attacks have never stopped. Now, we are saying, 'Thank God we have a place to live.'"

"We have peacefully reacted against the cruel regime force. The protests were an honor revolution for us, against brutality," said Abu Rawan, another refugee who participated in the protests in Daraa back in 2011. "We were unarmed and yet, still, regime forces fired at us. We had many martyrs, and many of us got injured," he added.

Rawan was also one of those injured protestors who had to go to Jordan for proper treatment. However, after the treatment, he returned to Syria, only to end up as a refugee on the Turkish border.

In Rawan's opinion, the opposition forces had to be armed after the regime reacted to the protests violently. It was an attempt of self-defense, Rawan said.

After the regime's attack on Daraa in 2018, Russia came with an offer to the locals in the region, including Rawan.

"We had two options. We were either supposed to live under the control of the regime and its backers or move toward northern Syria. we chose the second option. Now, I prefer living in a tent in northern Syria than living under regime brutality. We hope to save Daraa from the regime and return," he said.

Apart from the witnesses of the early protests, there are also thousands of innocent children on the Turkish border who do not remember a thing but still stick to the dreams of a better future for Syria. Ten-year-old Asma Maruf is one of them, whose only dream is to study civil engineering in Turkey and reconstruct her war-torn country.

"When I was born, the war had already begun. I grew up with bombs rather than toys," said Maruf.

Losing her brother at a very early age to the regime attacks, Maruf expressed that despite everything, she does not want to leave Syria.

"I do not want to leave my hometown. However, I want to cross the border to Turkey and become a civil engineer there and eventually rebuild my country. My country needs this," she said.