Displaced Syrians in Idlib welcome Ramadan while longing for home 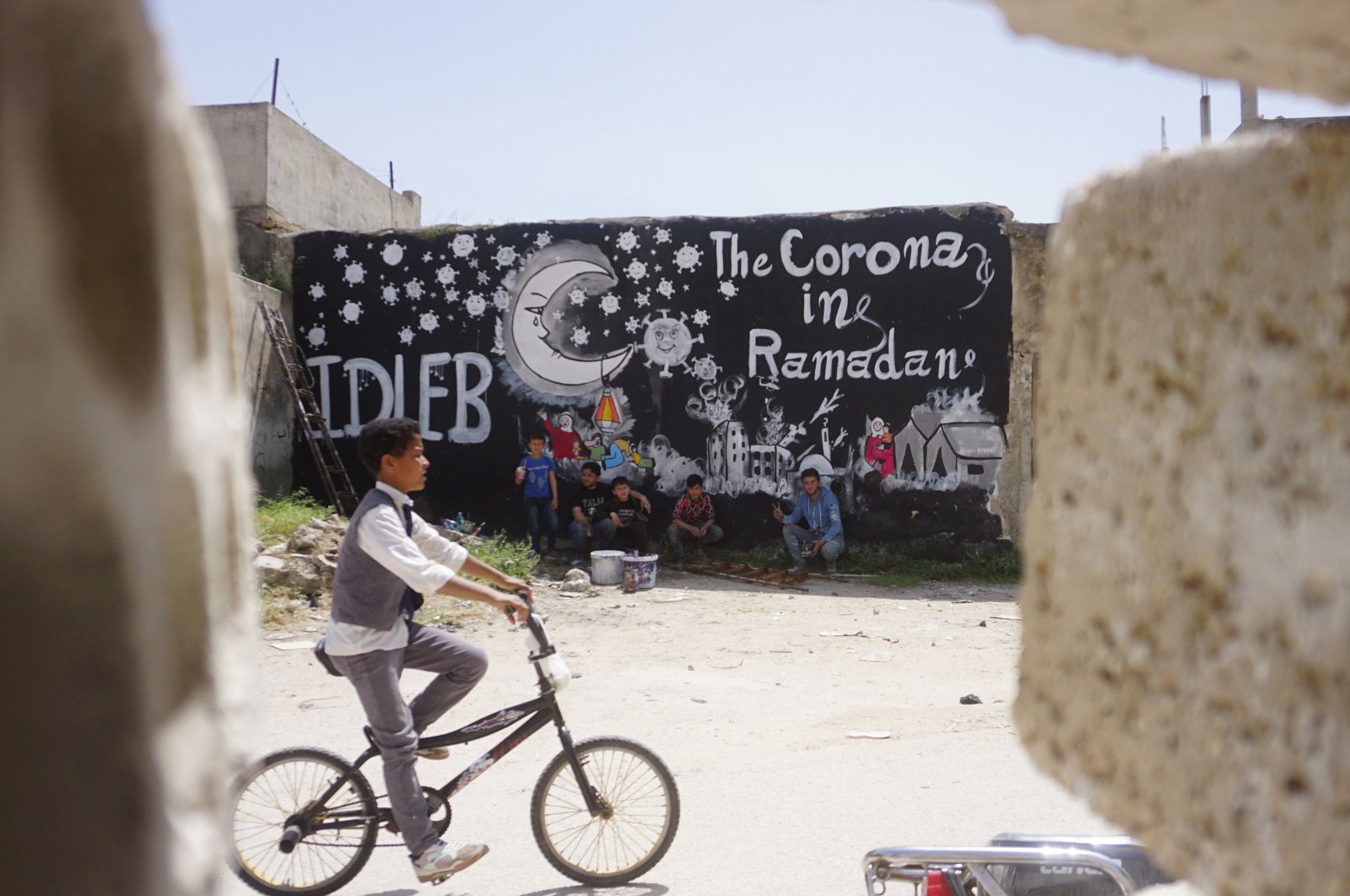 Syrian boys sit in front of a mural by artist Aziz al-Asmar (unseen) depicting the situation of displaced Syrians in camps amid the COVID-19 pandemic ahead of the holy fasting month of Ramadan, in the town of Binnish in Syria's northwestern Idlib province on April 23, 2020. (AFP)
by DAILY SABAH WITH AA Apr 24, 2020 12:58 pm
RECOMMENDED

"This is my first Ramadan away from home," said Şahin Abu Mahmut, one of the millions of displaced Syrians that had to leave home due to Bashar Assad regime attacks in northwestern Syria's Idlib province.

On Friday, Muslims all around the world welcomed the holy month of Ramadan. Despite being known as the month that brings people and families together, in Idlib, displaced civilians had to get through the holy month while being away from home and families. The refugees woke up for their first sahur, the pre-dawn meal, on Friday morning under the relatively calm atmosphere provided by a cease-fire brokered by Turkey and Russia last month.

Speaking to Anadolu Agency (AA), Mahmut said that despite being displaced relatively recently, seven months ago, he shares the feelings of the ones who had to migrate eight years ago.

"Only the ones who suffer from this pain can understand this feeling, the ones who had to leave their homes. I hope that everyone returns to their homes and war stops," Mahmut said. He has been living in the Atme camp near the Turkish border.

"My sole desire is to return home. I am content with living safely with basic resources. If the regime would not retreat from our towns, we can't go back. How can we? My uncle and his family, my brother, niece, another uncle, they were all killed during the last Ramadan by Russian attacks," he said.

Being the father of three, Mahmut said that last year, at least 50 bombs were dropped near their home, causing them to eventually leave the town.

Idlib is currently home to about 4 million civilians, including hundreds of thousands escaping violence in recent years by regime forces throughout war-torn Syria, with some likely taking the cease-fire as an opportunity to return home.

Last month's cease-fire in Idlib is proving to be a blessing for the country, as many civilians who returned to their homes are working and trying to earn a living.

Farming and fishery activities have started to flourish again in the wake of the truce, locals told AA.

Farmers are raising sheep, goats and fish in the Hama province, an area with extensive grasslands due south of Idlib and one of Syria's most important centers for farm-raised fish.

On Tuesday, Muhammad Hallaj, the director of Syria's Response Coordination Group, said to AA that 185,000 displaced Syrians returned to their homes immediately after the cease-fire.

Nearly 37,000 families have returned to Idlib city, its nearby rural areas and the Aleppo countryside, he added.

The director called on nongovernmental organizations to increase their aid activities for the safe return of civilians, adding that he expected more people to go back if the cease-fire continues.