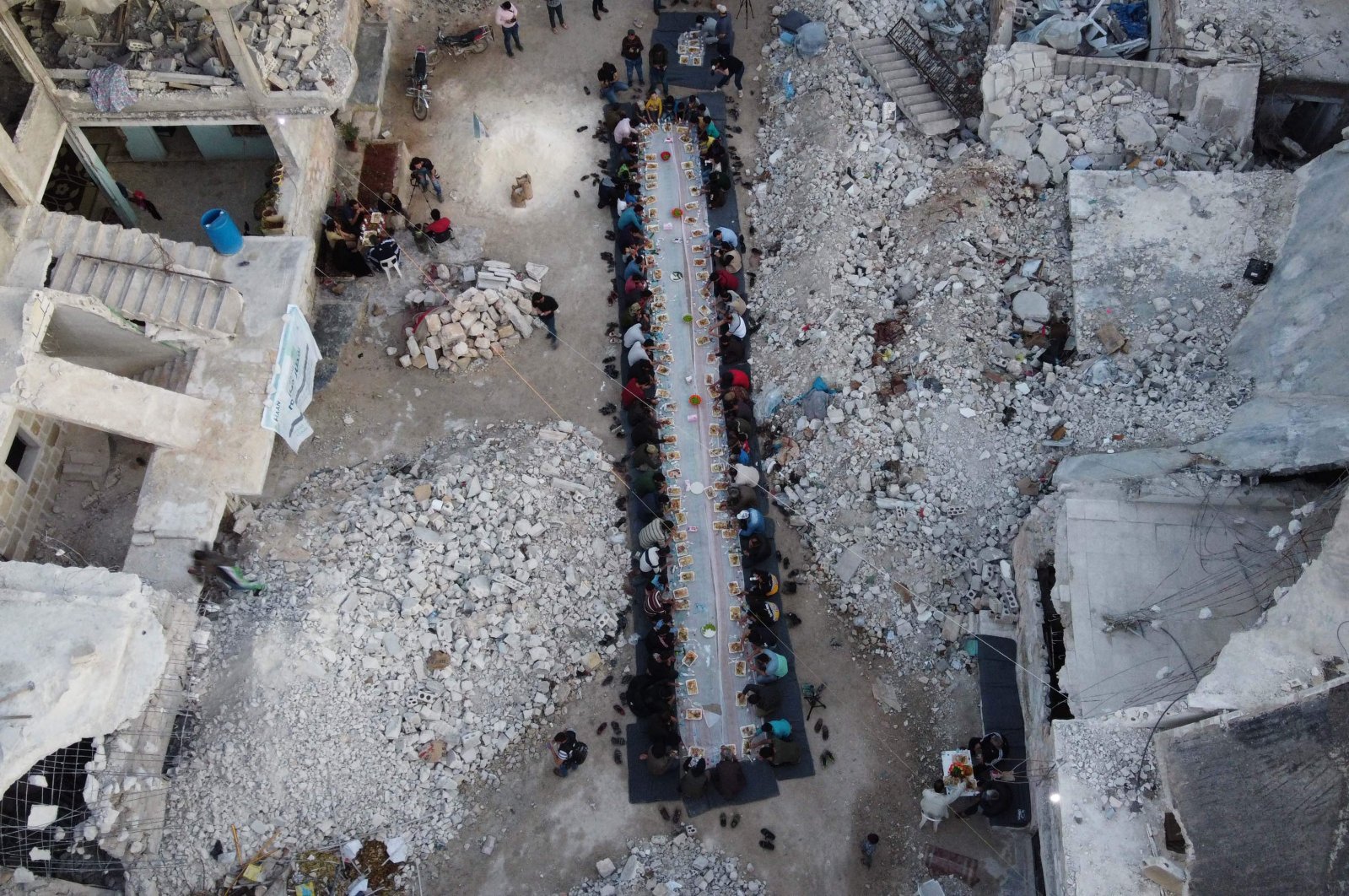 Displaced Syrians sit amid the ruins of their destroyed neighborhood as they break their fast during an iftar organized by a local charity in Atareb town in the opposition-held western countryside of Syria's Aleppo province, May 7, 2020. (AFP Photo)
by Daily Sabah with AFP May 14, 2020 12:10 pm
RECOMMENDED

Millions of displaced Syrians have been trying to sustain their hope for a better life by observing Ramadan traditions this year in tent settlements, overcrowded camps and the ruins of their former homes.

In a procession between the tents of Syrians displaced by war during the dark of night, Ramadan drummer Abdelfattah al-Bayour bangs on a saucepan, calling on his neighbors to wake up for a last meal before dawn.

Every morning during the Islamic fasting month of Ramadan, the 42-year-old rises at 2 a.m. inside his tent in Syria's last major opposition stronghold of Idlib.

He dons a long beige robe and white skullcap, grabs a metal ladle and cooking pot and heads out into the night to awaken those fasting during the day for a predawn meal called sahur.

His teenage son Mustafa tags along, shining a small torch into the darkness as they tour the tented settlement near the village of Killi.

"Wake up, sleeper. Profess belief in the Eternal," he bellows, topping off each call with four rhythmical bangs.

For 15 years, Bayour has been a musaharati, a traditional drummer whose role it is during Ramadan to wake up neighbors to grab one last bite or sip before fasting from dawn to dusk.

But this Ramadan is the first he and his family are spending in a camp after their home was destroyed late last year in a military offensive by the Russia-backed Bashar Assad regime.

"Back in the village, I used to walk between the houses along paved roads," says Bayour.

Some eight months ago, he, his wife and his five children escaped as pro-Damascus troops advanced on their home village of Kafr Rouma some 60 kilometers (40 miles) south.

In the rush to flee, Bayour left most of his belongings behind, including his musaharati outfit of baggy trousers, embroidered jacket and drum.

Syrians in Idlib welcomed a bittersweet Ramadan this year, with the March cease-fire allowing them the chance to have a relatively peaceful holy month despite the surrounding ruins serving as a stark reminder of previous attacks from the not-too-distant past.

In Idlib city center, however, with the coming of Ramadan, steps toward normalization have started to take place despite the threat of the coronavirus. People have started once again to shop for the holy month, with bazaars reopening and offering festive trinkets to mark the Ramadan spirit.

A cease-fire was reached between Ankara and Moscow after talks aimed at containing the escalating conflict. Relations were strained prior to the agreement, with both sides trading accusations of having violated the Sochi deal, which created a buffer zone and allowed for the setting up of 12 Turkish observation posts. Several previous deals to end the fighting in Idlib have collapsed.

Since April 2018, attacks on the last opposition stronghold have intensified, causing more than a million refugees to move toward the Turkish border, putting the country, which already hosts 3.7 million Syrian refugees, in a difficult position.

According to the United Nations, about 1 million Syrians have fled Idlib and its surrounding countryside this past year due to the attacks, as overcrowded settlements are teeming with fresh arrivals, and many of the displaced are forced to sleep in freezing temperatures in open spaces. As the tentative peace holds, displaced Syrians are weighing up a series of grim options: remain in tightly packed camps with few services where a viral spread could be lethal or return to homes still at risk of getting caught in renewed conflict.

So far, since the cease-fire, about 235,000 displaced Syrians have been able to return to their homes. Mohammad Hallaj, director of Syria's Response Coordination Group, which carries out work on migration data in the region, said earlier this month that the displaced civilians' return to their hometowns continued as the cease-fire held. However, since these civilians are at the risk of encountering unexploded bomb remains as well as a lack of infrastructure and basic needs, they are still in need of major humanitarian aid.

Although the truce since March 6 has largely stemmed airstrikes and fighting, Bayour's village is now on the other side of the armistice line.

But dozens of Bayour's relatives or old neighbors have also set up camp in Killi near the Turkish border, providing a little familiarity as he performs a role he describes as a "hobby."

"Being a musaharati is a profession, but also a passion. I love doing it, and it earns me some money," he says, as he sometimes receives money or presents for his role.

During the day during Ramadan, he pushes around a wooden cart loaded with sticky pastries from a bakery, hoping to sell them.

"We've been used to having Abdelfattah al-Bayour as a musaharati since we were in the village," says the married father of 10.

"He would tour the village banging on his drum. All of us remember its sound," he says.

"We hope soon to return to it and its great Ramadan atmosphere – so much better there than here."