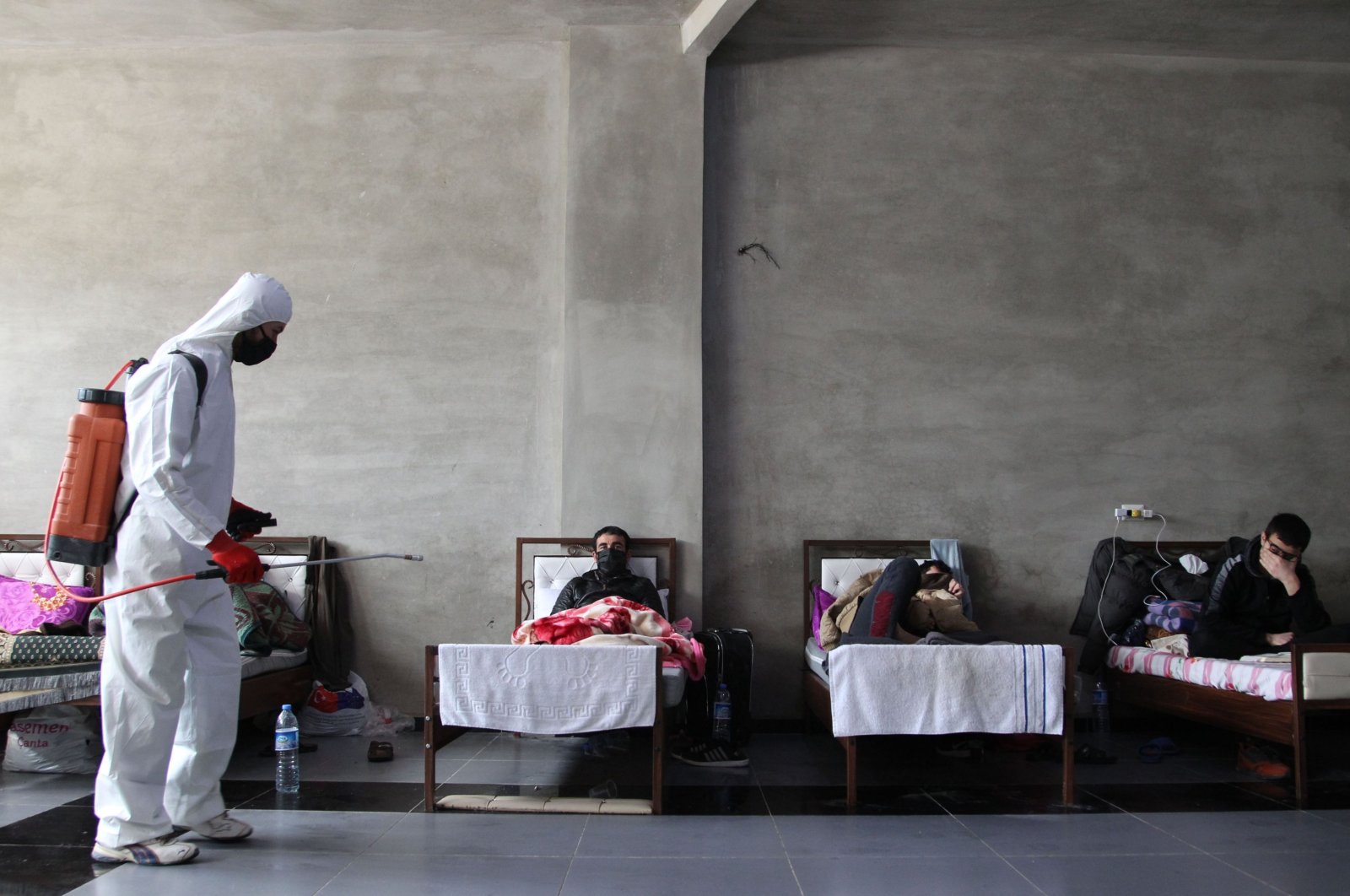 A man sanitizes the room as Syrians who returned from Turkey rest at a COVID-19 quarantine facility in the town of Jisr al-Shughur, west of the mostly opposition-held Syrian province of Idlib, Syria, April 27, 2020. (AFP Photo)
by Daily Sabah with AP Jun 19, 2020 12:06 pm
Edited By Dilara Aslan

A proposed draft U.N. resolution has emphasized that 11 million Syrians are in need of aid and that cross-border deliveries remain “an urgent and temporary solution” to help them. Meanwhile, Human Rights Watch (HRW) on Thursday urged for the reauthorization of cross-border aid to the war-torn country.

The proposed Security Council resolution, drafted by Belgium and Germany and obtained by AP, would maintain two border crossing points from Turkey to deliver humanitarian aid to Syria’s mainly opposition-held northwest and reopen an Iraqi crossing to the northeast to deliver medical supplies for the COVID-19 pandemic.

Syria's war has devastated the country's economy since 2011, plunging 80% of its people into poverty, according to the United Nations. For years, Bashar Assad has ignored the needs and safety of the Syrian people, only eyeing further gains of territory and crushing the opposition. With this aim, the regime has for years bombed vital facilities such as schools, hospitals and residential areas, causing the displacement of half the country’s population. The situation became especially critical in the northwestern provinces of Aleppo and Idlib, which are still a target for the Assad regime as opposition-controlled areas he vowed to take back. With almost 50% of health facilities out of service, the Syrian people are vulnerable in the face of the global coronavirus pandemic.

The draft states that the pandemic presents “a profound challenge to Syria´s health system, socioeconomic and humanitarian situations” and “heightens the imperative of using every possible means of reaching people in need.”

Russia, which insisted the Iraqi crossing be shut down in January, holds the key to future cross-border operations. It contends cross-border aid was meant to be a temporary response to the nine-year Syrian conflict and that the situation on the ground has changed.

In January, Russia scored a victory for its close ally Syria, using its veto threat to force the Security Council to adopt a resolution reducing the number of crossing points for aid deliveries from four to just two, from Turkey to the northwest. It also cut in half the yearlong mandate that had been in place since cross-border deliveries began in 2014 to six months, as Russia insisted.

The newly circulated draft resolution would extend the mandate for the two border crossings from Turkey to the northwest – Bab al-Salam and Bab al-Hawa – for a year. And it would reopen the Al Yarubiyah crossing from Iraq for an initial period of six months until Jan. 10, 2021, and for an additional six-month period if the council decides the impact of the pandemic warrants it after evaluating a report to be done by U.N. Secretary-General Antonio Guterres.

Last month, U.N. humanitarian chief Mark Lowcock called the northwest border operation “a lifeline for millions of civilians whom the U.N. cannot reach by other means,” saying deliveries are at record levels with 1,365 trucks crossing from Turkey in April.

Until January, the U.N. Security Council allowed U.N. agencies to transport aid through a border crossing, from Rabia, in Iraq, to al-Yarubiyah, in northeast Syria. Al Yarubiyah had been used mainly to deliver medical supplies to the northeast and while a first road delivery from Syria made it to the region in May, U.N. officials say the crossing from Iraq is essential to bring in COVID-19 supplies.

Last month, Russia’s U.N. Ambassador Vassily Nebenzia said in a response to Lowcock and calls by U.S. Ambassador Kelly Craft for the Iraq crossing to be opened: “Do not waste your time on efforts to reopen the closed cross-border points.”

Turkey had also previously called on the U.N. to open further border-crossings. Turkey last year stated that there should be a fifth border gate for the delivery of aid in the northern Syrian province of Tal Abyad, again opposed by Russia. Despite the efforts of many nongovernmental organizations from around the world, as well as countries like Turkey, the amount of aid reaching the war-torn country is still insufficient, causing the international community to have come up with new initiatives to solve the problem.

HRW’s U.N. Director Louis Charbonneau said its research in late April showed that restrictions on aid from Damasus and Iraq were preventing medical supplies and personnel from reaching 2 million people in the northeast, where there were dozens of confirmed COVID-19 cases in May and at least three deaths.

“The U.N. Security Council – including Russia – needs to act quickly to reauthorize medical aid deliveries from Iran to Syria’s northeast to prevent further spread of COVID-19 that could devastate the region,” Charbonneau said, stressing that alternatives to Al Yarubiyah proposed by Russia and others “have failed to close the gap.”

Whether Russia will allow the reopening of Al Yarubiyah remains to be seen. The current mandate for the two Turkish crossings ends on July 10, and the Security Council hasn’t yet engaged in serious discussions on the Belgian-German draft resolution.

While Syria is reported to have had 177 cases of COVID-19 and six fatalities as of June 14, the low level of testing means the real figure is undoubtedly higher.

The regime’s refusal to transfer aid to areas not under its control was denounced by the HRW in a report late April.

“Under international law, Syria has an obligation to realize the entire population’s right to health. Although limited resources and capacity may mean that these rights can only be fully realized over time, the authorities are still obliged not to discriminate between different parts of the population, and they must justify any aid delivery limitations,” the HRW said, adding that under international humanitarian law, consent to allow relief operations cannot be withheld on arbitrary grounds.

Yearslong sieges have caused the deterioration of the physical health of many Syrians, who have suffered from malnutrition and widespread poverty. Another risk is that people often live in overcrowded places and camps, ideal for the spread of the virus. The camps are generally in poor condition with a lack of access to water, medical aid and food.