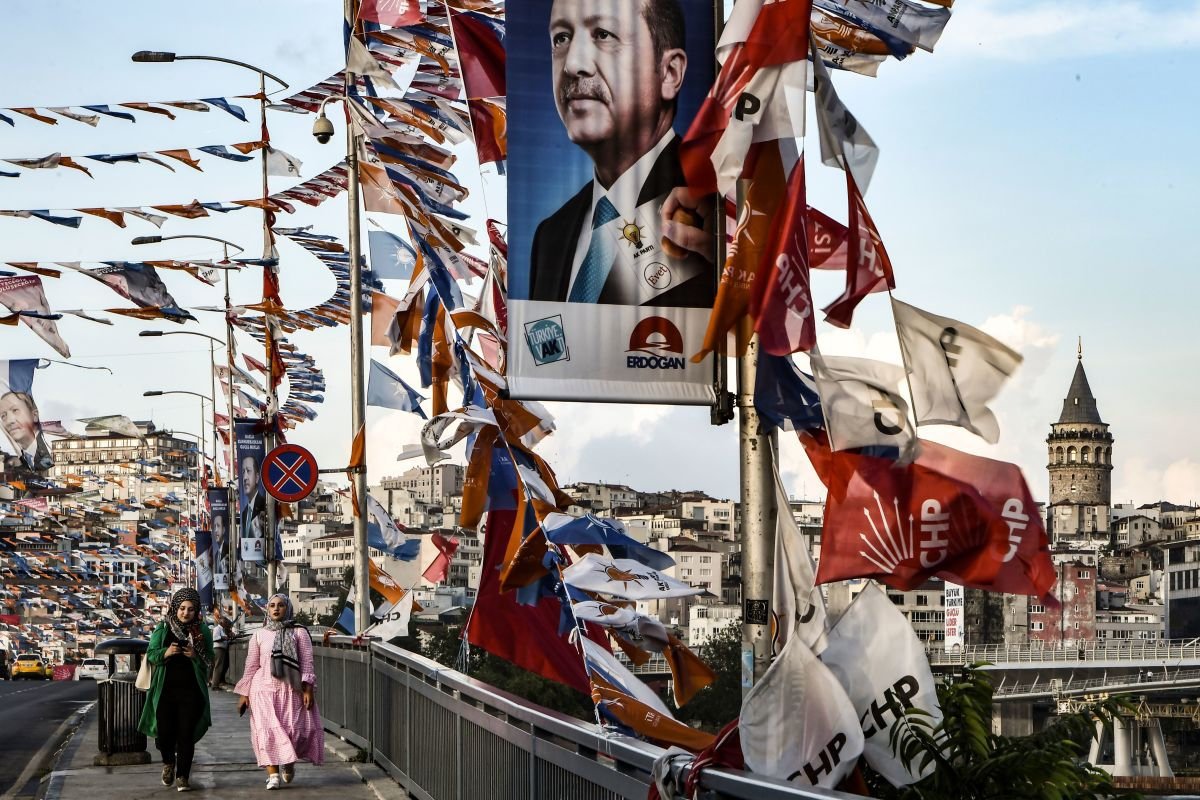 Women walk on a bridge past campaign banners ahead of the June 24 Presidential and Parliamentary elections in Istanbul, Turkey, June 18, 2018.
by DAILY SABAH Dec 21, 2020 2:32 pm
RECOMMENDED

As 2020 comes to an end, the ruling Justice and Development Party (AK Party) looks poised to conclude yet another year as Turkey's leading political party, as evident in a series of election surveys over the past month.

Over the past weeks, several research companies have released their polls for a hypothetical snap election. All of them showed that the AK Party, which has been at the helm of Turkey for almost two decades now, still prevails over its rivals, with the potential of receiving as much as 42.1% of the votes in some cases.

The latest election poll, conducted from Dec. 5-Dec. 15, in Turkey's all 81 provinces, was released by the Konsensus Research Company on Monday. It asked people about their approval of political alliances, rather than specific political parties.

The possibility of a snap election, however, seems to be quite unpopular among the voters, as the research found that only 24.4% of the people favor such a scenario, while 75.6% preferred 2023 as the scheduled election date.

The likelihood of a snap election recently dominated agendas, especially among the opposition circles. The claim, however, was dismissed by government officials on multiple occasions.

On Saturday, President Recep Tayyip Erdoğan hinted at June 2023 as the likely date for the next elections, saying that 2023 will be the year of victory for the People’s Alliance.

Earlier on Dec. 8, AK Party deputy chair, Numan Kurtulmuş, also said snap polls were not on the agenda and elections would be held on schedule in June 2023. There are currently no "rational and political conditions to hold early elections in Turkey," Kurtulmuş told lawmakers.

Nevertheless, another recent election polls done by the OPTIMAR Research Company found that if there were snap polls today, the AK Party would receive 41.2% of the votes, while CHP would get 23.7%, followed by the MHP with 11.1%, the IP with 10.9% and pro-PKK People's Democratic Party (HDP) with 8.4%, which is below the 10% election threshold, meaning it would not enter Parliament.

Similarly, GENAR Research Company's November survey, which was conducted in 31 provinces with 3,000 participants, shows that the AK Party has the potential to receive 42.1% of the votes while the CHP gets 22.8%. The survey reveals that the MHP and IP receive support enabling them to receive percentages just above the election threshold with 10.3% and 10.1%, respectively. The HDP, on the other hand, receives only 9.7% of the votes.

MetroPOLL Research Company, AVRASYA Research Company and ORC also released their December survey results recently, both of which pointed at the AK Party being in the lead once again, but with votes below 40%.

In MetroPOLL's survey, the AK Party receives 30.2% of the votes while the CHP gets only 16.4%. Surprisingly, these two parties are the only ones that can cross the 10% election threshold, according to MetroPOLL, as 12.8% of the participants expressed that they were undecided.

The survey was conducted between Nov. 26 and Dec. 1 in 42 provinces with 3,820 participants. The survey also showed that the newly formed parties – the Democracy and Progress Party (DEVA) and the Future Party (GP), receive more than 4% of the votes combined as DEVA gets 1.9% while GP gets 2.5%.

DEVA was formed by former Deputy Prime Minister Ali Babacan eight months after his resignation from the AK Party. One of the founding members of the AK Party, Babacan also served as the economy and then foreign minister before becoming deputy prime minister, a post he held from 2009 to 2015. GP, on the other hand, was formed by another AK Party dissident, former Prime Minister Ahmet Davutoğlu in December 2019.

AVRASYA, on the other hand, found that the AK Party would have received 34% of the votes, followed by the CHP with 26.7%. While MHP receives 11.2% of the votes, IP gets 11%. In this survey, HDP also gets 10.5% of the votes, above the election threshold. DEVA gets 2.1% of the votes, while GP gets 2.7%. The results of the survey were shared by the head of the Kemal Özkıraz with the note: "Interesting things are happening."

MAK Consultancy's November survey results showed that the AK Party gets support from 38.7% of the participants while CHP receives 24%, followed by the IP with 11.6%. Interestingly, these three become the only parties that manage to get support above the election threshold, as both MHP and HDP get votes just above 9%. Both GP and DEVA, on the other hand, receive 2.3% of the votes.

Meanwhile, The CHP ordered a survey from the Gezici Research Company, of which the results have been revealed recently by the head of the company, Murat Gezici. In his interview with Cumhuriyet daily. According to the survey, the AK Party receives 36.6% of the votes while the CHP gets 26.2%, followed by the HDP at 10.2%. While IP gets 9.6% of the votes, MHP receives only 8.8% of the votes, barring both from entering Parliament unless their respective political alliances come into play. DEVA, on the other hand, receives 6.6% of the votes.

The finding states that 48% of the participants, who said they will vote for the AK Party are older than the age of 44, while only 13.9% of the participants at the age interval between 18-27 shows support for the ruling party. On the contrary, CHP gets 37.4% support from ages 18-27, followed by DEVA with 33.3%.

After Erdoğan, the most popular name in the AK Party was revealed to be Interior Minister Süleyman Soylu, as 26.8% of the participants gave his name. Soylu is followed by Health Minister Fahrettin Koca, party spokesperson Ömer Çelik and Defense Minister Hulusi Akar, respectively.

When it comes to the CHP, Kılıçdaroğlu is followed by Istanbul Mayor Ekrem Imamoğlu with 21.9% in the popularity contest. After Imamoğlu, the most popular names in the CHP were Ankara Mayor Mansur Yavaş and the party's former presidential candidate, Muharrem İnce, respectively.

On another note, the survey reveals that 61% of the participants are concerned with their life prospects in Turkey, while 39.2% said they are "unhappy" and 24.4% expressed they are "neutral." Economic concerns are revealed to be a prominent factor that is highly mentioned among the participants.

As far as the presidential elections are concerned, the survey participants expressed that after Erdoğan, they see Yavaş as the next president of the country with 14.8%, followed by Imamoğlu with 12.6% and Soylu with 9.4%. Kılıçdaroğlu, on the other hand, seems to get the support of only 8.6% when it comes to his possible presidential candidacy.

At the beginning of the month, during the 2021 budget talks in Parliament, Kılıçdaroğlu confused public opinion with an ambiguous remark, saying: "Who told you that I will not race for the presidential elections?" This unexpected stance on a possible presidential candidacy kept Turkish politics busy for quite a while, raising questions about whether he was sincere in his statements or not.

Responding to Kılıçdaroğlu, Erdoğan on Dec.10, said: "Kılıçdaroğlu's upcoming steps are not our business. They only concern him. If he would be a presidential candidate, it would be appropriate for both his party and our country."

Later on, Kılıçdaroğlu referred to his earlier remarks and said: "There is nothing more wrong than me, deciding my own candidacy by myself."

Another statement on the issue came from Kılıçdaroğlu's ally, the IP head Meral Akşener on Sunday during a televised interview, as she touched on her possible "willingness" to be a presidential candidate.

"In this country, everyone that meets the criteria has the right to be a presidential candidate and be elected. We have never talked anything about the presidential candidacy," she said. "As for myself ... People always ask me whether or not I will be a candidate. As every Turkish citizen, I also dream about (the presidency) and want it. Everyone with a certain assertiveness would want that. However, I say it once again: I will not risk Turkey's future for my own desires."

According to the Turkish constitution, "the President of the Republic shall be elected directly by the public from among Turkish citizens over forty years of age who are eligible to be a deputy and have completed higher education."

The elected president's term of office is five years and a person may be elected as the president for two terms at most.

Turkish voters narrowly endorsed an executive presidency in the April 16, 2017 referendum with 51.4% of the votes. The official transition to the new system took place when Erdoğan took oath as president after the June 24, 2018, general elections, where he won 52.6% of the votes.