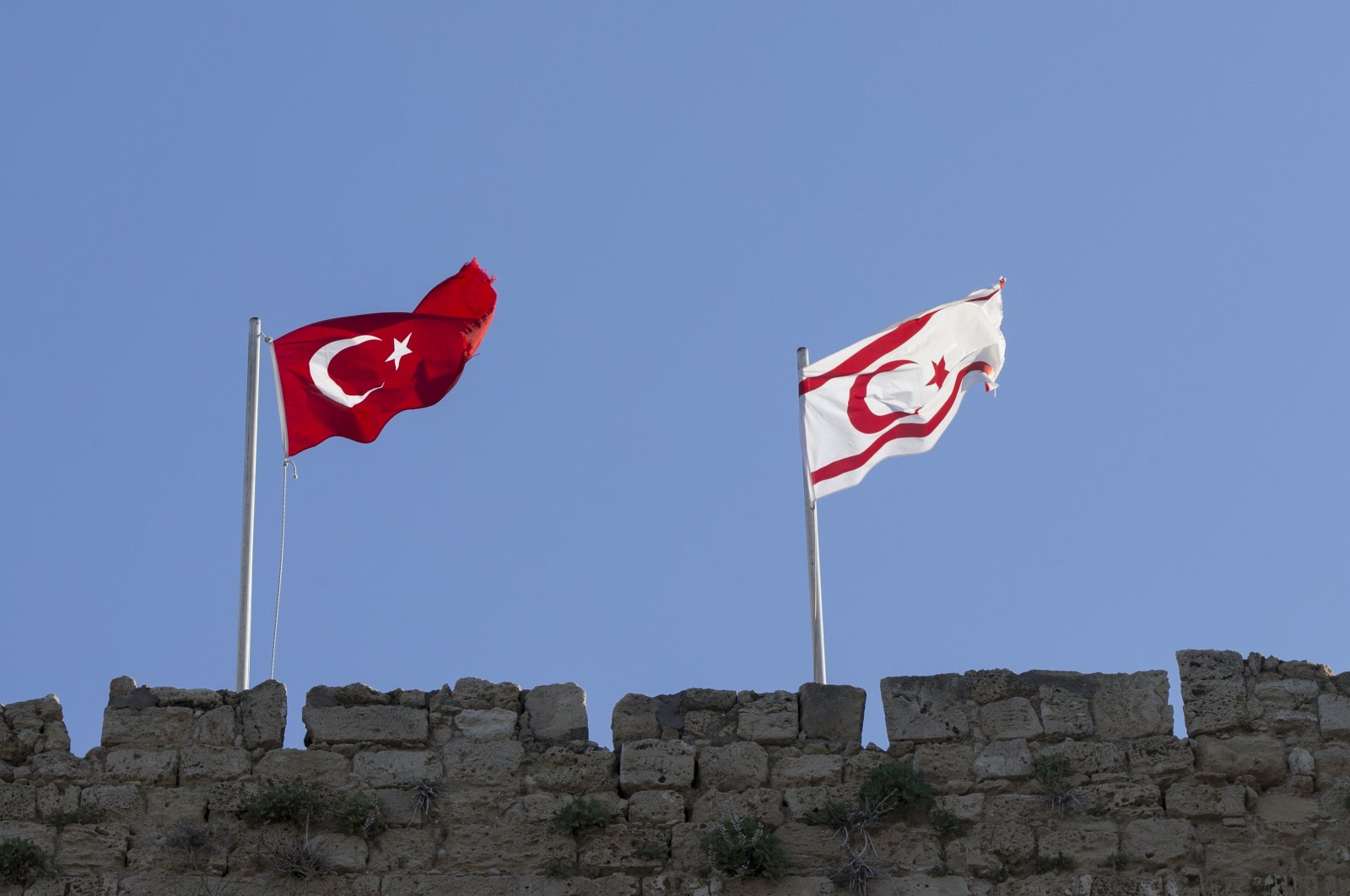 Turkish and Turkish Republic of Northern Cyprus (TRNC) flags wave side by side in this undated photo. (AA File Photo)
by DAILY SABAH WITH AGENCIES Sep 22, 2020 11:52 am

The TRNC's presidential elections, in which 11 candidates are vying for leadership, is expected to have far-reaching repercussions on the future of the East Mediterranean, especially in terms of solving the outstanding crisis on the island

After months of delay due to the coronavirus pandemic, the Turkish Republic of Northern Cyprus (TRNC) is finally getting ready to hold its 10th presidential elections next month, with developments in the Eastern Mediterranean expected to dominate the race, alongside ties with Ankara.

Initially scheduled to take place on April 26, the elections, in which 11 candidates are expected to battle it out, were delayed until Oct. 11.

Although the number of candidates is relatively high, the polls have already signaled the favorites, with those leading being incumbent President Mustafa Akıncı, Prime Minister Ersin Tatar, head of the center-left Republican Turkish Party (CTP) Tufan Erhürman and the Foreign Minister and Deputy Prime Minister Kudret Özersay.

The TRNC elects its president in a two-round election. If a candidate fails to appear as the front-runner in the first round, the second round takes place between only two of the leading candidates. A second vote is scheduled to take place on Oct. 18, if deemed necessary.

At the beginning of this year, Akıncı declared he would run independently. He is the fourth president of the TRNC and has held the office since 2015.

Originally an architect, Akıncı’s political career began with the mayorship of the Turkish side of the capital province of Nicosia (Lefkoşa), which lasted for 14 years. He was a member of the Communal Democracy Party (TDP), which was founded in 2007 with an emphasis on social democracy and a united Cyprus. This remained the case until his 2014 resignation.

In 2015, Akıncı competed as an independent in the country's presidential elections and won with a 60.5% share of the votes in the second round. Over the course of his presidency, he has given importance to the resolution of the Cyprus issue, restarting negotiations with the leader of the Greek Cypriot administration, Nicos Anastasiades.

Fellow favorite Tatar’s political career, on the other hand, gained initial momentum back in 2009 when he became the finance minister of the TRNC. Holding the office of prime minister since May 2019, Tatar, a Cambridge communications graduate, is also the head of the National Unity Party (UBP), a national-conservative party founded in 1975.

Similar to Tatar, Erhürman also leads the center-left Republican Turkish Party (CTP). A lawyer and an academician, Erhürman worked with Turkey’s Justice Ministry back in 1999 and became effective in establishing the status of ombudsman in the country. He participated in the Cyprus negotiations between 2008 and 2010 and has been a TRNC deputy since 2013 and head of the CTP since 2016. He became the prime minister of TRNC in 2018, holding the position until May 2019.

Özersay, on the other hand, who is an academic and lawyer, has made a name for himself mostly for his influential role in Cypriot negotiation talks, which he has been involved in for more than 12 years. Over this period, he has been given the chance to work with three TRNC presidents, four different leaders of the Greek side and two U.N. secretaries-general.

The 2020 race will not be the first presidential candidacy for Özersay, who took part in the 2015 elections as well. Receiving 21% of the votes back then, Özersay decided to launch his own People’s Party (HP) in 2016 that positioned itself on an anti-corruption ticket. In 2018, he became the foreign minister of the TRNC and recently resigned from the HP ahead of declaring his candidacy in the presidential elections.

Other candidates include TRNC's founding leader Rauf Denktaş's son, Serdar Denktaş, who heads the Democratic Party (DP) but running as an independent, as well as head of the Rebirth Party (YDP) Erhan Arıklı.

An academician and author, Arıklı has taken part in various diplomatic missions on behalf of the TRNC, including acting as a representative of the country in Central Asia. His work in Azerbaijan and Kyrgyzstan has enabled both of these countries to become some of TRNC's closest allies.

There are also relatively lower-profile candidates such as Arif Salih Kırdağ and Ahmet Boran, both of who will race independently. Kırdağ, in particular, comes to the forefront as a unique figure with a unique election campaign. Preparing for his third presidential election campaign, Kırdağ travels from village to village to sell his produce while also promoting his candidacy.

Different approaches to the Cyprus crisis

The biggest division among the candidates when it comes to their policies lies in their approach to the Cyprus crisis. Candidates like Akıncı and Erhürman support a federalist solution in line with U.N. initiatives and underline that a federalist solution would be efficient in solving other regional problems, too, particularly tensions in the Eastern Mediterranean.

However, according to others, such as Tatar and Özersay, there may be other alternatives to the federalism. Although neither directly opposes a federalist solution, both express that tying hopes to such a plan would not be realistic, considering the complex past shared with the Greek Cypriot administration. Rather, they suggest a two-state solution and express a standing that is closer to Turkey, compared with Akıncı and Erhürman.

Secretary-General of the U.N. Antonio Guterres recently expressed that before any possible relaunch of diplomatic talks, the outcome of the TRNC elections ought to be announced, since the winning candidate may suddenly change the course of the island's future. He also signaled that as soon as elections took place, he planned to start a political process between the two conflicting parties, as well as the island's guarantor states of Turkey, Greece and the United Kingdom.

Guterres' statements, however, have not been welcomed in Turkey, as the country has warned that these words do not signal a beginning of a new set of negotiations and that, furthermore, the talks that came to a halt in 2017 could not continue from where they left off.

"There doesn't exist the common ground or vision needed for the two conflicting sides of the island to come up with a solution," the Turkish Foreign Ministry expressed.

It is commonly held in the TRNC that the Greek side is not willing to share either administrative power or the island's riches with the Turkish side. Thus, it is a constant debate for Turks on the island whether or not it is possible to have political equality with the Greek side and to share the resources of the island equally.

Some candidates, such as Tatar, defend the view that being more active with Turkey, both in terms of military cooperation and seismic research activities, would benefit the island's Turks in the long-run in establishing an equal atmosphere with the Greeks. Others, like Akıncı, however, suggest that an emphasis on military activities may increase the tension even further and turn the Cyprus crisis into a deadlock.

While it is still debatable how the presidential elections in Turkish Cyprus will affect overall tensions in the region, many pundits have highlighted that ties with Turkey are also one of the main criteria that differentiate candidates.

Over the past year, Akıncı has raised eyebrows for his increasingly anti-Turkey remarks, which received major media coverage from Turkey following his claim that the TRNC would become part of Turkey if it could not reunify with the Greek Cypriot administration.

"If this fails to happen," Akıncı said, "the TRNC will grow increasingly dependent on Ankara and could end up being swallowed up, as a de facto Turkish province," The Guardian cited Akıncı as saying February.

According to a Gezici Research and Polling Company survey involving 4,630 respondents, in July, 84.9% of Turkish Cypriots said they would like a president who sought close relations with Ankara.

Some 83.6% of Turkish Cypriots responded that Ankara's guarantor status "should continue as is," while 5.9% said "it should end," and 5.5% said they felt the "European Union and the U.N. should be guarantors."

On the other hand, a January 2020 survey by the same company pointed to Tatar as the candidate with the highest chance of winning the race, with 34.2% of the votes.

Akıncı, with 28.8% of the votes, closely followed. The survey also predicts that a second round will take place as a result of these percentages, where Tatar and Akıncı will race and Tatar may eventually win.