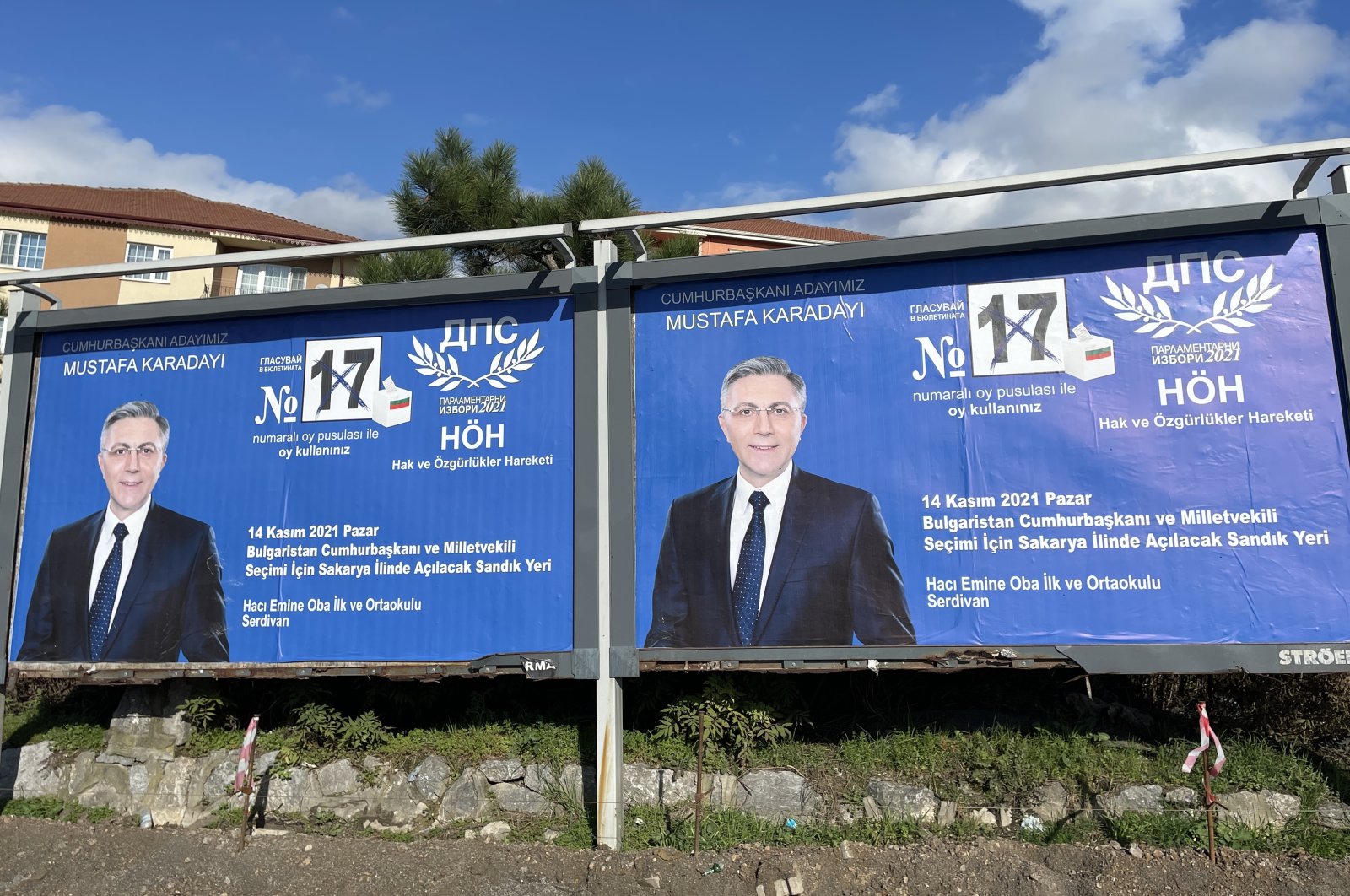 An election banner calling the on the Turkish minority in Bulgaria to vote for Movement for Rights and Freedoms candidate Mustafa Karadayı in presidential elections, Bulgaria, Nov. 11, 2021. (AA Photo)
by Anadolu Agency Nov 12, 2021 12:38 pm
RECOMMENDED

Erdoğan hits out at opposition copying him, lack of vision

A candidate of Turkish descent for the first time will run in Bulgaria's presidential elections set to take place Sunday.

The Movement for Rights and Freedoms (MRF) party nominated Mustafa Karadayı to run for president.

For Sunday's presidential and parliamentary elections, nearly 12,000 voting centers will be set up in the country and Bulgarian citizens living abroad, including in Turkey, will be able to vote at 775 other centers.

Hasan Azis, the MRF's deputy chairperson and mayor of Kardzhali, a province with a dense Muslim and Turk population, called on citizens to vote wisely.

Since Azis is not allowed to speak Turkish during the campaign in accordance with Bulgaria's election laws, he spoke to Anadolu Agency (AA) in Bulgarian.

He noted that for the first time in 32 years, a candidate of Turkish descent had been nominated for the presidency.

"These elections are a historic moment in the democratic development of both our party and Bulgaria. We are in favor of supporting our candidate. We expect this support both in Bulgaria and in Europe, the U.S. and Turkey where Bulgarian citizens reside," said Azis.

Azis said that MRF has proven itself to be a political party with national responsibility since the day it was founded and it supports Bulgaria's NATO and European Union membership.

"Of the 24 presidential and vice-presidential candidates in Bulgaria, only the MRF has nominated Karadayı and (European Parliament Deputy Iskra) Mihaylova, an ethnic Turk and an ethnic Bulgarian, as the symbol of our nation's unity.

"Why shouldn't an ethnic Turk like Mustafa Karadayı be elected in Bulgaria? I think the Bulgarian society and all of us are ready for this now," he said.

Meanwhile, Turks living in Bulgaria hope for an egalitarian president, who prioritizes the interest of the people.

Businessperson Metin Hasan told AA that he expects the president to treat everyone equally.

"I expect the president to approach the people with warmth, not by raising a fist in the air, but by embracing the public," said Hasan.

Mümin Çavuşoğlu, a 70-year-old retired worker, said that Turks were living in captivity during the deposed communist dictator Todor Jivkov's era decades ago.

"May Allah bless the MRF. They showed up, and we began to live like human beings. People should have religious beliefs. They should recognize the rights of everyone. We, as Turks, want to live our Turkishness here like a Turk," Çavuşoğlu said.

Erdoğan hits out at opposition copying him, lack of vision