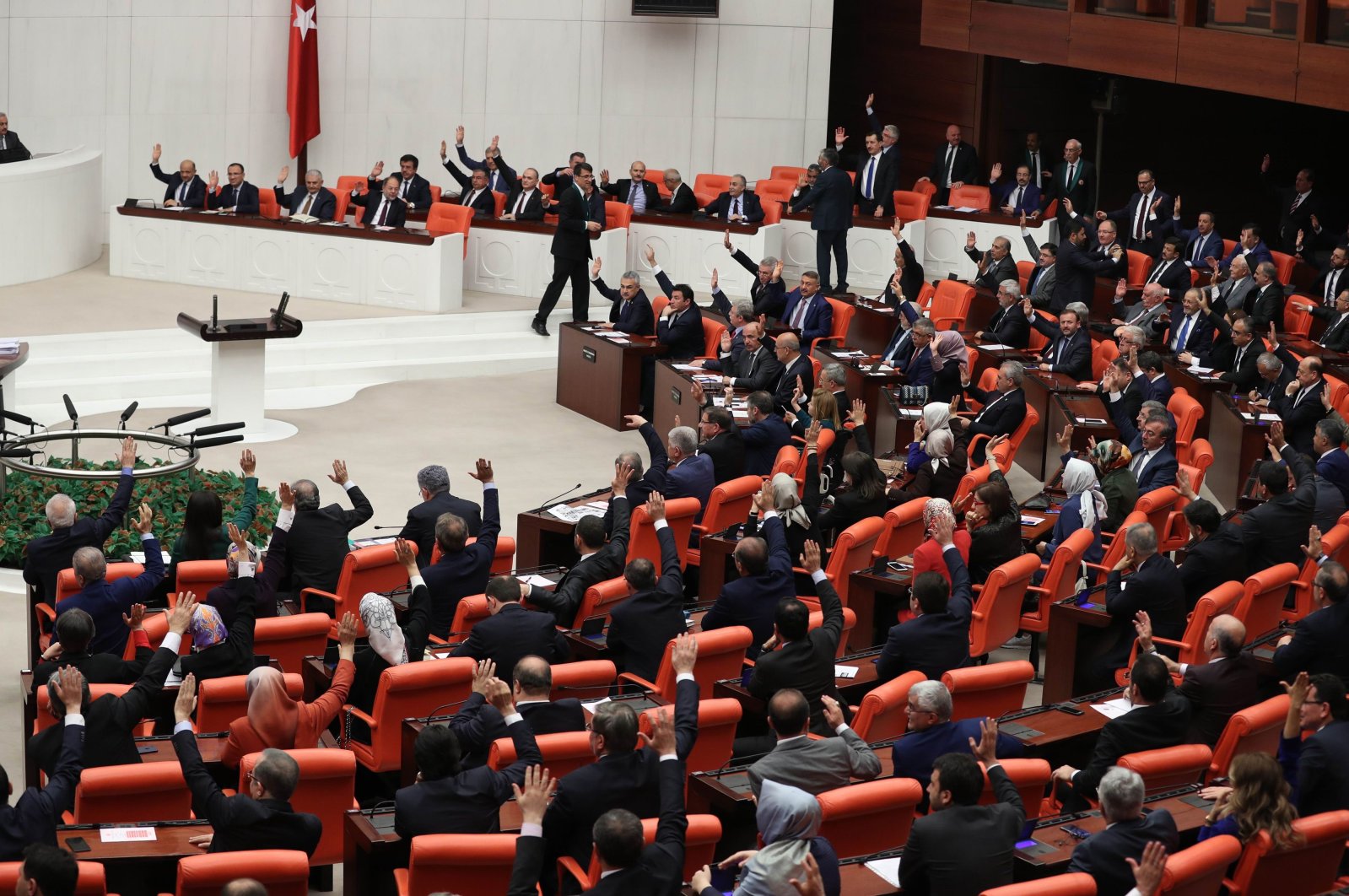 Turkish deputies take part in a vote for the proposed early presidential and parliamentary elections during the general assembly of the Grand National Assembly of Turkey in Ankara, Turkey, April 20, 2018. (AFP Photo)
by Zübeyde Yalçın Feb 11, 2021 1:43 pm

The ruling Justice and Development Party (AK Party) completed preparations for a new amendment to the election law, presenting it to President Recep Tayyip Erdoğan. The bill will be shared with the Nationalist Movement Party (MHP) once it takes its final shape after Erdoğan’s review. Representatives from both parties will come together and prepare a joint final proposal to be submitted to Parliament.

The amendment proposal includes numerous modifications on elections, which have been discussed for a long time by all factions of Parliament. Lawmakers, for example, are considering reducing the election threshold from 10% to 7%. The move will enable smaller parties to enter elections without necessarily looking to form an alliance.

The current 10% threshold and the highest averages method, known as the D'Hondt method, were introduced with the 1982 Constitution, which was adopted in a referendum after the 1980 military coup. Despite the fact that the AK Party promised a few times to remove the threshold during the last decade, no steps have been taken so far on the issue.

Another recent controversial issue in the political arena is the pro-PKK Peoples' Democratic Party (HDP). The MHP, the AK Party’s ally in the People’s Alliance election bloc, has been calling for the closure of the party due to its terrorism links, an offer that has been glossed over by the ruling party. Some AK Party officials claimed that party closures have no place in a democracy and have not worked in the past. “We witnessed that party closure did not yield positive results,” AK Party Deputy Chair Numan Kurtulmuş said in December. The issue is still a matter of controversy between allies and will possibly cause more disputes. However, the AK Party will likely add a condition in the new law that makes it impossible for terror-linked parties to receive money from the state budget.

The People’s Alliance will touch upon the issue of resigned deputies, which has also brought about numerous controversies in recent years. According to the recent law, a newly established party must have 20 deputies to form a parliamentary group. Before elections in 2018, for instance, 15 deputies resigned from the main opposition Republican People's Party (CHP) and joined the Good Party (IP) to grant the latter the right to participate in the snap elections as the nascent party did not meet the requirements to participate in the polls. The deputies returned to the CHP after the elections, and it was a move that was strongly criticized by the AK Party and the MHP. The new law will not completely block such strategies. However, party quotas in Parliament commissions would be determined according to election results and will not change based on the changing number of deputies due to resignations and transfers.

A change in the election system is unlikely, according to pundits. The AK Party previously pondered some alternative systems including the single-member district election system. This system envisages the division of Turkey into exact polling districts – 600, for instance, the recent deputy number in Parliament – and each district would vote for one deputy. The system is already being applied in the U.K.