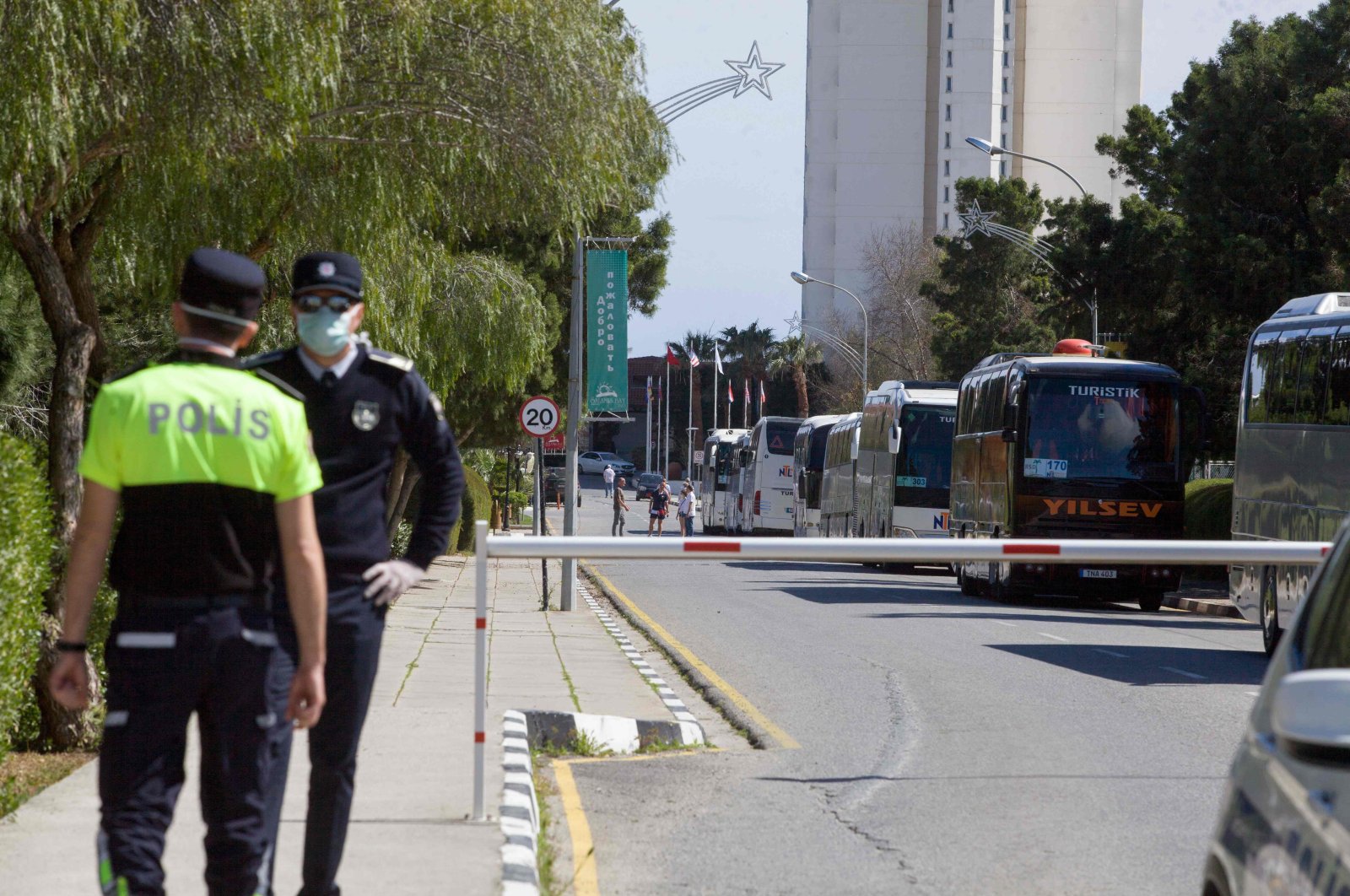 Police officers wearing protective masks stand guard at an entrance of the Salamis Bay Conti Hotel, under quarantine due to the novel coronavirus outbreak, in the eastern Cypriot port city of Famagusta in the Turkish Republic of North Cyprus (TRNC), March 10, 2020. (AFP)
by Daily Sabah with AFP Mar 20, 2020 10:26 am
RECOMMENDED

Lawmakers in northern Cyprus voted Thursday to postpone the Turkish Cypriot presidential election, scheduled for April 26, for six months amid the coronavirus outbreak.

The 10th election of the republic is now expected to be held on Oct. 11, and incumbent president Mustafa Akıncı will remain in office in a caretaker capacity until then.

Akıncı is the fourth president of the Turkish Republic of Northern Cyprus (TRNC), a position he has held since 2015.

He is also leader of the Turkish delegation for on-and-off-again, U.N.-backed reunification talks with the leader of the Greek Cypriots, Nicos Anastasiades.

Originally an architect, Akıncı’s political career began with his mayorship of the Turkish side's capital province of Nicosia, which lasted for 14 years. He was a member of the Communal Democracy Party, which was founded in 2007 with an emphasis on social democracy and a united Cyprus, until his 2014 resignation. In 2015, Akıncı ran in the presidential elections as an independent candidate and won after receiving 60.5% of the second-round votes. During his presidency, he has emphasized the resolution of the Cyprus issue and restarted negotiations with Anastasiades.

Akıncı is not the only candidate in the upcoming elections, however, as there are six others challenging him. Another presidential candidate is the country's current prime minister, Ersin Tatar. A Cambridge communications graduate, Tatar’s political career gained momentum back in 2009 when he became the finance minister of the TRNC. He has been prime minister of the country since May 2019 and is also the head of the National Unity Party, the national conservative party founded in 1975.

Tufan Erhürman, another presidential candidate, leads the center-left Republican Turkish Party (CTP). He has been a TRNC deputy since 2013 and head of the CTP since 2016. He became the prime minister of the TRNC in 2018 and remained in the office until May 2019.

The current foreign minister and deputy prime minister of the country, Kudret Özersay, is also among the candidates for the 2020 presidential race. An academic and lawyer, Özersay has made a name for himself, mostly for his influential role in Cyprus negotiation talks he has participated in for more than 12 years.

Head of the Rebirth Party, Erhan Arıklı, will also run. An academician and author, Arıklı has taken part in various diplomatic missions for the TRNC, including being the Central Asia representative of the country.

Other candidates include Arif Salih Kırdağ and Ahmet Boran, both of whom will race independently.

The TRNC selects its president in a two-round election. If a candidate fails to win in the first round, the second round takes place in a runoff with only the top two leading candidates.

According to a January 2020 survey by the Gezici Research Company, Tatar is the candidate most likely to win the race, as he has received 34.2% of the votes in the study.

Akıncı, with 28.8% of the votes, closely followed Tatar. The survey also predicts that a second round will take place as a result of these percentages, where Tatar and Akıncı will face off with Tatar eventually winning.

On Thursday, Turkish Cypriot authorities closed all points of entry to nonresidents in the latest round of preventive measures against the coronavirus.

The number of COVID-19 cases in the TRNC has risen to 33, while the Republic of Cyprus has confirmed 67, making an island-wide total of 100.

No deaths have so far been reported.