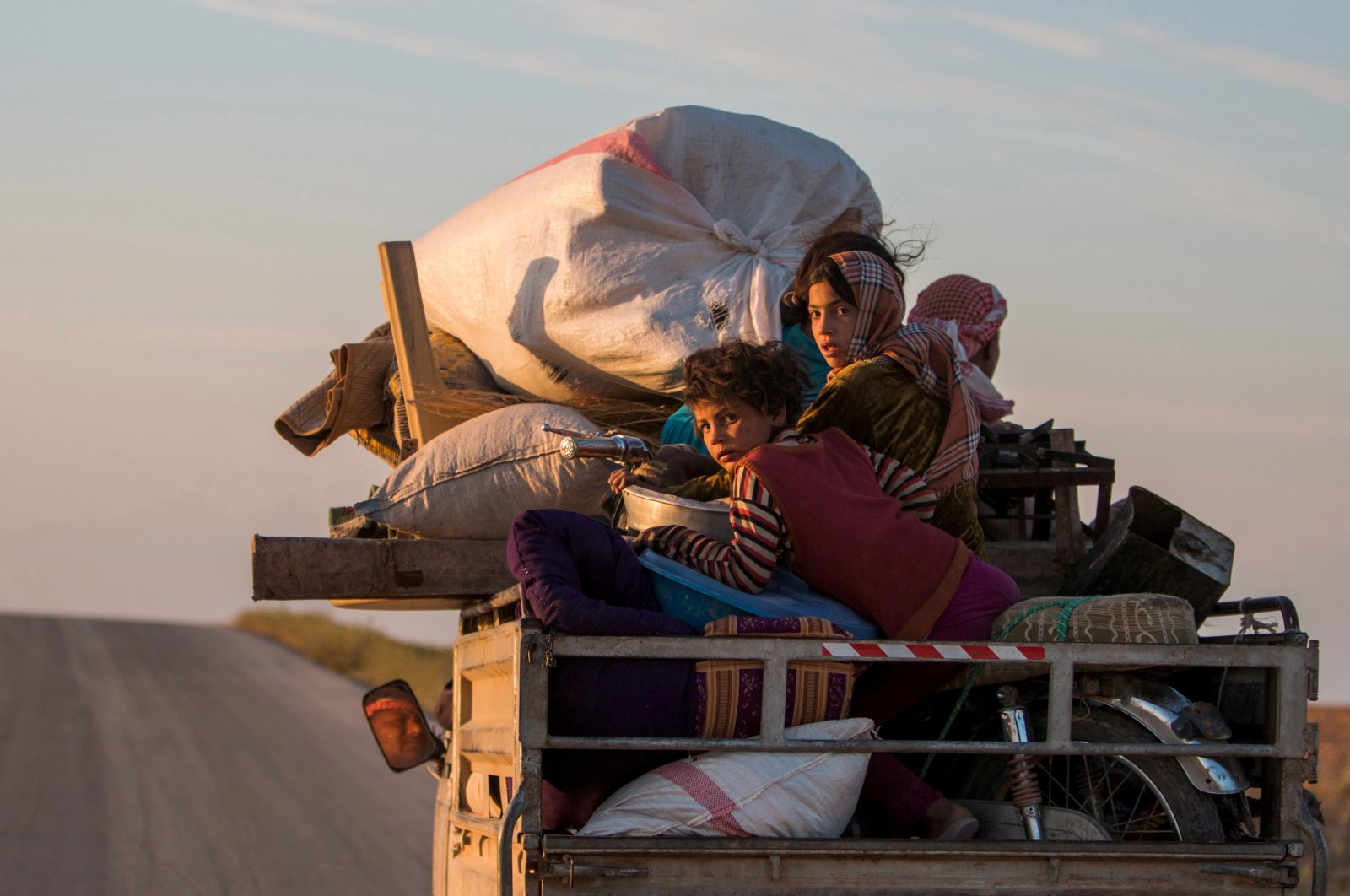 As the Syrian war leaves nine years of humanitarian suffering and a staggering amount of displacements in its wake, the U.N. calls on the international community to increase efforts

Syria's ongoing conflict enters its 10th year on Sunday, with Bashar Assad's regime still seeking to consolidate its hold over the war-ravaged country, at best unmoved by the ongoing suffering of his people.

According to the United Nations, the war has caused the flight of least 5.6 million Syrian refugees, while 6.1 million internally displaced people have been seeking refuge either in other countries or areas near the Turkish border. Up to 70% of the health workforce in the country has left, while 500,000 children are chronically malnourished.

When Syrians took to the streets on March 15, 2011, they could scarcely have imagined their anti-government protests would turn into such a protracted conflict. At least 384,000 people have since died, including more than 116,000 civilians, the Syrian Observatory for Human Rights war monitor said Saturday.

Thanks to the support of Russia, starting in 2015, as well as backup from Iranian-backed militias, the regime has clawed back control of over 70% of the country, constituting a turning point in the war. The latest surge in violence has been directed at the northwestern province of Idlib, an area marked out as the last opposition stronghold against the Assad regime. When the regime in December started an assault on the province to take back control, it caused nearly a million people to flee the area and the daily deaths of civilians. As a result, Turkey, which has the second-largest army in the transatlantic NATO alliance, has funneled troops and equipment into the region in recent weeks to stop the Syrian regime advance and avoid another wave of refugees.

This was followed by a cease-fire brokered by Turkey and Russia on March 5 this year, and airstrikes in northwest Syria reportedly came to a halt while limited instances of shelling have been reported along the frontlines.

Regime forces and Russian warplanes have heavily bombarded the region for months, killing nearly 500 civilians, the Observatory says, and forcing nearly a million to flee, according to the U.N.

The U.N. special envoy for Syria, Geir Pedersen, said on the eve of the anniversary: "The suffering of the Syrian people during this tragic and terrible decade still defies comprehension and belief."

“Hundreds of thousands of Syrians, men and women, have lost their lives. Hundreds of thousands have been detained, abducted or are missing. Human rights abuses, crimes, destruction and destitution have taken place on a monumental scale. Half the population has fled their homes. And with close to a million people newly displaced due to heavy violence in the past three months in the Idlib area alone, the tragedy is deepening,” Pedersen warned Saturday in a written statement on the U.N. website.

The U.N. envoy stressed that the fate of the Syrian people is linked to the international community, which was previously frequently criticized by Turkey and the U.N. for its silence in the face of the regime's violence against civilians.

Turkey, as the country hosting the largest number of Syrian refugees in the world, has long been striving to achieve peace and stability in the country, calling on international actors to take action against the humanitarian disaster unfolding there each day and launching the Sochi and Astana processes for peace talks. Turkey has also frequently warned other countries of a new refugee wave if relentless attacks on the de-escalation zone continue. Within this scope, Turkey has launched several cross-border operations both to fight terrorist groups active in the country and to enable the safe return of Syrians by establishing a safe zone.

“The horrific and enduring nature of the conflict is proof of a collective failure of diplomacy,” he continued, adding that the international community must demonstrate a renewed sense of urgency in supporting the Syrians in finding a U.N.-facilitated political solution as set out in Security Council Resolution No. 2254 (2015) – the only framework that enjoys legitimacy and support of the entire international community.

The humanitarian needs, especially the country’s northwest, are vast, but the most acute emergency needs are shelter, water, sanitation and hygiene, food and protection, according to the U.N. Other needs with longer-term impacts are becoming more apparent, such as malnutrition and stunting, the lack of education and the loss of access to over 150,000 hectares (370,658 acres) of arable land.

“The war in Syria marks yet another shameful milestone today,” said in a press release on the instiution's website, UNICEF Executive Director Henrietta Fore, who was in Syria last week. “As the conflict enters its 10th year, millions of children are entering their second decade of life surrounded by war, violence, death and displacement.”

Citing data from 2014, when official monitoring began, up to that year UNICEF said that more than 9,000 had been killed or injured in the conflict and that "close to 5,000 children – some as young as 7 – had been recruited into the fighting, while nearly 1,000 education and medical facilities had came under attack." At the time, the agency warned that the “true impact of this war on children is likely to be more profound”.

Ted Chaiban, UNICEF regional director for the Middle East and North Africa, said an ongoing offensive by government forces on the last opposition stronghold in northwestern Syria was having “severe consequences on children" and that as a result of the wider impact of the conflict, “more than 2.8 million children are out of school inside Syria and in neighboring countries.”

Two in five schools have been rendered beyond use due to sustained damage from weapons or due to having been used for military or humanitarian purposes, said UNICEF.

Addressing warring parties, Fore said: “Our message is clear: Stop hitting schools and hospitals. Stop killing and maiming children. Grant us the crossline and cross-border access we need to reach those in need. Far too many children have suffered for far too long.

The war has also ravaged Syria’s economy and infrastructure, with the Assad regime and Russia randomly bombarding civilian settlements, hospitals and even schools. The United Nations estimated in 2018 that the conflict had caused nearly $400 billion in war-related destruction.

"Basic services, hospitals and schools need to be rebuilt" across the country, the International Committee of the Red Cross said Saturday in a written statement on their website. "Houses and land need to be cleared of unexploded ammunition. Jobs and other sources of income need to be created and maintained."

Medical facilities have been hit especially hard during the conflict as the Assad regime and Russian forces fail to make distinctions between ordinary buildings and health facilities during attacks. The World Health Organization (WHO) has frequently voiced that several hospitals and health care centers have had to suspend work and evacuate the area for their own safety.

Apart from the constant Russia-backed regime bombardments and shelling that has been intensifying since last April last year, the people of Syria have also endured several chemical weapon attacks and torture, with many people having gone missing.

The Syrian Human Rights Network (SNHR) announced last year that over 14,000 civilians have died of torture since the beginning of the civil war in Syria in 2011.

"Some 14,227 individuals, including 177 children, 62 women, died of torture at the hands of main parties to the conflict in Syria between March 2011 to June 2019," according to the SNHR report, which marks the International Day in Support of Victims of Torture, falling on June 26. Torture by the Assad regime forces made up 14,070 of this number, including 173 children and 45 women. The report stressed that the figures consisted of only those that can be identified and that the real death toll is much higher.

Furthermore, a total of around 250 chemical attacks have been carried out in the country, mostly by the Assad regime. The regime conducted its first major chemical attack on Aug. 21, 2013, in the Eastern Ghouta region of Damascus. The attack, which killed over 1,400 civilians raised international concerns at the time.

During the process, the Organization for the Prohibition of Chemical Weapons (OPCW) requested the annihilation of all stock for chemical weapons and on Aug. 19, 2014, announced that this process had been completed. Yet, as was understood that with the attack in Khan Sheikhoun on April 4, 2017, the regime still had chemical weapons. Over 100 civilians lost their lives in the attack and more than 500 people were affected by the gas.