Erdoğan: Foreign mercenaries root of bloodshed in Libya, should be eliminated immediately 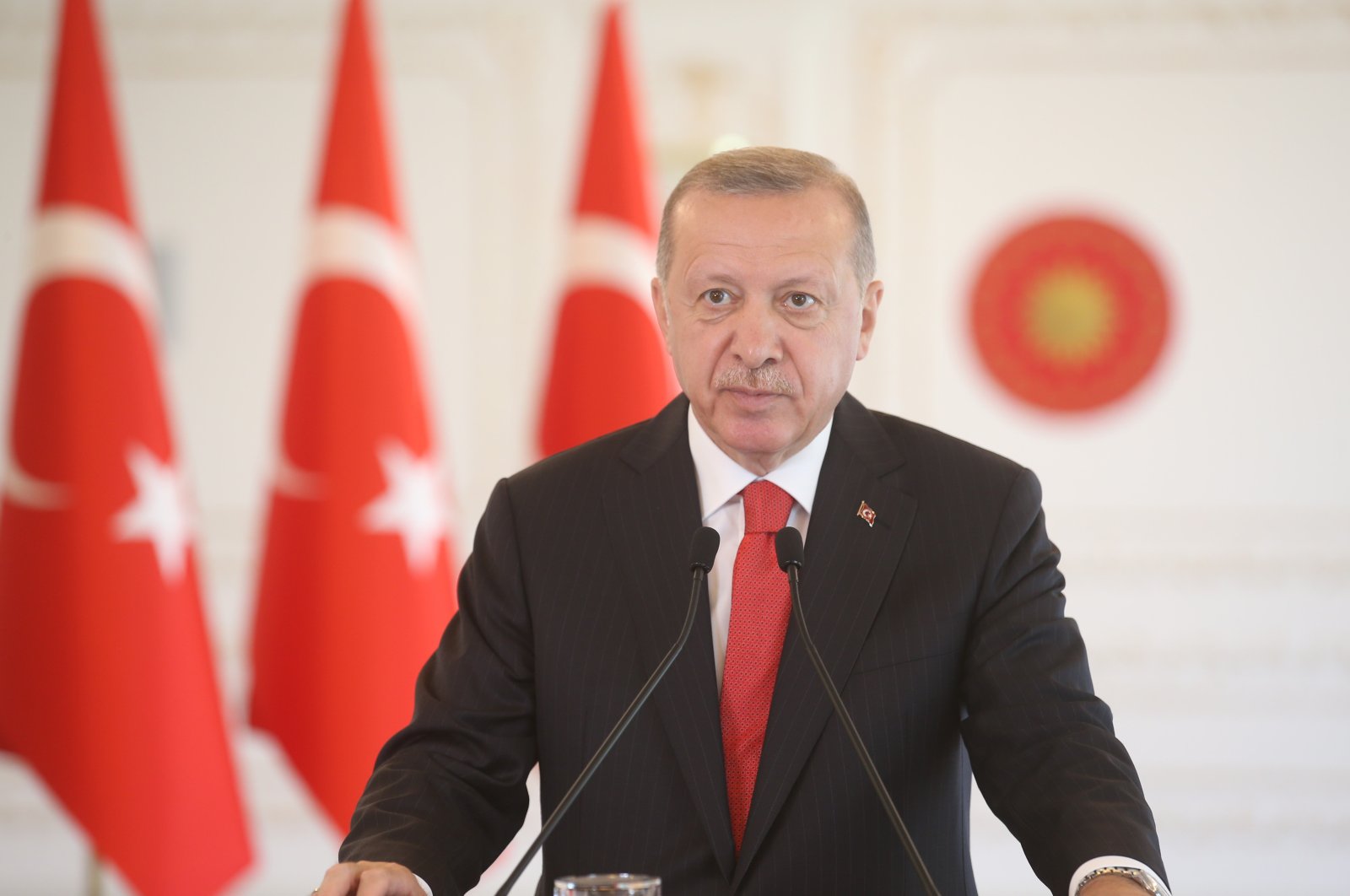 President Recep Tayyip Erdoğan speaks at the inauguration ceremony of a hydroelectric power plant in Turkey's northern province of Tokat, which he attends via videoconference, July 10, 2020. (IHA)
by DAILY SABAH Jul 12, 2020 1:32 pm
RECOMMENDED

The foreign mercenaries who turned Libya into a "bloodbath" will be removed from the war-torn country in no time, President Recep Tayyip Erdoğan said on Sunday.

Speaking in an exclusive interview with Turkey's Kriter Magazine, the president highlighted Ankara's mission in Libya, the Eastern Mediterranean, the fight against terrorism, measures against the coronavirus and more.

"The international community should make a choice to support the legitimate government of Libya and stop the putschists who commit war crimes. The mercenaries who turned the country into a bloodbath should be removed at once," the president said.

Libya has been torn by a civil war since the ouster of Moammar Gadhafi in 2011. The country's new government was founded in 2015 under a United Nations-led agreement, but efforts for a long-term political settlement failed due to a military offensive by putschist Gen. Khalifa Haftar's forces.

The U.N. recognized Libyan government is headed by Fayez Sarraj in Tripoli.

Libya launched Operation Peace Storm against Haftar in March to counter attacks on the capital that started in April 2019 and recently liberated strategic locations including the al-Watiya air base and the city of Tarhuna, the putschist's final stronghold in western Libya. Despite constant calls for a cease-fire from the international community, the conflict continues to escalate due to the involvement of foreign mercenaries, particularly those sent by Russia, the United Arab Emirates (UAE) and France, who are the main backers of Haftar.

"Thanks to Turkey's firm stance, Haftar and its backers' plan to invade Tripoli has failed," said Erdoğan, adding that the achievements of the Libyan Army against the militia "hopefully" herald in a peaceful future for the country.

Emphasizing the importance of two agreements signed between Turkey and Libya last November, the president expressed that the deals guarantee both countries' rights in the Eastern Mediterranean, while also securing Libyans' future. The landmark pacts cover issues such as military cooperation and boundaries in the Mediterranean.

Under the deal, Turkey sent advisers to help the Libyan Army defeat Haftar's militias. "Having stability as soon as possible in Libya benefits not only the Libyan people but the whole region," he said.

Regarding developments in the Eastern Mediterranean, the president expressed that some countries, including Turkey's neighbors, are attempting to seize Ankara's rights in the region.

"We have repeatedly stated that this is wrong and unlawful," Erdoğan stated, adding that with the steps taken, Turkey has countered these false attempts and sent two drilling ships to the region.

"I say this loud and clear: We do not want any tension in the Mediterranean, which has been host to various civilizations throughout history," the president said, indicating that the hydrocarbon resources in the region would be beneficial for the entire basin.

Erdoğan added that Turkey is open to any offer that is based on cooperation and a fair share of resources.

The agreement with Libya brings a new perspective to Turkey's shoreline in the region. From a three-dimensional viewpoint, it maximizes the country's maritime boundaries and shows that Turkey's border districts of Marmaris, Fethiye and Kaş are actually neighbors to Libya's Derna, Tobruk and Bardiya districts.

Turkey has the longest shoreline in the Eastern Mediterranean, making it a natural candidate for seeking reserves in the region in accordance with international law. Despite this fact, no country outside of Libya has consulted or engaged in dialogue with Ankara about drilling activities. Still, until very recently, Turkey expressed a willingness to establish dialogue channels with various regional countries, but its attempts fell flat without response.

July 15: A milestone in democracy

As the interview took place a couple of days before the fourth anniversary of the failed coup attempt of July 15, 2016, Erdoğan also touched upon the date's importance for the country's democratic history.

"July 15 was a turning point in terms of cutting the tutelage chains of the nation's will. That night, our entire nation, both men and women, youth and elders, laid claim to their will, future and state," he said.

Reminding that July 15 also revealed the true nature of the Gülenist Terror Group (FETÖ), Erdoğan said "we are living freely in our lands today, thanks to the ones who sacrificed their lives that night."

Turkish people are familiar with coups as they have suffered several of them. In 1960, 1971, 1980 and 1997, the country's power was taken by the military from civilian authorities under the pretext of preserving the regime and certain values like secularism.

Four years ago, people once again saw military vehicles and soldiers on their streets. The state television broadcaster, Turkish Radio and Television (TRT), was raided by putschists and it was announced that the military was in power. This time, however, it was a bit different from previous coups. Erdoğan made an announcement saying that all officials of the Turkish Armed Forces (TSK) were not involved in the coup but it was orchestrated by a specific group, FETÖ. Some 251 people were killed and nearly 2,200 were injured in the attempt. Erdoğan's call for resistance was welcomed by the people as thousands took to the streets to thwart the attempt.

Regarding the fight against FETÖ, Erdoğan said the terrorist group has, to a large extent, been eliminated from the military, enabling the army to revive itself.

"Of course, it is not possible to completely eliminate a sneaky structure that has been trying to infiltrate state structures for 40 years. However, our security and judicial forces have been finding new evidence every day and even uncovered the crypto structure of the group," the president emphasized.

PKK has no future in Turkey

"We will not allow terrorism to be the destiny of these lands," Erdoğan said, referring to the decadeslong fight against the PKK terrorist group.

Reminding about the successful counterterrorism operations in Syria and northern Iraq, the president expressed that significant steps have been achieved against the YPG/PKK, as well as the Daesh, in recent years. "There is no place for PKK in our region's future," he highlighted.

Turkish security forces regularly conduct counterterrorism operations in the eastern and southeastern provinces of Turkey, as well as Syria and northern Iraq, where the PKK and its affiliates have attempted to establish a strong presence.

Emphasizing the importance of the defense industry's role in the fight against terrorism, Erdoğan said that 350 new projects were launched over the past five years.

"Turkey's self-sufficiency level in the defense industry has increased from 20% to above 70% (over the past decade). There were only 62 defense industry projects back in 2002. This number has reached 700 projects today," the president expressed.

Erdoğan, referring to the country's military drones as the nation's most significant defense industry projects, said that Turkey will be among the top four countries in the field with its production of the Bayraktar Akıncı.

Turkish defense companies have reached significant economic achievements, a success that is being reflected on international comparison lists. Four domestic defense firms were listed among the world's leading companies in the sector, according to a list published by Defense News Top 100 – a U.S.-based magazine that tracks the global defense industry.

Turkey's largest defense electronics company, ASELSAN, ranked 52nd on the list with $1.8 billion in defense revenue, while Turkish Aerospace Industries (TUSAŞ) was listed in the 69th spot with $1.05 billion. Turkey's Defense Technologies Engineering and Trade Inc. (STM) was 85th on the list with $564.8 million and Roketsan at $522.8 million ranked 89th.

As far as the country's economy is concerned, Erdoğan stated that Turkey will turn this "problematic" period into an advantage, mainly referring to the troubles caused by the pandemic.

Noting his 18 years of efforts regarding the country's economy, the president expressed that per capita income has risen from $3,500 to $11,000 during this period while the country's exports increased from $36 billion to $181 billion.

Turkey's exports in June surged by 15.8% year-on-year, registering a 35% month-on-month increase and bouncing back from a decline due to the coronavirus pandemic.

"We are the 13th biggest economy in the world when it comes to per capita income according to purchasing parity," the president highlighted.

The government in March announced a support package for citizens and businesses against the side-effects of the pandemic, postponing debt payments and reducing tax burdens in some sectors. Since then, Ankara has gradually expanded the measures. The financial support under the package now exceeds TL 280 billion (over $40 billion), Treasury and Finance Minister Berat Albayrak recently said.

When he was asked how Turkey has coped with the coronavirus, Erdoğan said that the country has one principle, "Let people live so that the state would live as well."

"Unfortunately, many countries have been caught off-guard by the pandemic, and are having trouble meeting their citizens' needs," he said, underlining that Turkey has become one of the countries that handled the outbreak "smoothly."

"We have provided everything that is required to fight against the coronavirus, including tests, treatments and medicine, freely to our people," he highlighted.

Erdoğan added that apart from meeting its own citizens' needs, the country also has provided 140 virus-hit countries with medical equipment.

"Thank God, many continents, from Brazil to Somalia, has been using Turkish-made ventilators," the president said, adding that 17 medicine development projects, eight of which are vaccines, are still ongoing.

The president also expressed that in this difficult period when the value of health is finally being appreciated, he believes Turkey has an advantage and will be a center for health tourism.

As the fight against the pandemic continues, Turkey has come to the forefront as a humanitarian leader while still maintaining its domestic success against the coronavirus. Almost two-thirds of the world have requested medical supplies from Turkey in their fight against COVID-19 and nearly half of these requests have been met.

Erdoğan also touched upon the Israeli occupation of Palestinian lands, stating that the "global silence" toward the country's actions is the one that enables human rights violations.

"The world should say stop to these developments and prevent Israel from taking unlawful steps," he said, adding that Turkey's main policy on the issue is centered around the establishment of an independent Palestinian state based on the borders of 1967.

"Any other peace plan will not be fair and thus cannot be accepted or executed," the president highlighted.

Erdoğan further emphasized that it is the duty of the Muslim world to prevent Israel from violating the status of the al-Aqsa Mosque.

"We do not have any problem with Jews or the Israeli people. What we are against is the occupant and unlawful policies of Israel," he stated.

Palestinians have long suffered from the ongoing risk of demolition by Israeli forces. In December 2019, Israel planned to bulldoze some 18,000 Palestinian homes in Jerusalem. Such actions have been called "war crimes" by the International Criminal Court (ICC). Israeli military forces last year raised a school in a Bedouin community in the West Bank city of Hebron, wrecking hope and the means to education for Palestine's youth.