Erdoğan: Hagia Sophia to open for worship on July 24 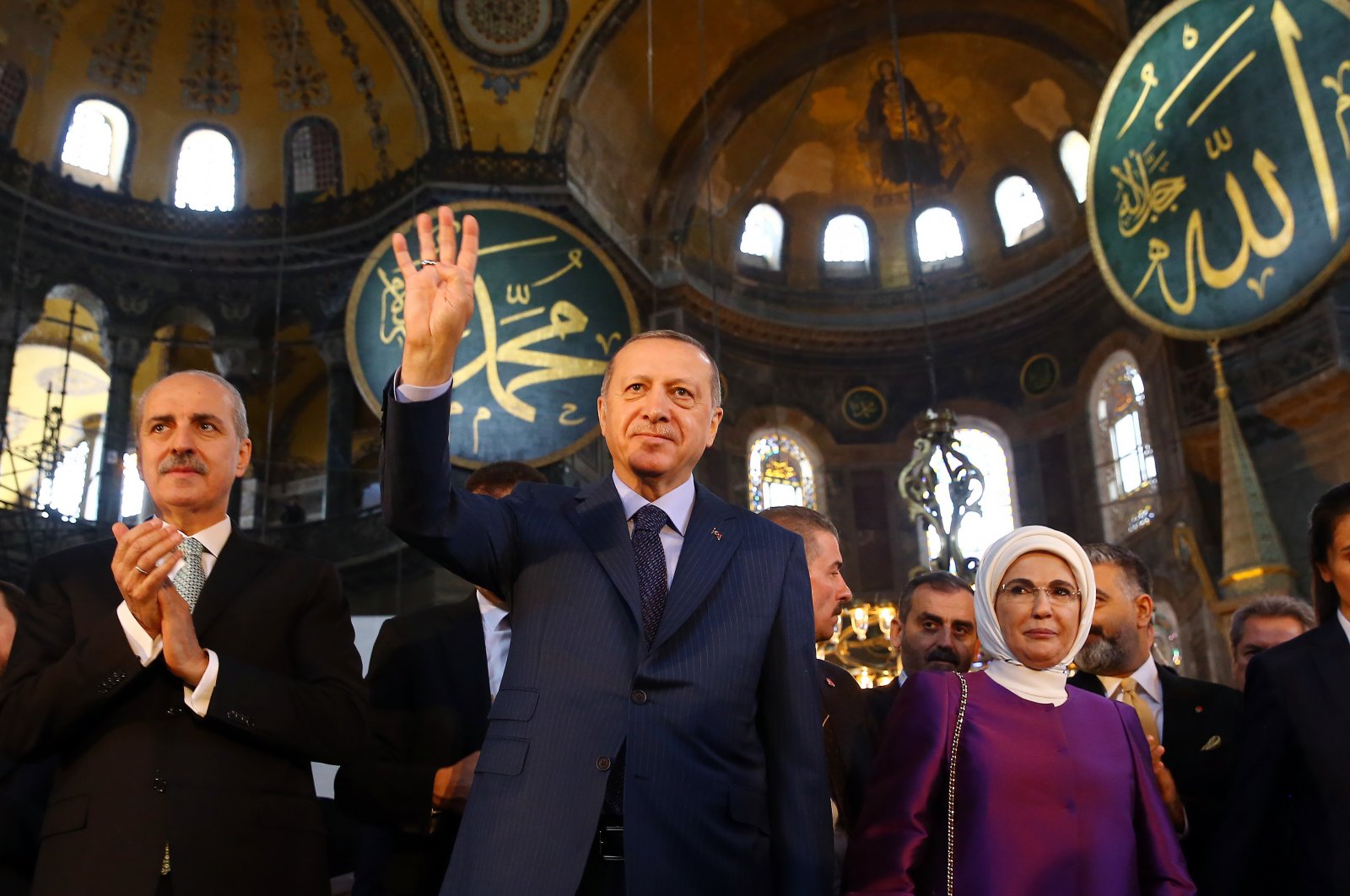 In a speech broadcast live hours after a presidential decree was issued for the reversion of Istanbul's iconic Hagia Sophia from a museum into a mosque, President Recep Tayyip Erdoğan said it will open for worship on July 24.

“As with all other mosques, the doors of Hagia Sophia will be open to all, including Turkish citizens and tourists. We are planning to open Hagia Sophia Mosque for worship on July 24. Hagia Sophia is under Turkish jurisdiction. Any objection to our judiciary's decision will be perceived as a breach of our sovereignty,” Erdoğan said.

Upon the court’s ruling, Erdoğan signed a presidential decree to hand over Hagia Sophia to Turkey's Presidency of Religious Affairs and open for worship while congratulating the Turkish people.

The court stated that Hagia Sophia is officially registered as a mosque in its deed, adding that it was decided its use for anything other than a mosque was legally not possible. "The Cabinet decision in 1934 that ended its use as a mosque and defined it as a museum did not comply with laws," it said.

The Permanent Foundations Service to Historical Artifacts and Environment Association, an Istanbul-based nongovernmental organization, had filed a petition at the 10th Chamber of the Council of State seeking annulment of the decision to revert Hagia Sophia into a museum after being a mosque for nearly 500 years. The court heard the parties' arguments at a July 2 hearing before issuing its ruling.

The petition said Hagia Sophia was the private property of Ottoman Sultan Mehmed II, who in 1453 captured Istanbul and turned the religious structure into a mosque.

In his speech that started at 8:53 p.m. local time, in an apparent reference to 1453, the year Istanbul was conquered by the Ottomans, Erdoğan said the first prayers to be performed inside the new mosque would be Friday prayers. Just as he was speaking, a group of activists were performing evening prayers outside the Hagia Sophia. The president called the public not to rush to visit in order to not delay preparations for reopening. He said it would take another six months to finalize all preparations.

“Turkish nation’s rights on Hagia Sophia is no less than the right of those who built it 1,500 years ago,” Erdoğan said, in a veiled criticism of other countries denouncing the reversion of museum into mosque. “The history is witness to our struggle to bring tolerance to everywhere our nation conquered. Today, we have 435 churches and synagogues open for worship. Despite this, we saw the contrary elsewhere. Few buildings our ancestors built in Eastern Europe and Balkans stand today,” he said.

After reciting poems and essays by Turkish authors and thinkers that praised Hagia Sophia and called for its reversion to a mosque, Erdoğan said the structure would be a symbol for the world again. “Resurrection of Hagia Sophia is a harbinger of al-Aqsa Mosque’s liberation,” Erdoğan said, in reference to iconic mosque in Jerusalem where Palestinian Muslims are often barred from praying by Israel.

Hagia Sophia, one of the world’s most important historical and cultural heritage sites, was built in the sixth century during the reign of the Byzantine Empire and served as the seat of the Greek Orthodox Church. It was converted into an imperial mosque with the Ottoman conquest of Istanbul in 1453. The structure was converted into a museum during the strictly secular single-party rule in 1935, but there have been discussions about reverting it to a mosque, with public demand to restore it as a place of worship gaining traction on social media.

The opposition parties also lauded the move to revert Hagia Sophia. Lawmakers gave an applause when the presidential decree was recited at the parliament. The ruling Justice and Development (AK) Party group chair in the parliament Özlem Zengin said it was a historical moment and thanked President Erdoğan.

Devlet Bahçeli, head of the Nationalist Movement Party (MHP) said in a written statement that his party was “pleased” with the court’s ruling. “It has long been our desire for Hagia Sophia to be opened for worship. It is a historic day. Countries which lined up to damage our religious rights, our sovereignty gains lost,” he said, in reference to opposition to the reversion from several countries including Greece. Bahçeli noted that the decision met the legitimate and righteous demand of the Muslim Turkish nation.

Temel Karamollaoğlu, head of Felicity Party, said he appreciated the court ruling. “This is a verdict that complies with our nation’s demand,” he said, thanking everyone fighting for a legal action for reversion of Hagia Sophia. Mustafa Destici, head of Great Union Party (BBP) said in a written statement that “chains were broken” with the reopening of the Hagia Sophia as a mosque. “I thank Council of State for this fair verdict and our president for immediately doing what is necessary (for the reversion),” he said.