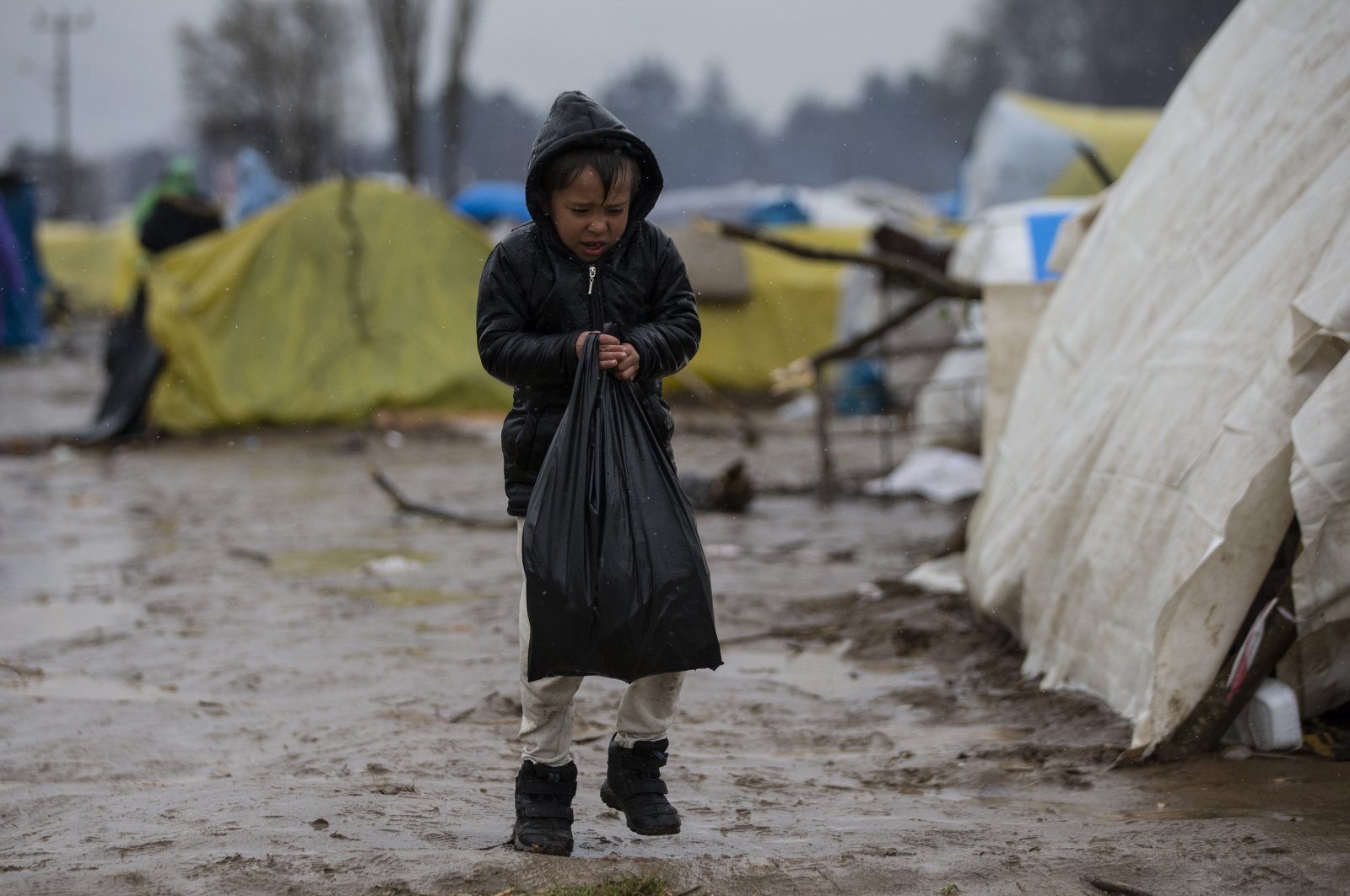 Refugees continue to wait to be taken in by Europe at the Turkish-Greek border on their 18th day despite harsh weather conditions, March 15, 2020. (AA Photo)
by Dilara Aslan Mar 16, 2020 12:25 pm
Edited By Dilara Aslan

Amid coronavirus panick spreading across Europe, the EU has to solve the refugee crisis waiting at its door while only tackling the refugee issue will possibly not solve the root of its cause: the Syrian war

The urgent issue of the recent refugee crisis, with thousands waiting to be taken in at the European Union’s southern border, has been overshadowed by internal pressure on the bloc amid the coronavirus outbreak, which has hit the EU especially hard. Yet, in order to focus on tackling the disease, the EU will want to first find a solution to the problem at its border, the results of which can be expected to take place Tuesday, during the trilateral summit of President Recep Tayyip Erdoğan, German Chancellor Angela Merkel and French President Emmanuel Macron.

The three leaders will discuss the refugee crisis, the Syrian province Idlib and Turkey-EU relations in a video conference. The meeting was set to take place in Istanbul but was later adjusted amid coronavirus fears.

“The EU currently is under the heavy pressure due to the coronavirus outbreak and cannot afford another pressure element. Therefore it will try to find a solution to the refugee crisis by trying to keep these people away and will take measures to reach its goal,” Enes Bayraklı, director of European Studies at the Foundation for Political, Economic and Social Research (SETA), told Daily Sabah, adding that footage of Greek border police violating asylum-seekers' human rights at the EU’s southern border had pressured the EU in the international arena.

The European Union and NATO have to support the protection of civilians and the establishment of a cease-fire in war-torn Syria’s northwestern Idlib province, Erdoğan said last week on his return from Brussels.

The main topic to be discussed in the video teleconference is the updating of the March 18, 2016 agreement, which covered a variety of issues between the EU and Turkey. According to the deal, Turkey was promised a total of 6 billion euros ($6.8 million) in financial aid to be used to finance projects for Syrian refugees. The funds were initially designated to be given to the country in two stages and Erdoğan seeks to have their transfer expedited. The deal helps Turkey stem the influx of refugees to Europe, as it is the main route for refugees trying to cross into the EU since the beginning of the civil war in Syria. With the agreement, irregular arrivals decreased by 99%, saving the lives of many who would have attempted the treacherous journey by sea.

Other topics from the deal that will be discussed include the modernizing of the EU-Turkey customs union, the promised visa-free travel for Turks in Schengen and the revival of negotiations for Turkey's accession into the EU.

“There are views in the EU that the issue of the migration crisis and the Turkey-EU relations have to be separated. The EU had not fulfilled its promises previously, so Turkey will be expecting concrete steps from now on,” Bayraklı added, indicating that the fulfillment of promises to Turkey could enter yet another process of stalling.

“If the EU delivers on its promises made to us, then we will, of course, respond in kind,” Erdoğan said late Monday as he returned to Turkey. “We’ve been asking for a fair share of the burden. Unfortunately, they are not lifting visas for a country like Turkey but doing that for Latin American countries, the Balkans and Ukraine.”

“The measures the EU will take against refugees will only freeze the problem but not solve it in the long term,” Bayraklı underlined, “What is at the base of the refugee crisis, is the Syrian crisis. As long as this is not solved, conflict will persist.”

The expert further elaborated that as long as the EU does not support Turkey in a solution to the Syrian crisis by means of diplomacy and a constitution, the Assad regime will continue to seek a military solution, which would cause other major refugee waves.

“Political and economic support to Turkey is of high importance. A no-fly zone would also be a significant step and would convey a message to the other side (the Assad regime and its backers Russia and Iran),” Bayraklı continued, saying that a permanent solution is not only an advantage to Turkey but also to the EU. “Yet, the EU always lacked a joint decision-making process when it comes to the bloc’s foreign policy issues,” he indicated.

Tensions between Turkey and the bloc flared as fierce fighting in northwestern Syria killed more than 50 Turkish soldiers and threatened to send a new wave of refugees over Turkey’s southern frontier, in addition to the 1 million that had already been displaced due to the assault by the Bashar Assad regime on Idlib since December. The Turkish soldiers were stationed to protect local civilians, whose safety had been guaranteed as part of a 2018 deal with Russia. In response to the international community’s silence toward the regime’s attacks on Turkish soldiers and Syrian civilians, Turkey announced last month that it would no longer try to stop refugees from reaching Europe via land while continuing to ban dangerous boat crossings. That act threatens a repeat of the refugee crisis of 2015 that helped fuel populism and anti-EU sentiment across the bloc.

Greece's response toward the flow of migrants has been harsh, with at least three killed by the country's security forces and countless others battered and teargassed on the land border with Turkey.

Around 10,000 people are struggling in the cold, spending their nights in tents near the border. Their eyes are focused on the outcome of the trilateral summit Tuesday. Refugees have already waited 18 days for Europe to take them in at the Greek border, despite the harsh treatment by security forces.

Greece suspended all asylum applications for one month beginning March 1 and said it would detain new arrivals in closed detention centers prior to deporting them to their countries of origin.