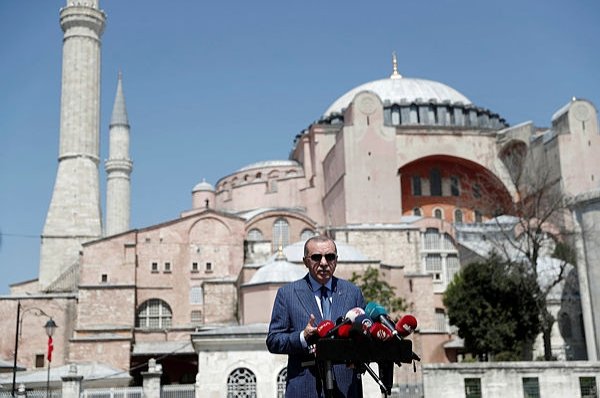 The invitation of the head of the Nationalist Movement Party (MHP) Devlet Bahçeli to Good Party (IP) leader Meral Akşener for merging the two parties can be interpreted as a step toward establishing unity in Turkish society, President Recep Tayyip Erdoğan said Friday.

Responding to journalists' questions following Friday prayers at Hagia Sophia Grand Mosque, Erdoğan stated that in his opinion, Bahçeli's invitation was quite "innocent" and can "hopefully" pave the way for societal unity.

"I did not find the invitation strange at all. It was a call of the most innocent nature," he said.

On Aug. 4, upon Akşener's welcoming of Hagia Sophia's reversion to a mosque, Bahçeli stated that despite her previous wrongdoings, it is time for Akşener to "return home," referring to the politician's prior ties with the MHP.

Immediately responding to the call, Akşener accused Bahçeli of attacking herself and her party, the IP, and said that his preference of leaning on "political magazine" rather than real issues does not suit political courtesy.

The IP is an offshoot of the nationalist MHP formed when a group of party members split from the MHP due to Bahçeli's cooperation with the ruling Justice and Development Party (AK Party). Having failed to dislodge Bahçeli in a heated judicial process, MHP dissidents left the party in 2016 and established IP under Akşener's leadership in October 2017.

Much like its parent party, the IP had a nationalist stance, yet drifted away from its initial raison d'etre by cooperating with the center left-secular main opposition Republican People's Party (CHP).

Erdoğan also mentioned the recent reports on the veteran politician, former presidential candidate and former deputy of CHP Muharrem Ince's intention to form a new party, expressing that it is Ince's "most natural right to do so."

“A new republican recovery is a must. Turkey is not doomed to be this way,” the Cumhuriyet newspaper quoted Ince as saying.

“A new movement, which will be the first in popularity, can be created in a matter of four to five months,” Ince was quoted as telling people in his close circles.

Ince was elected four consecutive times in 2002, 2007, 2011 and 2015 as a CHP deputy for his hometown of northwestern Yalova. He also served as the CHP's parliamentary group deputy chairman for two terms. Ince challenged the CHP's incumbent chairman Kemal Kılıçdaroğlu twice, first in September 2014 following the party's loss in the Turkish presidential election and later in February 2018. As the presidential candidate for the main opposition party in the 2018 Turkish presidential election, Ince received just over 30% of the votes, coming in second behind the first-round winner, incumbent President Recep Tayyip Erdoğan, with 53%.