Erdoğan, Putin to meet as power struggle in the field in Syria drags on 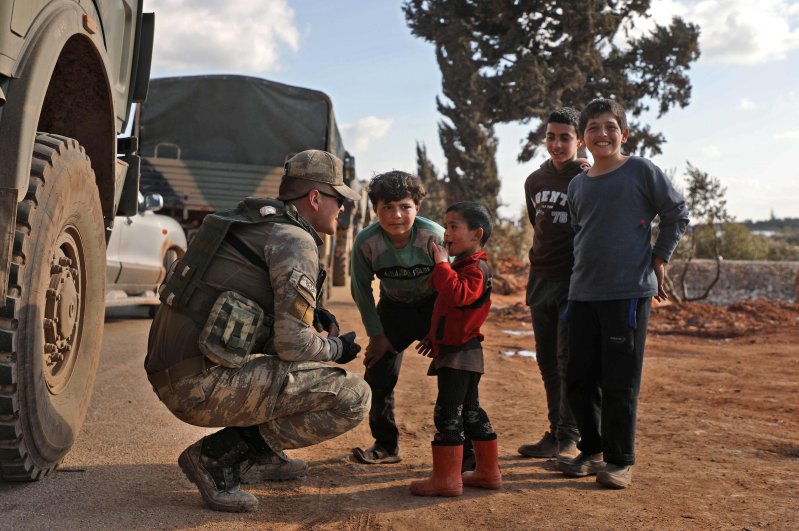 A Turkish soldier speaks to displaced Syrians near the town of Batabu on the highway linking Idlib to the Syrian Bab al-Hawa border crossing with Turkey, on March 2, 2020. (AFP Photo)
by Dilara Aslan Mar 04, 2020 2:09 pm
Edited By Dilara Aslan

As both sides seek to avoid further escalation and aggression in Syria's Idlib, the Turkish and Russian presidents will meet to discuss recent developments in the region while the power struggle on the field is expected to affect the outcome of the diplomatic talks

In the midst of the recent conflict escalation in war-ravaged Syria, President Recep Tayyip Erdoğan and his Russian counterpart Vladimir Putin are poised to meet in Moscow on Thursday. The meeting will be unlike previous get-togethers of the two leaders. The meeting will take place in a tenser atmosphere while the power wrangle on the field for Idlib will continue, analysts projected.

“This is a tension that harbors the risk of coming to a faceoff. The previous meetings between the two leaders always played a role that facilitated situations, yet now everyone is trying to gain territory as the meeting draws near and both sides know that their performance on the field will affect the negotiating table,” said Oytun Orhan, of the Center for Middle Eastern Strategic Studies (ORSAM), in an interview with Daily Sabah.

The recent rise in hostilities, bringing Russia and Turkey face to face, stems from the Bashar Assad regime’s latest assault trying to regain control of the last opposition bastion Idlib in northern Syria. The region was declared a de-escalation zone in a 2018 agreement between Russia and Turkey, yet ignoring the efforts for peace, the regime backed by the Russian air force, advanced, killing hundreds of civilians and 59 Turkish soldiers who were in the field to protect innocent civilians within the scope of the agreement and stop the regime.

The attack last week marked the deadliest day for the Turkish military since Ankara first entered the Syrian conflict in 2016. It also was the most serious escalation between Turkish and Russian-backed Syrian forces.

“The two sides are testing each other’s limits on the Idlib ground,” Hüseyin Alptekin, a researcher at the Foundation for Political, Economic and Social Research (SETA), told Daily Sabah. “The meeting will not be similar to previous meetings as Sochi or Astana.”

Alptekin highlighted that both sides have maximalist demands as Turkey wants to turn back to Sochi, stop aggression and for the regime to clear out of Idlib while Russia, on the other side, wants the regime to control the northwestern province.

Turkey aims to reach a peaceful political solution in Idlib at a meeting with Russia on Thursday, said the Turkish defense minister on Wednesday.

"Turkey's military activities in Syria continue as planned, and our soldiers are fulfilling their duties with heroism," Hulusi Akar told reporters in Parliament in reference to the country's operations in the region. Akar added that Turkey's expectation from Russia as a guarantor country is to influence the regime to fulfill its commitments, stop its attacks and comply with the Sochi agreement.

He noted that the activities were carried out with the aim of ensuring a cease-fire, preventing migration, ending the humanitarian crisis in the region and ensuring the safety and security of the forces, the people and the borders.

Upon the attack that killed 36 Turkish soldiers, Erdoğan and Putin spoke over the phone to try to defuse tensions. Erdoğan said that Russia should stay out of Turkey's fight against the Assad regime in Syria. Ankara launched Operation Spring Shield on March 1, after incessant violations of the Idlib cease-fire, including attacks on Turkish observation posts and soldiers.

“Operation Peace Spring shows that Turkey is ready to pay every cost and opposition forces have had significant gains,” Orhan said, further elaborating that both sides strive not to come directly face to face and frequently voice that they do not intend to go to war.

Turkish officials have been warning Russia and other countries that the humanitarian crisis in Idlib threatens its national security and would create another refugee influx at its borders. Yet, in the face of the international community’s silence toward the regime’s attacks, civilians, hospitals, schools and other vital facilities continued to come under bombardment.

“Turkey is, meanwhile, increasing the cost of war for Russia by damaging multiple aircraft and causing losses in the regime. Assad is running out of personnel and military equipment, and it needs Russia to resupply these,” Alptekin added.

Russia claimed Turkey is failing to meet its obligations under a pact to create a demilitarized zone in Idlib, as Turkish officials urge Moscow to push the Assad regime to uphold the cease-fire as per the Sochi deal and halt attacks on civilians.

Sochi is a temporary instrument for something to build upon and for Russia a way to avoid a direct clash, Alptekin said.

“A new balance has emerged on the field in Idlib; Russia faces a new scene, which could lead to new proposals,” Orhan said. He further stressed that there is hope for a new cease-fire even though a final decision could not be reached immediately.

The regime’s military capacity has taken a huge blow since Turkey’s operation started. Turkish forces neutralized 3,136 regime elements in Syria since the start of the operation in the northwestern Idlib region, the Defense Ministry said in a separate statement Wednesday.

As the power struggle on the field between Turkey and Russia continues, the two leaders will most probably try to find a way to end the current conflict giving losses to both sides.

“I don’t expect a final deal; it will rather be the start of a process. We’ll see more meetings. The continuation of conflict would have a heavy cost for both Turkey and Russia while Turkey has logistical advantages and an army on alarm that can hit areas in Syria without even crossing the border,” Alptekin added, saying that a safe zone in Idlib should also make Russia happy as it will also be safe from Hayat Tahrir al-Sham (HTS) terrorists.

It has been months now since regime forces sped up attacks on Idlib, targeting innocent civilians under the pretext of fighting terrorists. However, the regime is not alone in its attacks, ongoing since April 2019, as its backer, Russia, is often active on the ground, aggravating the humanitarian crisis. According to U.N. figures, nearly a million have been displaced, fleeing from the regime’s and Russia’s attacks toward safer areas near the Turkish border.

The regime and its supporters have been violating the Sochi agreement that was reached on Sept. 17, 2018, by Turkey and Russia. According to the agreement, the cease-fire in the Idlib region would be preserved, with the withdrawal of heavy arms and radicals from the region.