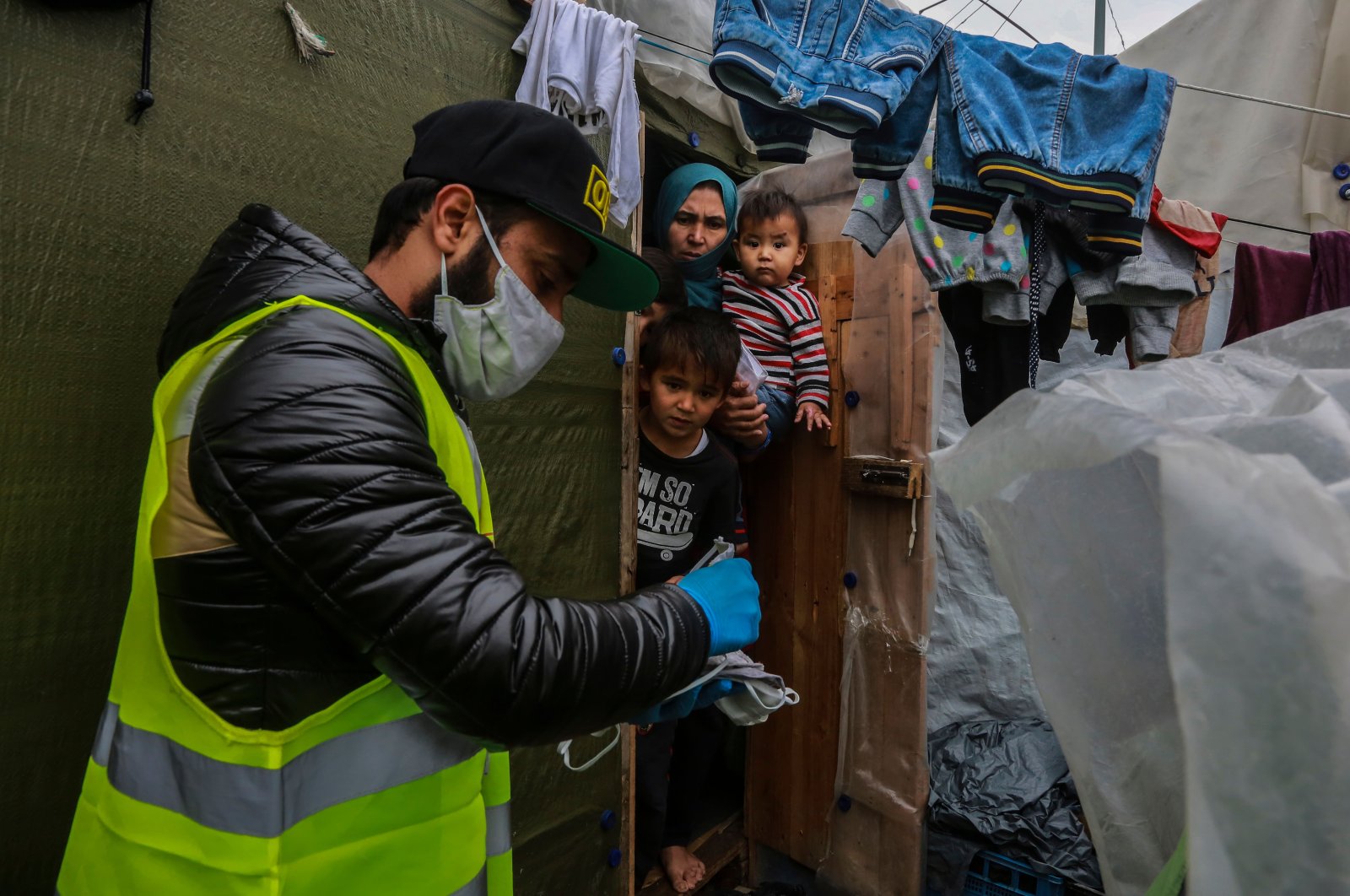 A member of nongovernmental organization "Team Humanity" shares handmade protective face masks with migrants and refugees in the camp of Moria on the island of Lesbos on Saturday, March 28, 2020 (AFP Photo)
by DAILY SABAH Apr 03, 2020 11:04 am
Edited By Dilara Aslan
RECOMMENDED

At least two men were killed last month and a woman remains missing at the Turkish-Greek border after Greek border forces fired live ammunition and tear gas at asylum-seekers and other migrants struggling to cross to Europe, Amnesty International said.

“People traveled from Turkey to Greece to seek safety, yet they were met with violence so serious that at least two were tragically killed. Allegations of violence must be promptly and impartially investigated. Everyone should be treated humanely, shielded from violence and be granted access to protection in the countries where they are seeking safety” said Massimo Moratti, deputy director of the Amnesty International Europe Regional Office in a report published on Friday.

In response to the lack of humanitarian and financial aid from the international community and the attack on Turkish soldiers in Syria, Ankara last month began allowing migrants to freely cross its land borders to Europe. Turkey already hosts the world’s largest number of Syrian refugees and had frequently warned that it would not be able to accommodate another refugee wave.

Since then, thousands of people have flocked to the Turkish province of Edirne along the border with Greece and Bulgaria to try to make their way into Europe. Most recently, Turkish authorities recently temporarily settled a large number of refugees and migrants, previously waiting at the Greek border, at repatriation centers to prevent the spread of the coronavirus.

The Greek reaction to the influx of people at its border has been harsh, including physical attacks, spraying tear gas and killing several people who attempted to cross to Greece from Turkey.

Turkey condemned the abuse and said the European Union seems to have lost its basic values of human rights. During the surge in violence toward the people struggling to cross to Europe, Turkey reported that Greek forces killed some migrants. Yet, Athens has denied allegations that its forces fired upon the migrants.

Amnesty International, however, confirmed the deaths of two men at the Greek-Turkish land border on March 2 and 4.

Accordingly, a third person, Fatma (not her real name) from Syria, is missing and presumed dead after she was separated from her husband and six children while attempting to cross the Maritsa river, south of Edirne, to enter Greece. Ahmed (not his real name) told Amnesty International that his wife has been missing, presumed dead after Greek soldiers fired shots at her as she attempted to join her children on the Greek side of the river.

Ahmed told Amnesty International that Greek authorities subsequently detained him and their children for four or five hours, during which they were stripped and had their possessions confiscated, the report said. They were then driven back to the river and put in a wooden boat that took them and others back to the Turkish side. Despite enlisting lawyers in both countries to find out what happened to his wife, Ahmed has been unable to determine her whereabouts or fate.

“Muhammad Gulzari, a 43-year-old man from Pakistan, was shot in the chest as he attempted to cross into Greece at the Pazarkule-Kastanies border crossing point, and pronounced dead in a Turkish hospital on March 4 in an incident which saw five others injured with gunshot wounds. A 22-year-old Syrian man, Muhammad al-Arab, also died in the area. His killing was documented by Forensic Architecture,” Amnesty reported.

Asylum-seekers and migrants told Amnesty International that border forces also took their money and belongings, in some cases thousands of dollars and their only savings, with which they had hoped to start a new life in Europe.

Greece has been widely criticized for using excessive force, including the firing of water cannons and tear gas to repel incoming migrants. The Human Rights Watch urged Greece and the EU to respect human rights in light of Turkey's new policy of refusing to halt migrants and refugees trying to leave for Greece. The international human rights group also criticized a decision by Athens to suspend new asylum applications until April and summarily deport those arriving in last month's surge. Also, inhumane conditions in Greece’s refugee camps have been another point of heavy criticism.

“This violent response was not limited to the border areas,” Amnesty added, saying that one man from eastern Syria’s Deir el-Zour, told Amnesty International about his experience of crossing into Greece on March 4. “I crossed the river and walked inside Greece for four days and four nights before I was caught. They drove me to a place where they beat me and took my phone and money, 2000 Lira ($298), it was all I had. They took me back across the river to Turkey and left me there without a coat or shoes,” the asylum-seeker told Amnesty.

“In Lesvos alone, around 500 people – including over 200 children – who arrived by sea were held for over 10 days on a Greek Navy ship normally used to transport tanks and other military vehicles. Hundreds more asylum-seekers and migrants were held in other port facilities across the Aegean,” Amnesty said, adding that those detained on the islands were eventually transferred to bigger detention centers on mainland Greece on March 20 where they are currently held pending return decisions and unable to claim asylum.

Moratti urged Greece to quickly change course and allow all new arrivals to access asylum procedures and basic services. “They must move people from detention facilities and unsanitary camps to safe and adequate accommodation. The rapid spread of COVID-19 has only made that more urgent,” said Moratti, “European countries should effectively and meaningfully relocate asylum-seekers from Greece and resettle refugees from Turkey. With the correct public health checks and quarantines in place, COVID-19 need not be a barrier to providing safety to people forced to flee their homes.”