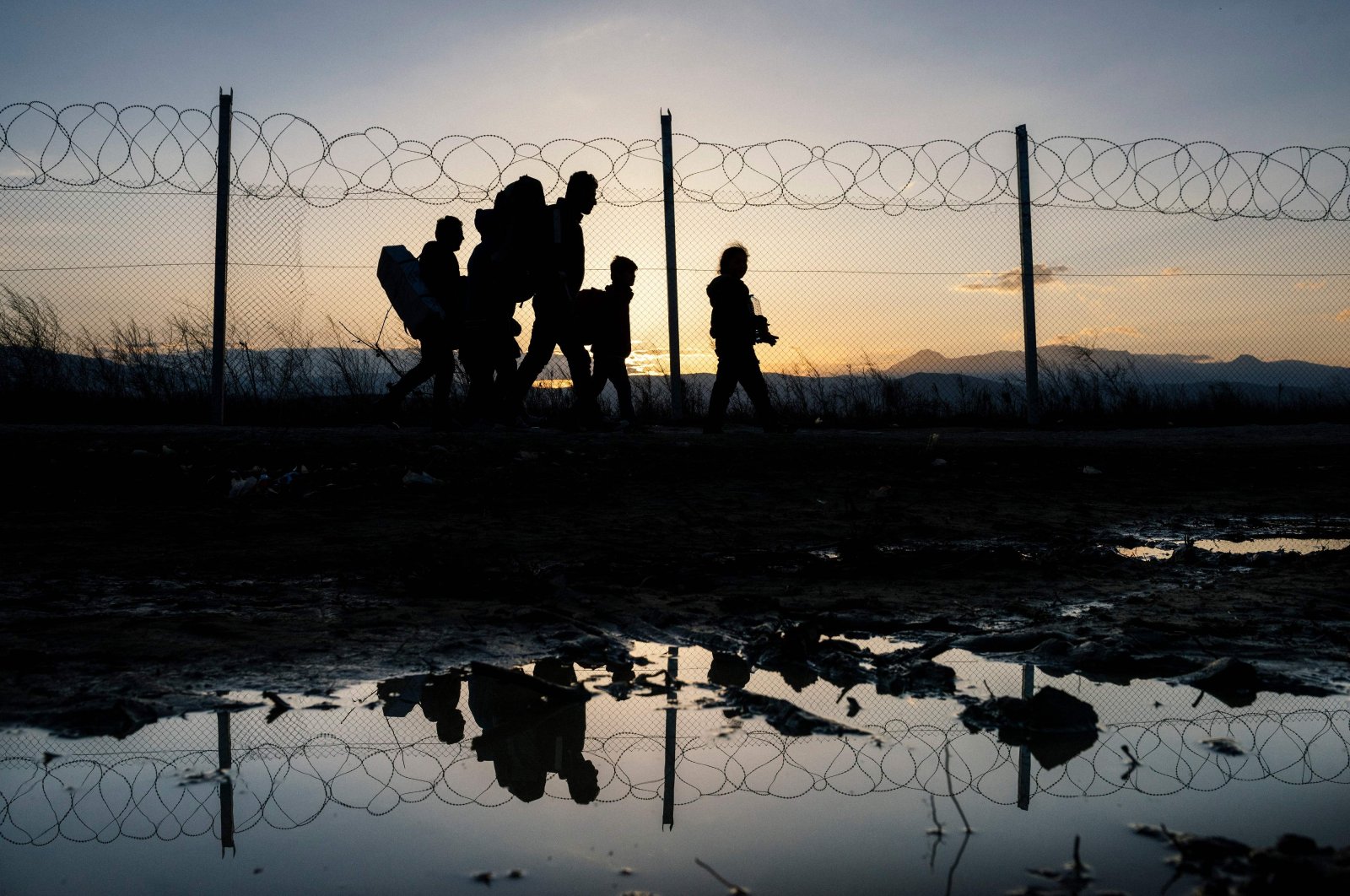 In this file photo, refugees walk to a registration camp after crossing the Greek-Macedonian border, near the town of Gevgelija, after Macedonia allowed around 250 migrants to cross its border with Greece, as 10,000 more were left waiting in miserable conditions, March 2, 2016. (AFP Photo)
by French Press Agency - AFP Sep 27, 2020 2:20 pm
RECOMMENDED

Greece's government has cautiously welcomed a plan from Brussels to reform the European Union's shaky asylum system, but charity groups working with refugees on the ground have blasted Greece's continued "outrageous containment policy."

The New Pact on Migration and Asylum, unveiled Wednesday, calls for a tougher stance on returning migrants who do not have the right to stay in the EU and ratchets up border controls.

The EU plan is good news for Prime Minister Kyriakos Mitsotakis' conservative government, which has been operating a harsh migration policy since taking power over a year ago.

The only flaw in the plan from Greece's perspective is giving up on quota-based redistribution of asylum-seekers among EU countries – a plan first mooted during the migration crisis of 2015 but which foundered on opposition from several member states.

Mitsotakis himself has reiterated calls for a "balanced asylum policy" and highlighted "the need to share responsibilities in a fair way."

Like Italy and Spain, Greece's position on the EU's southern edge makes it one of the major points of arrival in the bloc for migrants.

Its geography has made it a relentless defender of the idea that asylum-seekers – who arrive almost daily on the country's Aegean Sea islands from neighboring Turkey – should be shared fairly.

The Greek government has long struggled to manage overcrowding in camps on the five islands most affected by the arrivals, especially since the Moria camp on Lesbos burned down on Sept. 8 and 9.

Half of the 24,000 migrants packed into Greek camps remain on Lesbos.

Authorities rushed to set up a provisional site for those left without shelter by the blaze, but charity groups are already incensed at conditions there.

"The European Commission promised 'no more Moria,' while building a new containment camp in Lesbos, where conditions are dire," tweeted the Legal Centre Lesbos, which provides legal information and assistance to migrants on the island.

Other groups working with migrants on the ground pointed out the arduous lines people must stand in to receive one meal per day, the lack of mattresses and the impossibility of respecting coronavirus infection control measures like social distancing.

"We have continuously exposed the human cost of this outrageous containment policy to leaders in European capitals, to commissioners in Brussels and to citizens through the media, but nothing seems to lead to a desperately needed radical policy change," Doctors Without Borders (MSF) President Christos Christou tweeted.

"Enough is enough. No more lies," he added.

MSF is one of only a few organizations allowed by Greek authorities to come to the aid of asylum-seekers left to sleep by the side of the road after Moria was destroyed.

So far almost 9,400 people have moved into the new temporary camp on Lesbos, the Greek section of the U.N. Refugee Agency (UNHCR) said.

Spokesperson Stella Nanou told Agence France-Presse (AFP) that authorities must "put an end to the precarious situation for thousands of refugees in the Greek islands and ... accelerate their safe and orderly transfer to suitable accommodation in the mainland."

Greece has already transferred thousands off the islands since early 2020, but the camps remain under intense pressure.

On Wednesday, Migration Minister Notis Mitarachi said a camp hosting 1,000 vulnerable refugees on Lesbos would be closed, as well as a volunteer-run accommodation known as Pikpa.

The Pikpa camp was founded in 2012 by migrant champion Efi Latsoudi, a joint winner in 2016 of the UNHCR's Nansen Refugee Award.

"Such alternative accommodation facilities should be maintained until a more viable solution is secured," UNHCR spokesperson Nanou said.