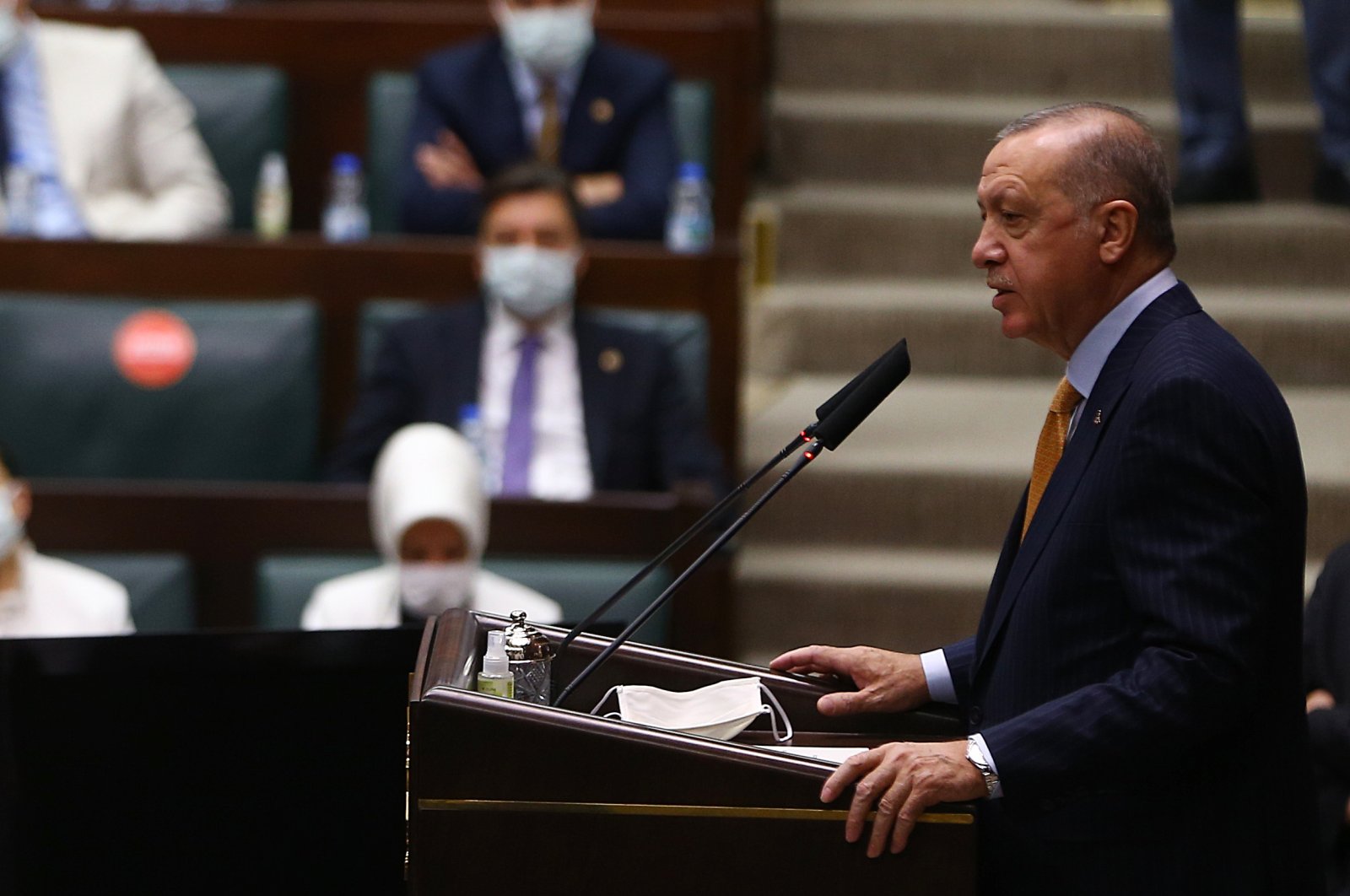 After all these years they want to relaunch a crusade against Islam, President Recep Tayyip Erdoğan said Wednesday regarding the latest Islamophobic moves in European countries, particularly France.

"I don’t even need to say anything about these ‘dishonorable’ people who dare to mock our prophet through so-called caricatures," the president said during the ruling Justice and Development Party's (AK Party) parliamentary group meeting in Ankara.

"We are a nation that respects not only our own religion but also the values of other religions as well. It is our values that are being targeted," he added.

Erdoğan highlighted that freedom of speech has nothing to do with insulting the Prophet Muhammad. "No matter what they do, we will not give up on defending the rightful cause," he continued.

The president emphasized that Europe's latest moves go against the values they claim to purport.

"European countries do not even feel the need to cover up their hatred toward Islam anymore," he added.

"France and Europe, in general, do not deserve the vicious, provocative, hateful policies of (French President Emmanuel) Macron and those who follow the same mentality," Erdoğan continued.

Macron last week said he won’t prevent the publication of cartoons insulting the Prophet Muhammad under the pretext of freedom of expression, a statement that sparked outrage in the Arab and Muslim world.

France recently launched an extensive witch hunt against the Muslim community following Macron's remarks characterizing Islam as a problematic religion that needs to be contained.

Many nongovernmental organizations (NGOs) and mosques have been shut down in the last two weeks, while assaults against Muslims have spiked.

Macron this month also described Islam as a religion “in crisis” worldwide and said the government would present a bill in December to strengthen a 1905 law that officially separated church and state in France.

He announced stricter oversight on schooling and better control over foreign funding of mosques. But the debate over the role of Islam in France reached new intensity after the beheading of teacher Samuel Paty, which prosecutors say was carried out by an 18-year-old Chechen who had contact with a terrorist in Syria.

After blasting Europe for its anti-Muslim sentiments, Erdoğan added: "Now they personally target me."

"Charlie Hebdo just published a series of so-called cartoons full of despicable images purportedly of our President. We condemn this most disgusting effort by this publication to spread its cultural racism and hatred," Turkey's Communications Director Fahrettin Altun said on Twitter.

While underscoring Turkey's position of being opposed to any violence and acts of terrorism against civilians, he said: "We will not remain silent in the face of disgusting attacks on our culture and religion no matter where it comes from."

"We call on all sensible European friends to fight back against this kind of primitive cultural racism, intellectual barrenness and uncivilized discourse."

Earlier this year, it republished cartoons insulting Islam and Prophet Muhammad. The caricatures were first published in 2006 by the Danish newspaper Jyllands-Posten, sparking a wave of protests.

Turkey is not the only country that has reacted against Macron and Europe's welcoming of Islamophobia.

“Insulting the prophet is no achievement. It’s immoral. It’s encouraging violence,” Rouhani said in a televised speech during the weekly Cabinet meeting.

“It’s a surprise that this would come from those claiming culture and democracy, that they would somehow, even if unintentionally, encourage violence and bloodshed,” he added.

Rouhani said, “The West should understand that ... insulting the prophet is insulting all Muslims, all prophets, all human values, and trampling ethics."

He added that “every single European is in debt to the prophet, as he was the teacher of humanity."

Rouhani also called on the West to “stop interfering in Muslims’ internal affairs” if it “truly seeks to achieve peace, equality, calm and security in today’s societies."

Iran on Tuesday summoned a senior French envoy, the charge d’affaires, to protest the “unacceptable behavior of the French authorities," after a chorus of criticism aimed at Macron from top Iranian officials in recent days.

Saudi Arabia’s Cabinet, on the other hand, renewed on Tuesday its refusal of any attempt to link Islam and terrorism, it said in a statement.

The statement did not refer to calls in some Muslim countries for a boycott of French products over images being displayed in France of the prophet.

The statement added that the Cabinet also renewed “its condemnation and rejection of every terrorist act or practices and actions that generate hatred, violence and extremism,” while affirming that intellectual freedom is a means of respect, tolerance and peace.

Previously, Pakistan summoned the French ambassador in Islamabad on Monday in reaction to Macron.

"The seeds of hate that are being cultivated today will polarize society and have serious consequences," Pakistani Foreign Minister Shah Mehmood Qureshi said in a statement.

The move came a day after Pakistan's Prime Minister Imran Khan wrote a letter to Facebook's chief Mark Zuckerberg seeking a ban on Islamophobic content similar to that in place for Holocaust denial content.

The Grand Imam of Egypt's al-Azhar on Wednesday also strongly rejected the use of anti-Muslim sentiment to rally votes in elections following images being displayed in France of the Prophet Muhammad.

Sheikh Ahmed al-Tayeb, who sits at the head of the 1,000-year-old seat of Sunni Muslim learning, also called on the international community to criminalize "anti-Muslim" acts.

While the Grand Imam blasted the move, Egyptian President Abdel-Fattah el-Sissi said Wednesday that he rejects any form of violence or terrorism from anyone in the name of defending religion.

"Abusing prophets and messengers is contempt for noble religious values," al-Sissi told a ceremony to celebrate the birthday of the prophet.

"We cannot imagine that 1.5 billion Muslims bear the sins and evils of a small group that has deviated.

"It is our right that our feelings and values are not hurt.

"If people have the right to express what is in their minds, I think that should stop when it comes to hurting the feelings of more than 1.5 billion Muslims."