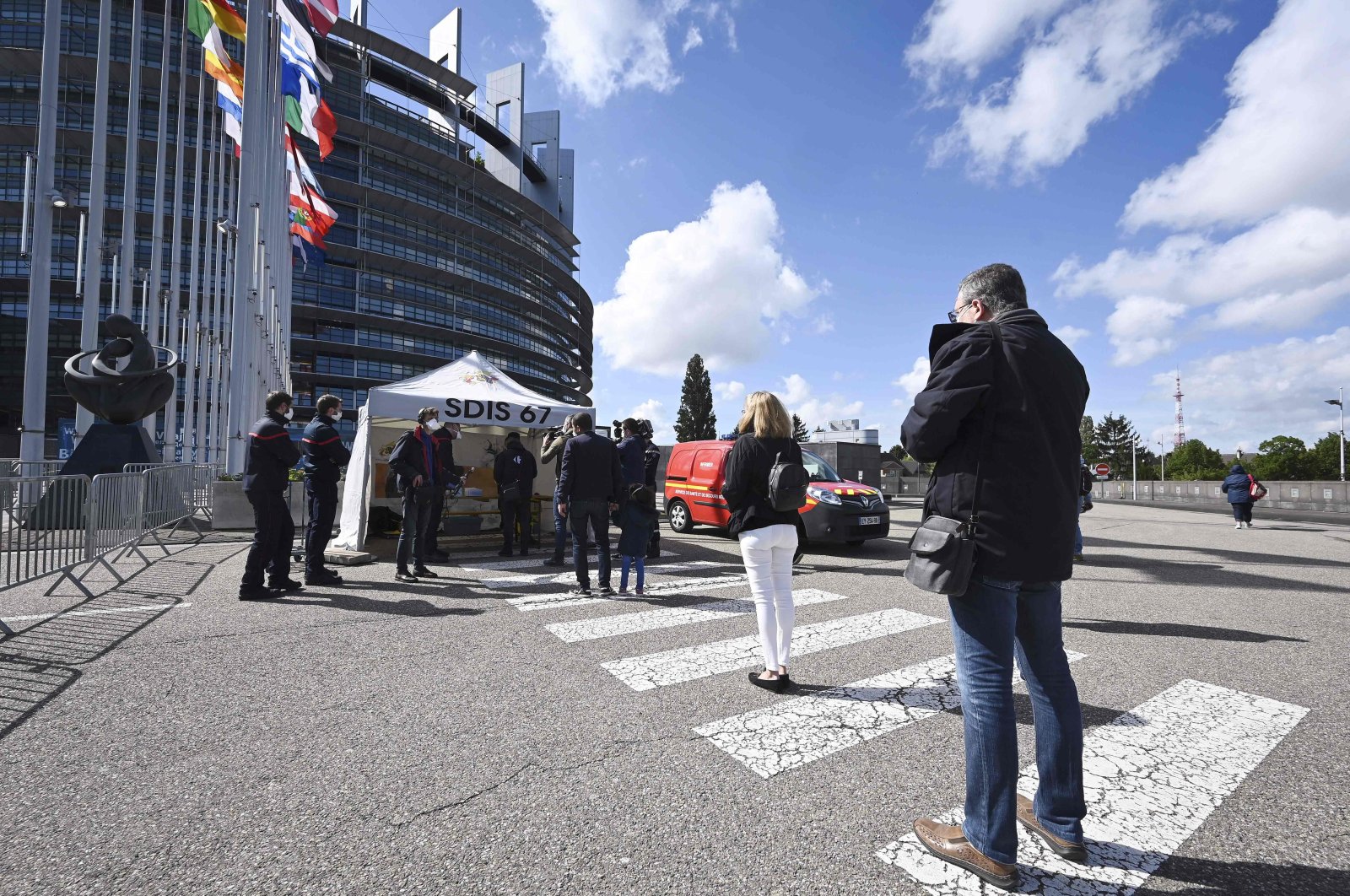 People queue at the entrance of a COVID-19 testing center set up at the European Parliament, Strasbourg, eastern France, May 12, 2020. (AFP Photo)
by DAILY SABAH WITH AA May 13, 2020 1:38 pm
Edited By Dilara Aslan
RECOMMENDED

A member of the European Parliament on Wednesday praised Turkey for providing immediate medical supplies to the coronavirus-hit European Union.

Speaking to Anadolu Agency (AA), Ryszard Czarnecki, a member of the European Parliament (EP) and its former vice president, said the EP appreciates the generosity of the Turkish people.

"Turkey has exhibited a significant example of solidarity with the EU by providing immediate medical supplies for the global fight against the coronavirus," Czarnecki stated.

"This approach demonstrates that Turkey is a reliable partner and ally even in tough times," he added.

Czarnecki said the pandemic probably will affect how the EU will deal with Turkey as the outbreak has already been changing the priorities of governments.

Calling himself "a friend of Turkey," Czarnecki said he and his colleagues are interested in setting up an EU-Turkey friendship group in the EP when it returns to its normal work routine.

"Our aim is to enhance the existing relationship between the EU and Turkey in economic, political and cultural fields," he added.

Speaking on Europe Day, celebrated on May 9, Czarnecki said Turkish President (Recep Tayyip) Erdoğan's message, stressing the ideas behind the Schuman Declaration, which in 1950 proposed the formation of a European Coal and Steel Community as the predecessor to the EU, was "interesting."

The Western countries were able to set aside their hostility and differences in the 1950s, he said, noting his country Poland was under the control of the Soviets at the time, while it is an EU member today. He added that he sees how important Turkey is for the EU.

"The issues that we have to deal with together are numerous," he said. "Whether it is instability in northern Africa, migratory pressures from the Middle East or now the new threat of viral pandemics, we need to work together."

Many people in the EU are disappointed by the health systems, Czarnecki said, noting that the EU should get ready for a similar pandemic in the future.

"In the EU but I assume also in Turkey, public health services will be subsidized more than ever before," he said.

Czarnecki also stressed that the private sector in Turkey could provide more protective equipment and medical supplies, adding, "In this context, it might be useful to look again at the modernization of the customs union between the EU and Turkey."

As the fight against the pandemic continues, Turkey has come to the forefront as a humanitarian leader, while still maintaining its domestic success against the virus. Around two-thirds of the world have requested medical supplies from Turkey to fight the coronavirus, and nearly half of the requests have been met, Turkey's foreign minister said last week. A total of 128 countries have requested medical supplies from Turkey in the form of grants, export permits or purchases, Foreign Minister Mevlüt Çavuşoğlu said in a televised interview. Underlining that nearly 64 countries have received coronavirus aid from Turkey, Çavuşoğlu said he recently spoke to Health Minister Fahrettin Koca on how to meet more countries' requests for medical supplies. The huge number of humanitarian aid requests from around the world "shows that Turkey is a reliable source and a true friend," Çavuşoğlu added.